I must start by wishing regular customer and friend Graham a full and speedy recovery from his operation.

This week has been mostly about epics, the Guard cavalry set for (New) Tony and the addition of more command figures for my own collection. I started with the Empress Dragoons and followed up with the Grenadiers a cheval and today I'll be painting the Guard Horse artillery battery of 3 guns and crews, next week will be the Chasseur a cheval and Polish lancers, I'm told the Dutch lancers will also be coming my way. Whilst I do have some reservations about the soft resin material these are made from they do paint up very well. The swords and horses legs are pretty 'bendy' but not brittle so should be OK with careful handling. These are going on the warlord supplied 60 x 20mm bases, by comparison my own cavalry are based on 60 x 30mm MDF which does help with the handling somewhat.

A question for my readers here who know more about this period than I do, should the trumpeters of the Guard cavalry be in the Green livery for Waterloo or the light blue coats? Every image I found showed them as painted below but a French chap on FB said they should be wearing green? I hope I'm right but can correct if required and the customer wishes.

As I wanted the black horses of the Grenadiers to pop a little, I tried something a bit different to my usual black with black grey highlights and used Vallejo Glossy Black highlights instead which once matt varnished still retained a nice realistic sheen, one to note! The blue coats do look slightly bright in these shots. 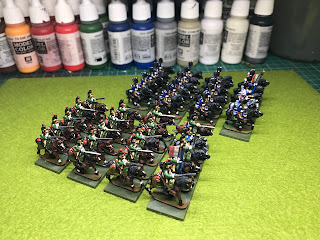 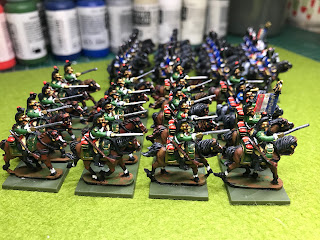 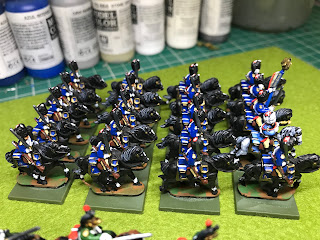 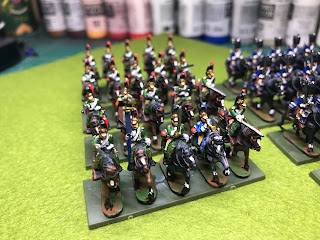 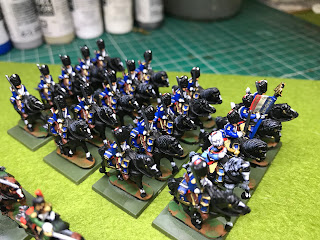 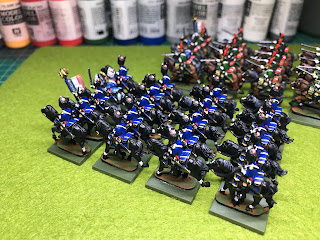 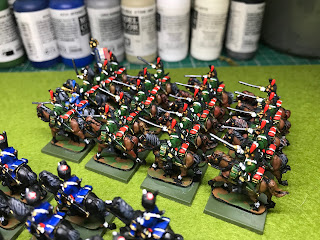 Having recently discovered that the old Chariot Miniatures 15mm range fit very well with the epics I am taking the plunge and painting additional command strips for my infantry bases. The lack of flags had been bothering me, especially for DBN, so this is the prefect solution. Plan is to paint just the front command strips then use existing flagless bases to create the rear ranks. They do look much better this way. I think that Magister Militum - who own the Chariot range - will be selling quite a number of the command packs judging by the number of people using smaller units and looking for a solution. 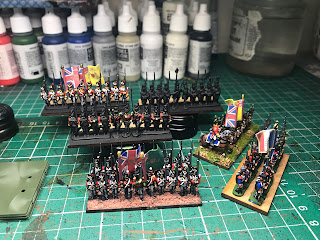 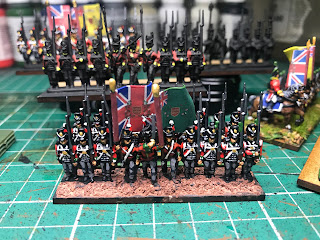 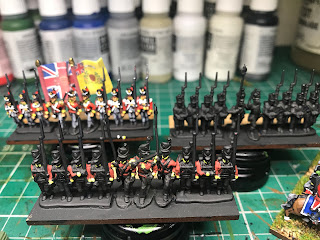 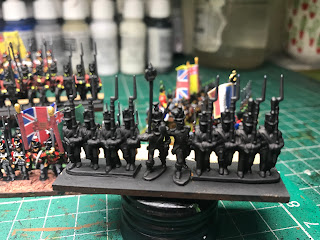 On a slightly different theme I came across these lovely old photos the other day of my Dad during National Service (on the right)  and family. I think this would have been around late 1940's as he is now a sprightly 93 year old, still driving to the shops and going out for walks! The other photo shows Dad (left, middle) and family members on a day out clearly. Kneeling in front of him is his elder Brother Alfred a veteran of the Normandy Landings, Uncle Alf never once mentioned this to me, as I only learned recently from a cousin he never talked about his experiences of that event. That's my lovely old Nan at the wheel with my Grandfather beside her, he died two years before I was born but I recorded his war service in The Buffs in a post here in 2018 (here). 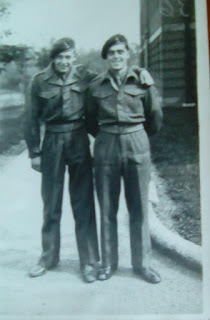 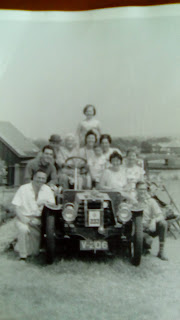