I have now reached the stage where I can begin to relax and enjoy building some suitable terrain for FoW. My Normandy village now comprises several single and double buildings, shops and houses. Having started with the Laser Craft Art model featured below, most are now by 'Arcane Scenery'. Both match well, being designed specifically for FoW base sizes, but the latter models are probably more detailed in that they also provide a laser cut card sheet featuring window and door frames etc that really help to bring the models to life once constructed. The 'Arcane' double shop kit that you can see below took me just slightly under an hour to build, start to finish and I enjoyed it immensely. I decided not to paint the bulk of this one, just a wash on the roof and a bit of paint on the shop signs for contrast. Signs will be printed and added as suitable. 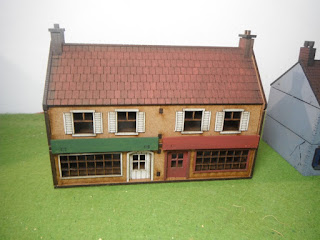 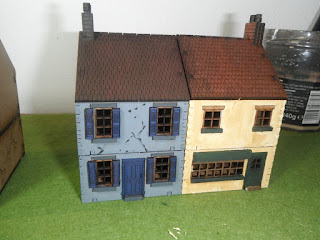 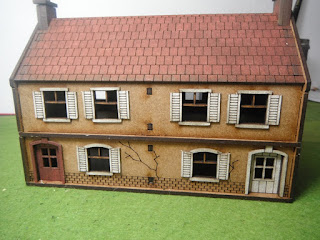 'Hedgerow Hell'.
No representation of the fighting for the Normandy countryside would be complete without areas of the dreaded bocage, hedgerow so dense and tall that it was impossible to see what was lurking behind it. I thought long and hard about how best to do this before deciding upon a combination of front doormat and hedge foliage! I'd seen it done using just the matting, but I wanted to build it up a bit more using clump foliage. The result is as you see so far, but I intend to continue working on it. The matting was cut into thin strips, a thick bead of PVA was then applied to the length of it and it was built up before being allowed to dry thoroughly. I then sprayed everything dark green, after which lighter shades were drybrushed across the upper parts. I'm fairly happy with it overall. Model railway telegraph poles and a few trees would complete the look, maybe that's for the future as for now I just want to get playing. 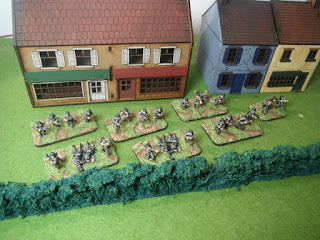 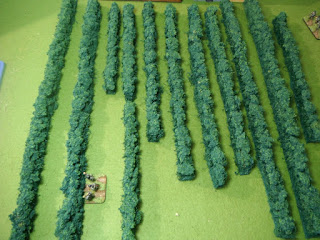 Wheatfield!
I cut a fairly large wheatfield from the matting, as said before I want to keep everything to scale as much as possible so no tiny fields the middle of a vast expanse of green table here, fields will hold a full platoon of tanks or infantry. This field has absorbed no less than THREE bottles of Vallejo paint to get it to this stage, it will be fully based  on 3mm MDF and edged to finish it. 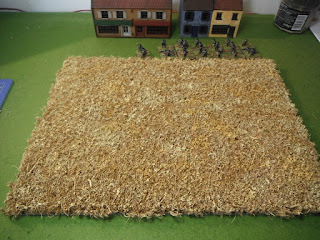 The battlefield.
Plan had been to make the 6 x 4 table by flocking  the bare boards. I had searched everywhere for another of the old Citadel mats as they were a fantastic product, not to be confused with felt mats as sold by S&A scenics, but now long OOP sadly. However, I think I have found another source of a similar high quality grass mat, I'll be ordering one today and will report back on quality. Roads will be cut from 3mm MDF and textured, if anyone has a suggestion for applying tank track marks to roads I'd be grateful to hear it? Trees will be bought from TimeCast as they sell some fine trees, not cheap but very well made and durable. Wood bases will be 3mm MDF thanks to the ever reliable Tony Barr at East Riding Miniatures who has had a few issues with his laser cutter recently, but continues to offer an excellent friendly service.

....and finally.
I have got a few of the new bits together for a few pics, I must say I'm incredibly proud of this collection, I know it will expand into other lists and campaigns, the Russian front beckons for example. I'm just one M10 tank destroyer short as Poppy the pup decided to eat the turret overnight, my fault for leaving it on the table, a replacement should be here tomorrow. The infantry bases you can see are about  to be 'decorated' with some fine silfor/mininatur grass tufts, weeds and blossoms that will transform them I hope. I'll do some comparison pics when finished, not to everyone's taste I know, but they are such fine products. I removed all tanks from their bases! I retain the option of using the bases though, it was just when I sat one on the cornfield visually it bothered me, but I'm still not sure yet. 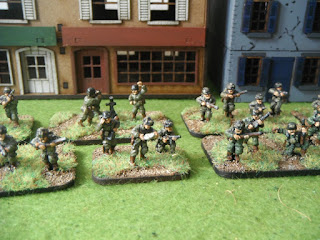 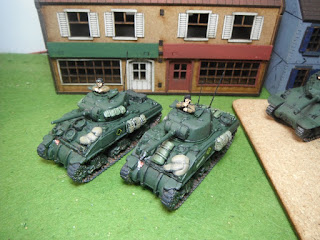 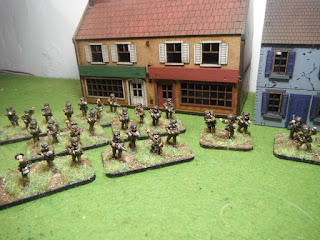 Not being content with the finish of the Laser Craft Art house previously featured here I decided to throw a bit of paint at it last night. Inspired by a property hunting program set in Normandy I went for this painted render look! I hope that a row of such shops and houses in various  subtle tones might look the part once finished, this one still needs tidying up. I have also printed some tiny pre war French posters and shop signs too for further detailing. Some will of course need to be suitably distressed.

Tank is a Sherman 'Firefly' with it's tank busting 17pdr. 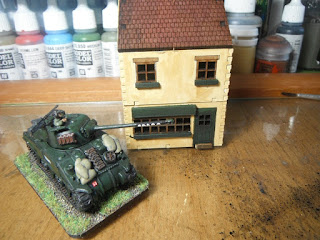 This Summer seems to have flown by, it's hard to believe we are already into September. The weather has finally settled down and we are enjoying some very pleasant days now. I'm working on some bits for John that are required by end of the month for a planned game and also completing the last couple of models for my Flames of War collection. I have on order some Mininatur grass tufts and blossoms that should add the finishing touch to all the bases. Good prices on these products HERE, and the site generally seems to be a useful source of  modelling products, in what it describes as 'scratch builders Paradise'.

To list my Flames of War forces as they currently stand is as follows,

1 platoon of US Airborne (Fearless/veterans)

So 7 platoons to select from there, plus I have a platoon of US infantry  and anti aircraft not included in the lists.

Support platoons for the above (2) heavy machine guns (MG34?), and mortars, with command bases.

Again plenty to choose from there, 8 platoons and again I have other bits not relevant to these lists.


Only the last 2 models (British M10's) remain unfinished for the weekend. After that my focus will be on terrain and getting the 6 x 4 table set up permanently in the spare room so that I can come and go as I wish as I continue to learn the rules. I want the table to look as good as I can make it and have some big plans for this.

Looking ahead.
I am pleased to say that after several long months waiting for a decision my pension fund has approved my early retirement on grounds of ill health. This will make a big difference to me and the family and will give me back some independence after several years of battling a depressive illness that saw me give up my car because I had no interest or intention of driving the damn thing again! I'm keen to get out and about a bit again, and have my sights set on a trip to SELWG at Crystal Palace in October. The park is special to us as it's where we used to take the kids to ride their bikes on Sunday mornings (as you do), and my Aunt lives just a couple of streets away from the park. It will be her 90th Birthday next month so a visit is in order. Probably just a belated mid life crisis (I'm 58) , but I must admit I found myself looking at motorbikes again yesterday too!

'Laser Craft Art' a review of a 15mm scale MDF building for FoW.

With both of my Flames of War armies now about done, and with my painting desk clear for September, my thoughts now turn inevitably toward the building of terrain. I have spent a lot of time thinking about this recently as I try to think through just what I am looking for in this project as far as terrain goes. I have come down on the side of modular terrain rather than a more realistic 'model railway' type landscape, but I want to really work on the terrain pieces in order that everything ties together as much as possible. I'm keen to avoid those little fields that can hold a single tank model for example, and of course with no hexes to worry about I can really go to town on the terrain side so I'm going to enjoy myself with it.

So, first step for me was to establish a visual scale on the tabletop, Flames of War is described as a 'wysiwyg' game in the rules and line of sight is vital part of this. You will typically see FoW players crouching down at eye level  to the table each move to see what can be seen, I can't think of another game where you see this? If you can't see 'em, you can't shoot 'em! not directly at least.

You can see from the above that having say a small round hill half the height of a house is just not going to work as visual scale is important in the rules. So I'll begin by building up a small Normandy village and creating lots of bocage.

I'd looked at the ranges of MDF buildings for FoW and decided to go with Laser Craft Art as the roofs are etched with tile effect and the detail really stood out. I'm glad I did, as the product is of a very high standard indeed. I ordered a French village shop and it was posted with 24 hours, well packaged. I must say I was pretty impressed with the kit in flat form, high quality design and cutting. It took just a few minutes to push everything from the sheet and once I had it laid out I could not resist putting it together. PVA and a brush and the kit was put together in around 15 minutes. The result you see in the pics, that is the finished kit as it comes, for a price of £7.00 which compares well with resin buildings in this scale for example and is ideal for occupying with infantry, 2 bases per floor.

I will now be ordering an entire village worth of kits and they will be fully painted. These will set the visual scale for everything else, so large field patterns with bocage realistically tall, (earth bank topped with hedgerow that could conceal a Tiger!).

I would recommend these kits to anyone planning a FoW layout, easy to put together and designed for use with FoW bases. 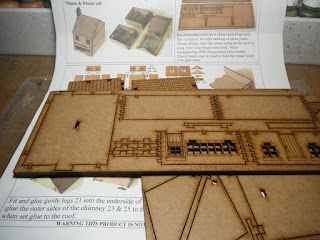 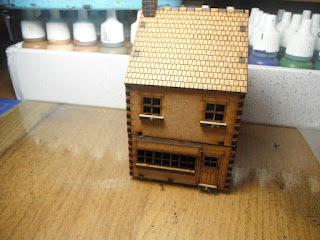 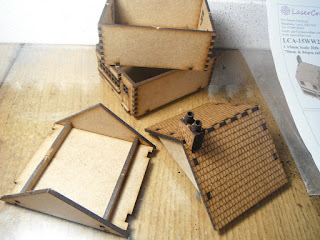 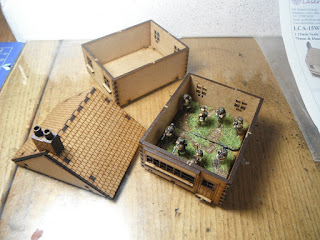