After a couple of days off from painting figures it was good to be able to sit down and paint another 10mm AWI unit this morning. I find I really miss it when I'm not painting something or other, I could possibly be slightly addicted to it! I enjoy the discipline of painting, I think it's good for me, and every single unit brings it's own reward and satisfaction once I sit back and look at the completed figures. As I paint at 'commercial' speed I do occasionally miss things so I always do a final check back over anything I paint. Looking at the unit painted below I note that I missed the epaulets on the officer with the musket for example - duly corrected.

This unit is the 4th regiment of Foot, the usual 24 figures. The Pendraken 10mm AWI range is in my opinion superior to the ECWrange, they are slightly larger, fuller figures and very well detailed. 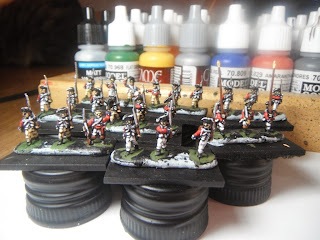 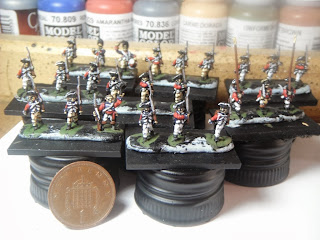 Commands & Colors Russian expansion - after months of putting off buying this expansion and then not being able to find it anywhere at reasonable cost (Amazon have a copy at £70.00!) I'm pleased to say I now have one on order from a UK supplier (and in stock!) at £38.00 plus just £4.00 postage. I'm really looking forward to the new scenarios as I have read so many good reports about them. I'm even looking forward to stickering the blocks.

2014.
This blog was originally intended as Napoleonic blog, and it just keeps on calling me back. With a very busy painting schedule planned for the months ahead for my customers I have no intention of starting any major projects for myself, it just seems pointless given how they generally end up, but I still feel the need to paint just a few figures for myself here and there. After a lot of thinking I'm going to paint individual French and Russian 15mm figures to use on the Russian C&C game, nothing more than that, just replacing the blocks with one figure per block, I simply cannot resist it! I have no time to create terrain any longer and no desire for large armies or battalions, but I really enjoy C&C N so much that this must be the next thing I do. Unlike the AWI version I will know when to stop, and I can bash these out in little time alongside my commission work. Something about moving figures about that board is irresistible to me. I'll be using Essex for this as they are the only figures I can see that will endure constant individual handling as playing pieces, I have never once known an Essex bayonet to break off for example, they are very durable.

Hope you are all enjoying the festive season and all the very best for the New Year.

Merry Christmas all, it's a pleasure being a part of this wonderfully diverse group of hobby bloggers ......long may it continue. 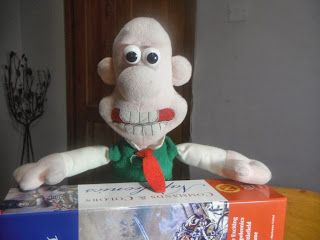 Wild night of high winds last night, and for the second time in a few weeks the high tide has been crashing against the Dymchurch sea wall. We lost five garden fence panels, smashed to bits, not much to moan about given the damage done to some around here last night. Our section of sea defenses was rebuilt only 3 years ago and raised by 1 metre, which I'm certain saved us from flood damage on both occasions.

Having been out this morning trying to patch up the fences until I can replace them after Christmas I decided to play a C&C scenario while my wife was busy cooking and preparing for the family Christmas invasion tomorrow. The scenario I chose was 'Crossing The Douro River' as it looked an interesting challenge for the Anglo Portuguese army. Here's the set up map and notes.

Historical Background
In the (Second) Battle of Oporto (or the Battle of the Douro) General Arthur Wellesley's British army took the city of Porto, defeating Marshal Nicolas Soult's French troops on May 12, 1809. After taking command of the British troops in Portugal on April 22, Wellesley (later named 1st Duke of Wellington) immediately advanced on Porto and made a surprise crossing of the Douro River. Soult retreated from the city after losing heavily.
The stage is set. The battle lines are drawn and you are in command. Can you change history?
Thank you to the author for sharing this scenario. HERE you can find the link to the original webpage.

Victory
5 Banners
Special Rules
The Raft Bridge on the right flank is worth a Victory Banner to the French if they can destroy it with Artillery Fire (3 hits as if Melee target on dice, use pennies as markers, then flip to a river tile). The Town of Oporto is worth two Victory Banners to the English. 1 LI and 1 LC start on the far side of the raft bridge.

The British attempted to cross the river and take the town of Oporto for Victory points, but also to bring up the elite troops from the left flank in order to bring the firepower of the Guards to bear upon the French right. The French were in a strong defensive position with troops firing from the cover of woods and town hexes and starting the game with artillery in range of British troops and attacks were quickly forced back with losses. In exchanges of musketry the British were at a disadvantage due to lack of cover and General Paget - leading infantry across the central bridge -was shot from his horse and killed, quickly followed by Sherbrooke leading the Guards forward! A lucky long range artillery shot removed the final block of a line unit just as I had pulled it back across the river to avoid giving away another VP, and with three VP's lost in quick succession the French took heart and moved forward pouring in volleys of devastating musketry. The British Guards were locked in square at least by  French light cavalry, but the damage in the centre was already done and the British were unable to make headway towards Oporto, falling back with losses. At five VP's to the French it was clear that the British attack had failed.

I will try this scenario again some time and try different tactics. The raft bridge on the British right could possibly have been better used to get troops across the River more quickly in an attempt to flank the French left before attacking into the centre.

A convincing victory for Soult - the game ended 5/2.

Now I know tanks are not everyones cup of tea but....

I must admit they are rather lovely. I'm certainly no tank expert, indeed I know very little about them beyond general military interest over the years, but I'm looking for a sort of generic battle tank to replace the plastic one's in Memoir 44. I must say that there is little wrong in the models supplied in box game, they are surprisingly well detailed tanks in 10mm scale. But I want to bring this all down to one scale - 15mm, and to be able to play on the game board  if I wish to. Bearing in mind of course that this could all go pear shaped at any time I have finally come to the conclusion that board games are the way to go for me. That said I know I will always enjoy handling model soldiers so my New Year plan is to simply enjoy replacing the blocks for various C&C games with single figures, I may never use them, who knows, but I'd like to be able to display them. I want to do C&C Napoleonics and Ancients following Memoir 44.

Hardys Ale - the official opening.
I realised recently that I had not mentioned what happened when I opened the 30 year old Hardy Ale some time back. I had paper and pen for tasting notes as requested by Steve the Wargamer, carefully removed the seal and the cap and prepared to enjoy the moment ..... I poured it carefully and slowly and it filled the entire kitchen with the most foul smell I have ever endured! Even my teenage daughter upstairs in her room shouted down " Dad, what is that stink?" I poured it down the sink and fell about laughing, it took ages to wear off. 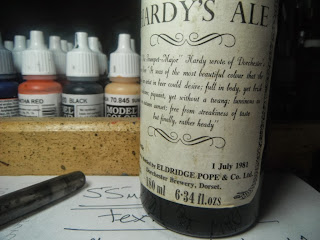 Here's my little tank (with fond memories of Allo Allo), for a first timer it's not too bad? I think the Magic wash really worked as a quick way of weathering it down a bit. Undercoated black by hand and then it took about 1 hour to complete. I have 7 more to do through Jan!

15mm Sherman Tank from peter Pig. £7.00. Much cheaper to buy plastic, but I like the heft of this model. I'll probably add a base. 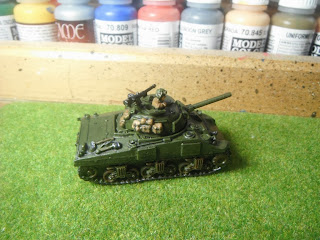 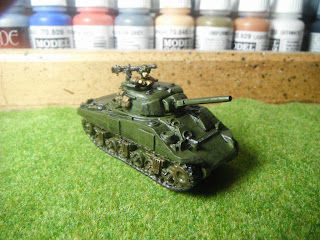 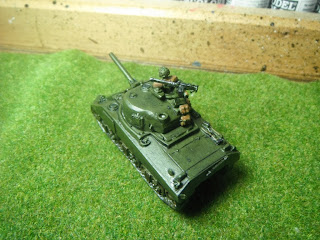 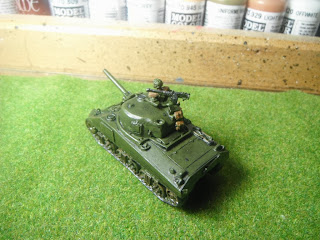 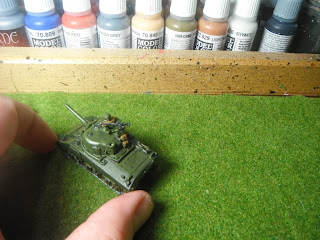 Just in time for Christmas!

I'm pleased to report the timely arrival of the first of my planned 15mm tanks for Memoir 44, I was hoping that they would be here so I can work on them over Christmas. Two Shermans and a Panther as a tester so I could see what they are like, and I have to say I'm well impressed with these little models. They are suitably hefty and the quality is everything I have come to expect from Peter Pig ..... plenty of Oink! They should paint up really well and I have been reading up how to paint model tanks. 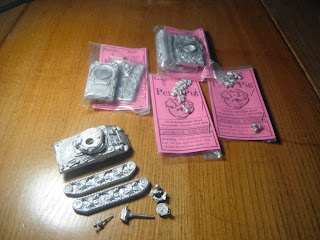 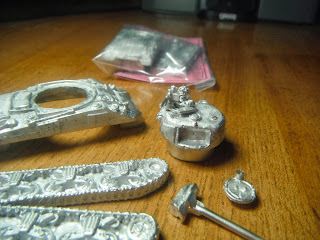 Also I managed to get a bit more work on the hull of the 74gun, the decking woodwork will be inked down a shade. I'm taking my time with this one, next up the masts and sail sets and drilling out the 0.5 mm holes that the cotton rigging will pass through later. 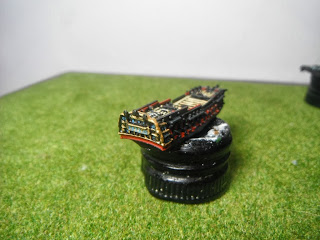 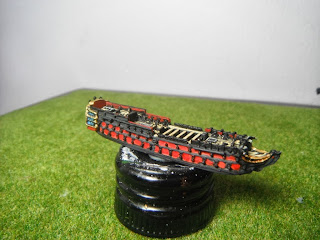 On the commission front, as the year draws to a close I'm happy to say I have some some interesting projects for the New Year, more 20mm from Old John, more 10mm AWI's, more 20mm ECW's, 6mm ACW's and even some Napoleonic Hinton Hunts that I'm rather excited about.

Currently I'm working through 5 foot units for Tony's ECW collection which includes Covenanter Scots and the first was finished this morning with the addition of some extra highlights to lift the Hodden Grey look. Again superb 20mm castings full of character. 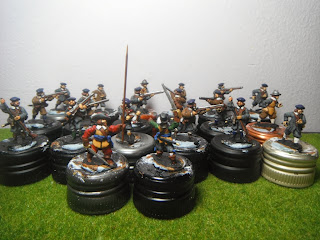 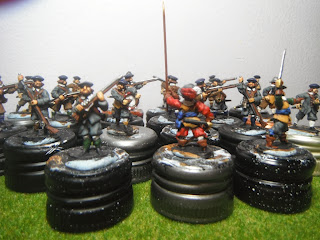 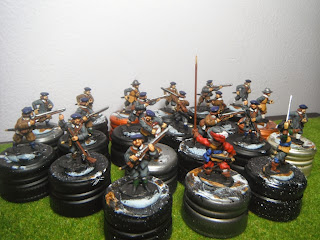 The 10mm British AWI army - for the same customer that I painted the large American army for earlier this year - is coming along nicely now that I have settled into a comfortable painting routine with them. This is battalion/regt number 7 the 5th Foot. Usual 24 figure units which will look good once based up. 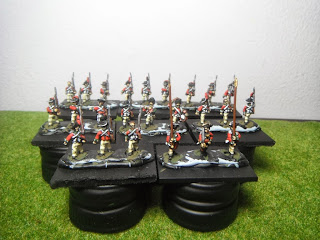 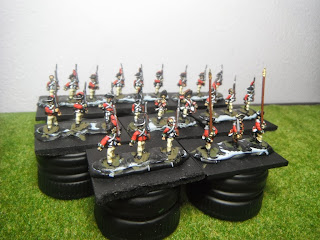 I'm sure I'll be posting pics of the first tank very shortly.