Wishing all fellow bloggers and followers a Merry Christmas. Our first Christmas in Spain has come round already and the sun continues to shine with temperatures pushing 20 degrees. There is little sign of the blatant commercialism of the UK High Streets, it's quite refreshing. Yesterday we drove down to Benissia near Calpe to visit the International Supermarket that stocks UK imported foods which it sells at very inflated prices. On our list were mince pies, a Christmas pudding, brandy butter and a joint of British beef, things we have not been able to find up in Gandia, and it was a real culture shock to walk in and find the place full of Brits! We became aware of just how 'Spanish' our diet has become as we now tend to eat what we find in the local Supermercado in Villalonga, fresh fish, meat fruit and vegetables, none of the processed food of UK supermarkets, no rows of crisps and snacks or sweets. We were actually pleased to get out of there and get back to Villalonga and our Spanish neighbours.

We received a lovely big bag of freshly picked oranges from one of our neighbours as a seasonal gift, the economy of this area of Valencia is very much built upon oranges and the groves are still being intensively picked with seemingly no end to the crop, the factories are in full swing with lorry loads of the fruit being shipped out daily to all over Europe. Today Shaz is going to make some of her lemon cheesecakes as gifts, such is our new life in Spain. 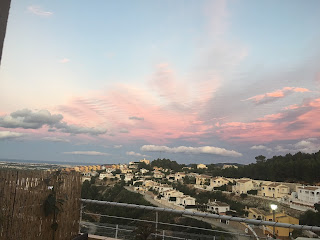 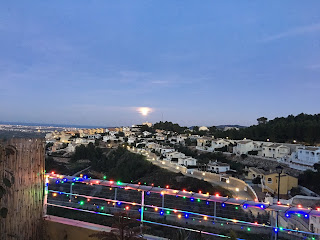 Hobby plans for 2019.
I will continue to expand the figures per block C&C project, I'd like to do the Prussians next. I decided to remove the figures from the flocked bases, they just looked to messy to me and I wanted to return to the cleaner single bases with as much flock removed as I could and repainted. I like the individually based figures and the Blue Moons are robust enough - and heavily varnished - so that I can just scoop them up by the handful! I have now decided to keep all line infantry at 8 figures for more visual impact on the C&C board. This weeks output has been 8 British Grenadiers/Guards with a sergeant to mark them as elites, 4 French 4th Hussars and another 4 French voltiguers. 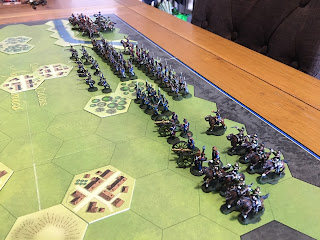 It's been a pleasure following all of your blogs this year and I look forward to reading more next year, it really is a great source of inspiration and helps keep me painting.

A slight basing cock up, but recovered!

This week I decided to take the plunge and multi base my 15mm figures for use on the C&C board. having been unable to source magnetic sheet or tape here I went with simple card bases, all cut by hand to a standard 55mm x 40mm with a 10mm black strip painted at the rear to take a printed label. Once I had lightly tacked down 8 line infantry, 4 skirmish infantry and 4 cavalry per base I was quite pleased with things. I say lightly glued down because I might still at some future point go with the magnetic option so did not want anything too permanent before I tried it out in a game. The artillery was based on the narrow front edge with 3 crew standing behind the gun. So far so good.

It had taken a few hours work to get to this stage, I then decided to go one step further and apply flock with the intention of painting the entire base green once fully dry. However, after another couple of hours work doing this and having completed all the bases both French and British I realised that it was a mistake! The flock looked a mess and I knew I should have simply applied a thick coat of green paint, an attempt to paint the flock resulted in a disaster so I left everything to dry overnight and felt pretty disappointed with myself. Returning next day I could see only one way of rescuing things and so spent a couple more hours laboriously removing as much of the flock as I could with a stiff old brush, the intention being now to apply a thick coat of green paint to match the shade of the C&C board. The label at rear will have the base info at a glance, based on the C&C unit stats as shown below.

Back at recovery central I placed the French bases on the C&C board for a few shots to see how things looked. They are a tight fit but will do fine for games on the board and I still intend to make a bigger purpose built board for games that can feature conventional terrain items, to which end I have been painting more of the Battlescale 10mm buildings. I'm getting closer now to what I was looking for when I started this project, and remain inspired by those bloggers working with grids and smaller scale tables and especially by Norm and his fine 'Pinboard' table (link).

Tomorrow I'm off to Leroy Merlin to find a suitably coloured acrylic match pot for all the bases and a game will follow. 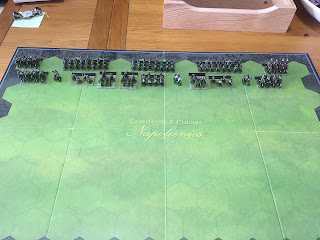 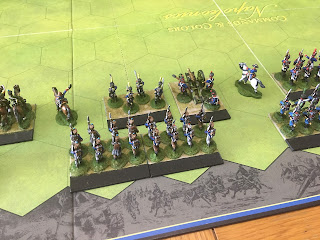 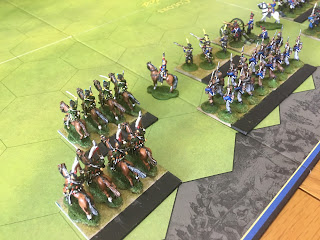 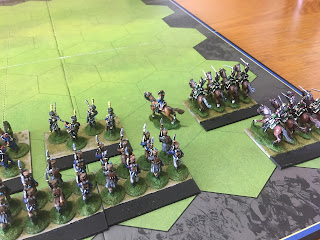 So many options, and so many pictures!

Right then, it's Sunday morning, another fine one in Spain, I have walked the dog and set up my Instagram account ready to follow Strykers Plancenoit battle due to begin around 11am or midday here. This is my first foray into such technology, I have to say there are some very fine images of the HH figures on the page, I like the idea a lot, good fun.

The 15mm's have been reorganised as shown below. Basically the foot units are all now 8 figures and all cavalry units 4 figures which just about fits the C&C hexes. They will sit on then sabot bases with a small label on the rear showing the basic 'block' strength and unit type. For example British line are 4 blocks, light infantry are 5 and rifles are 3 blocks. I know all these types instinctively now, and the number of dice each types throws in standing or moving fire combat and melee including additions and subtractions of combat dice, but a small label won't hurt as a visual reminder of type. The larger standardised unit sizes simply gives a cleaner look to my game and a little more visual appeal hopefully.

Having said the above the individual basing allows for several options, the first being games played on the C&C board as block per figure games, the second being games played on a larger grid using my tweaked rules and proper model scenery, while the third is to combine the smaller groups into fewer larger units of 16 to 20 figures including command figures for a conventional 'grid free' experience. I'm currently on the look out for some kind of magnetic basing medium that will allow me to switch between the options, I'm pleased how this has worked itself out, I still have a draw full of Blue Moon's to paint so this project has plenty of life in it yet. This week I will paint another 8 Highlanders plus 4 command figures before painting French command figures and then turn my attention to doubling up the French cavalry.

This also reduces the overall number of 'units' in the game, making solo play more manageable. I'll be keeping my activation draw/roll system but might trial using an average dice for the actual activation roll. Possibly also infantry should be able to use double activations to advance a bit faster. 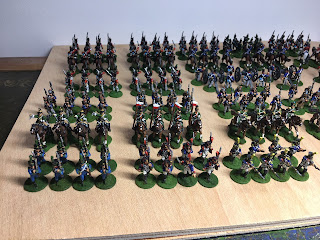 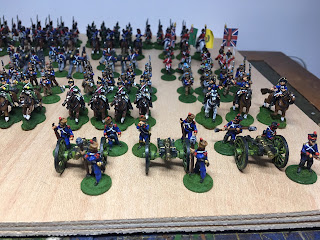 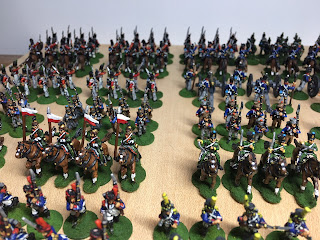 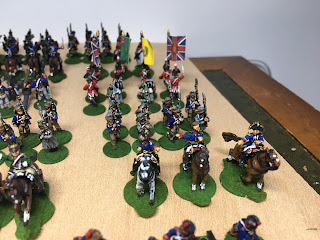 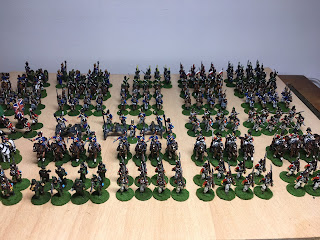 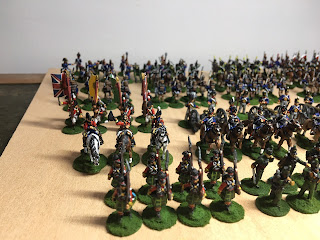 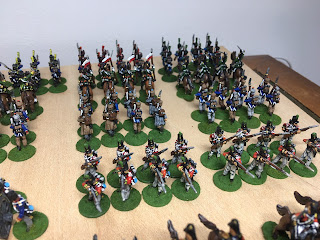 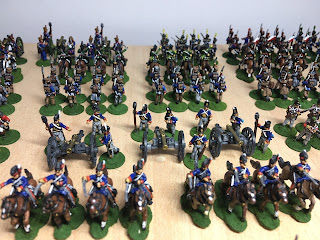 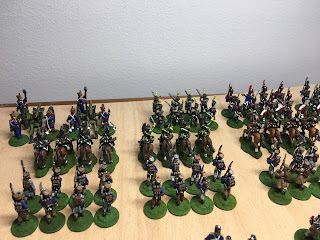 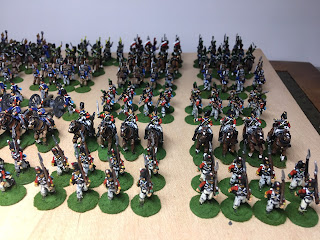 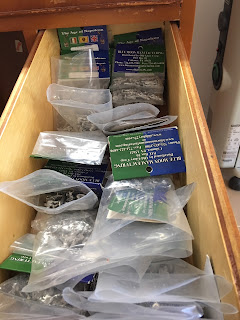 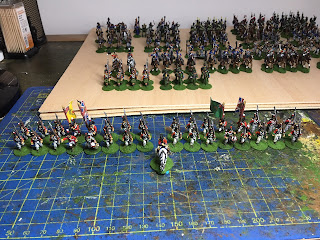 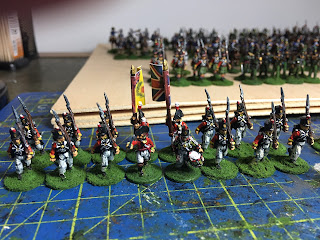 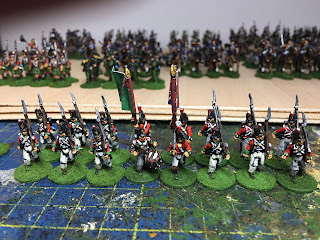 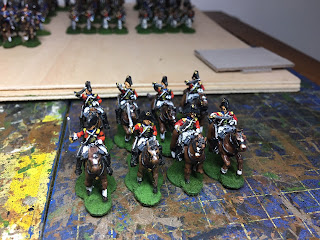 I did manage to get through quite a few activation draws on the game from the previous post, the random draw worked well, the British dice came up first two draws so the light infantry and rifles managed to push on and occupy two thirds of the town before the French had a chance to react. This was followed by two French dice which allowed the French Grenadiers to occupy the other town hex, setting up a battle to take overall control. Cavalry were moved up in support as the bulk of the infantry plodded forward (this is one thing I need to address as they need to able to make some sort of quick march move to avoid getting left behind). Artillery opened fire on both sides and the British lights, with commander attached and rolling the additional dice, forced the French Grenadiers to retreat from the town hex giving the British complete control of the three hexes. But the French were now in a position to counterattack.

At this point there was a slight interruption to play. I was expecting my wife back home, I got a call to open the electronic gate and peered over the terrace, in came a 9 seater hire car and out jumped wife, two of our daughters and three Grandaughters...... "surprise Grandad". So lovely to see them all of course, but I had to rush inside and get the figures and game board out of the reach of the two little ones so quickly packed everything away. No problem though, that has given me the appetite to continue this project.

Taking a step back and looking at the pics below I know that I want to create a new custom made board for this game, based on a 3 x 4 lightweight framed board that can utilise some basic scenic items such as buildings, hills, roads and streams etc. The purpose of the new set up will be to enable me to play through the One Hour Wargame scenarios as said before.

So, with this in mind I have decided that for more visual impact I need larger units, I'll start by doubling everything up, so 8 figures for infantry etc. If you recall I said I wan't planning full size units, but as I did have command packs, and feeling in the mood to paint some Peninsular officers in those lovely bicornes I knocked up the eight figures you see below, and still feeling in the mood for something a bit colourful I followed up with eight Legere figures. I can really punch out these 15mm's now, that was 16 infantry in two days and I also managed to paint a couple of buildings, 3 more British Dragoons and another British commander over the next couple of days.  Sitting on washers awaiting painting are currently more Highlanders, more French Grenadiers and Legere.

Talk about going full circle! We shall see where this takes us, but at the moment I can't stop churning out 15mm figures.