An alternative to static grass!

As I have now decided that my future direction is the hybrid board game/miniatures combination I wanted to find an alternative to using static grass on my bases .Of course there was a time when you barely ever saw static grass on bases, but I could not remember for the life of me how we used to do it! A bit of experimentation produced this simple mix that looks pretty good to my eyes and means the end of loose of grass left on the boards after a game. Above all I think it works better with the flat playing surface. I have made it two or three times now and it comes out the same shade, so I thought I had better record it.

The mix is simply: 1 part sand, 1 part PVA and 1 part Olive Green. It dries out leaving subtle highlights as you can see. 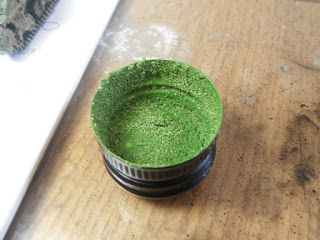 I updated my 'memoir '44 'blog yesterday and was looking through the tiles contained in the 'Terrain' expansion set. I noticed one stack was of desert terrain, and remembered that I do have the 13 x 17 hex 'Breakthrough' board in desert sand so I unfolded it for the first time and laid a few of a the tiles. Immediately my thoughts turned to the wonderful Peter Pig 'Colonial' range 'Sudan 1885' and another opportunity to do something fresh and new, as I have never played this period before. Like my Memoir project this offers a chance to paint small forces and really enjoy working on them. I'm sure it won't be hard to find C&C N 'variant' rules for this period, as lets face it, there's not much that has not been covered. I'll post this project up here as it progresses. 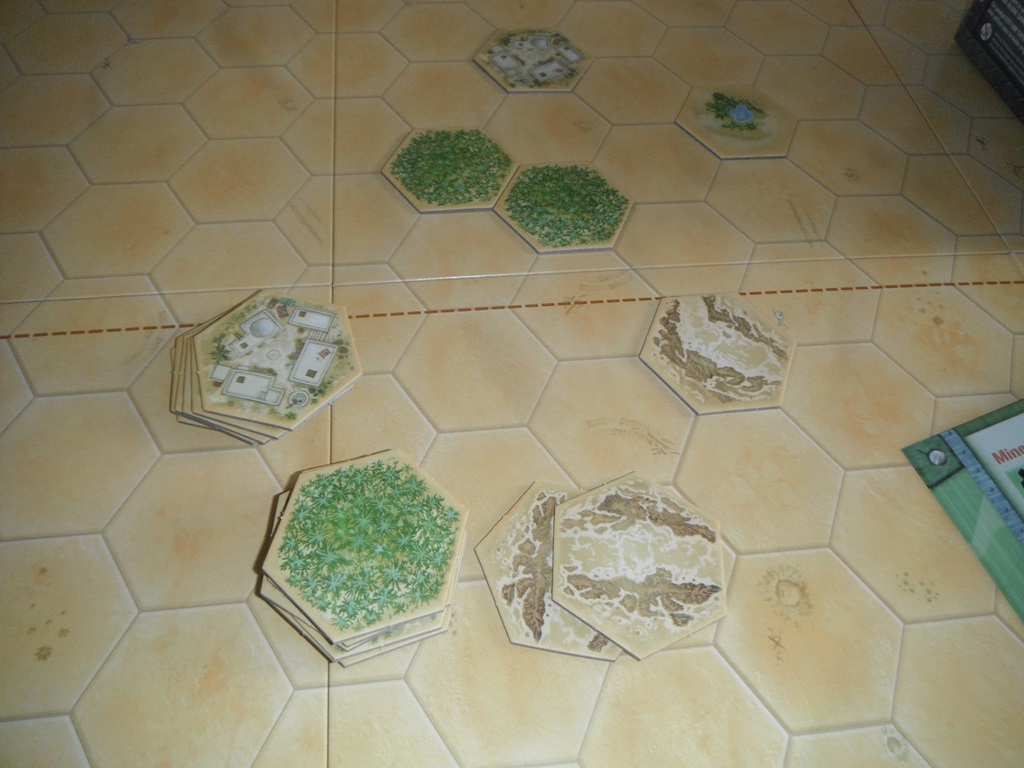 Aside from this my next post will feature the 30th Regiment of Foot (led by a wonderful Hinton Hunt officer of the Guards in bearskin, who has been unable to rejoin his regiment due to staying late at the ball). After that I have another two Spanish battalions for Tony to paint, I'm taking my time, and obviously domestic issues are taking toll of spare time, but I like to keep painting daily if I can.

Well, the Waterloo anniversary has come and gone, great to see it well covered by the media. Funny enough I have found my own Napoleonic interest has waned somewhat over recent months as I have gradually become drawn into the late WW2 period. I'm pleased really as it has revived my interest in playing wargames again, and the pleasure derived from painting figures and vehicles of this period is not dependent upon painting vast numbers but rather individual pieces. This suits me well for the time being.

As my 'Therapy' blog has taken so many twists and turns along the way ( it actually started with 28mm Perry Austrians and must have covered just about everything since!), I have decided to start a dedicated 'Memoir '44' blog. It can be found in the links bar at top, so if you are also into Memoir you can follow along this separate project blog.

I must thank those who sent me messages of support during recent domestic events, very much appreciated. Mum in Law is stable and being well cared for, and family life must go on. I'm still working on the 30th Foot for Ian, taking my time, as and when I can. They are vintage Hinton Hunt castings and it makes a real change to be painting some redcoats again! I hope to have them finished and on the blog next week.

Meantime here are some replacement German infantry, all of the plastic 'Battlefront' miniatures have now been replaced with Peter Pig metals as they are so much more robust. Note that I'm also'static grass' free for the first time in many years as the bases look better this way on a gameboard. 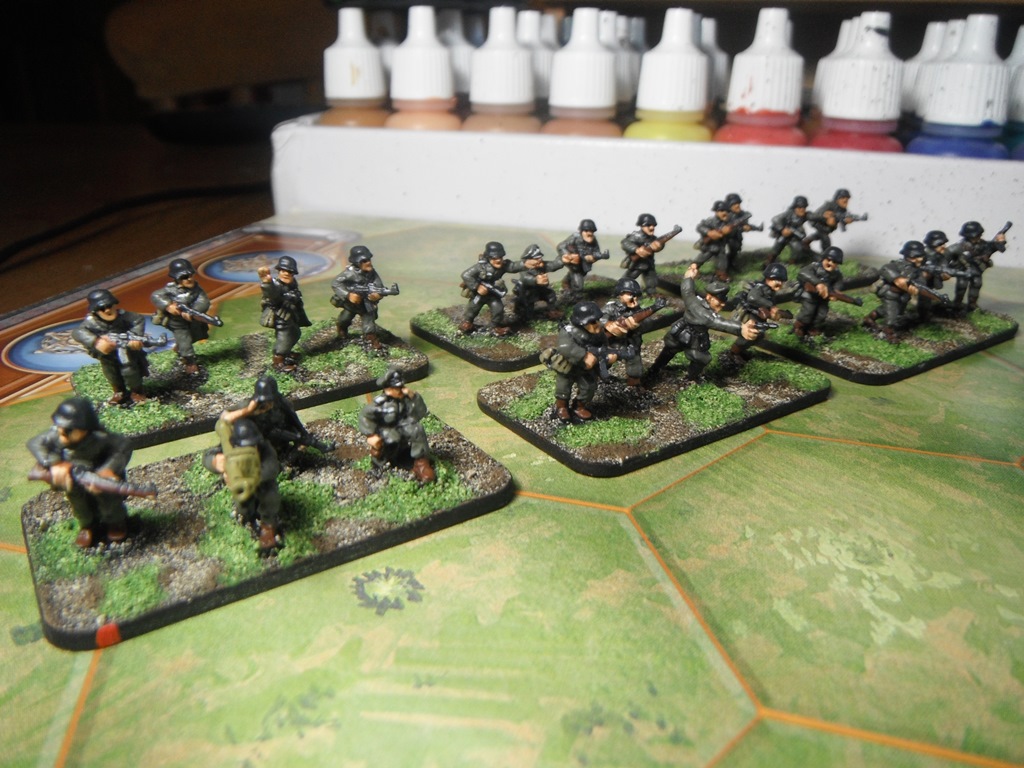 Getting back on track.

It's been a busy few weeks on the domestic front, mother in law slowly recovering from her fall and eldest daughter back home after a spell in hospital with gall bladder infection. Of course we still have to deal as a family with mum in laws terminal illness, but she's remarkably upbeat as she approaches her 80th birthday. We have a special treat lined up for her, a couple of nights at the beautiful Port Lympne Safari Park, staying in one of the very popular 'Safari Lodges, that has magnificent views across the Romney Marsh towards Dymchurch. It's set in rolling hillside and is only about twenty minutes drive away, so no long journey involved for her. We're all booked in together, should be fun, all three of our daughters grew up with regular days out at Port Lympne so will be nice to spend a bit of time up there again.

As far as painting time goes I have managed to get a bit done here and there. I managed to complete the final Prussian unit for Vintage Waterloo, I'm pleased with them, they are of course for Roy. In addition I have started a 24 figure British battalion for Ian and I'm finding painting redcoats most enjoyable again after so many 'blue' units, both French and Prussian. 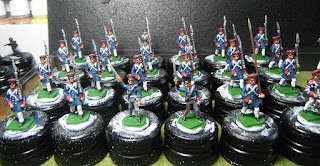 A new direction?
One thing I have been doing a lot of recently is thinking, about many things, future plans, is it time to move house etc, and this has included my hobby. I said a few months back that I'm no longer a wargamer, but it's very hard to shake off  something that does bring so much pleasure. I know that I'm done with painting large armies for myself again but having recently discovered WW2 wargaming I'm feeling a real pull towards 'Bolt Action'. I may also be becoming a 'tank geek' having watched and listened to hours of YouTube tank related videos whilst painting I have a new found fascination and respect for those guys who crewed the tanks!

Currently my WW2 stuff is 15mm for modified Memoir44, but Bolt Action uses 28mm figures (and tanks!) to play skirmish level actions with small forces. The rules do not seem any more complex than Flames of war to play but obviously at a lower level command level ( so you can target an individual soldier or officer figure). The simple activation system of placing all the unit dice into a bag and drawing them one at a time works so well, so initiative can suddenly swing about between sides creating real tension.

If you are into WW2 and have not seen a Bolt Action demo game this video is well worth a watch, the figures and terrain are stunning , and not a hex in sight!