A quick addendum to my last post today - I was touched by the description on Mr Kinch's blog of the Charity Walk. I thought it would be a good idea to do a little something myself. It's a very good cause. http://www.mycharity.ie/event/kathryncasey/

So, here we see a 16 figure unit of Front Rank Austrian Grenzers, plus 9 Austrian command figures by Front Rank -  these are a prefect fit for the Victrix plastics where additional command figures might be required. I also have a number of complete sprues from the Victrix box (line infantry in shakos). I will post these figures to the person who makes a donation to the charity. Twenty euros would be great, but anything would be appreciated and I'll cover the postage.

Thanks for looking, all you have to do is let me know so I can hold them for you, make your donation (I don't need to know what it is) and I'll get them off to you. 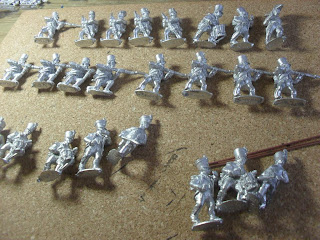 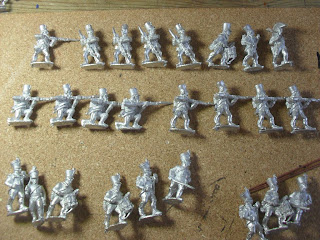 Thanks to a couple of evenings spent reading through Konrad Kinch's most excellent 'Peninsular Battles' series in which he re-fights all of the Commands & Colors battle scenarios (save the 2 Hundred Days Campaign scenarios), I have regained my enthusiasm for wargames. Something about reading those splendidly written accounts I find very inspiring. Last night I re-read the 1st position at Rolica scenario, which is the only one I have played solo so far. I have also been having a crack at this scenario again using Vassal for C&CN. I'm gradually getting used to this system and I hope to shortly be sufficiently confident to take on Mr Kinch without making a complete hash of things! I plan to set up the Rolica scenario again shortly for another run through, this time taking more time to develop the British central attack against the ridge and the two hills on the flanks of the French position, the capture of which are rewarded with Victory points.

Meantime I'm working back though my Napoleonic bases and highlighting the brown patches slightly, which I think greatly improves the overall appearance.

My painting service has got off to a very good start, in fact it looks like I may be fully booked for several months ahead now as I work on a large (non Napoleonic) project. I'm currently working through some AB Figures Napoleonic Imperial Guard figures, infantry, cavalry and artillery. These Chassuers a Cheval of the Guard are now finished, the picture shows them at about 90% painted stage. Wonderful figures these AB's, but I still love my 6mm forces! 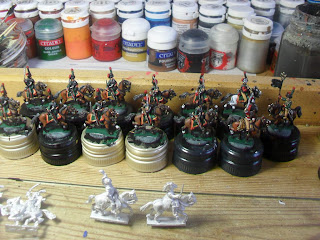 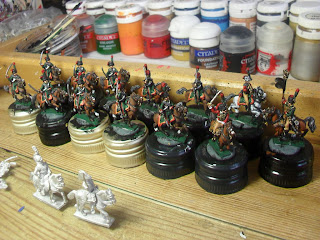 I must confess to having slightly lost my enthusiasm for gaming at the moment. I'm not sure why but I seem to have no interest in moving figures around the table currently. This happens to me from time to time, but unlike previously my enthusiasm for painting remains high. I think it's a lot to do with being able to suspend disbelief or something, being able to identify with those miniatures in recreating a historical battle.

I decided to let this blog stand as it is, looking back its got some nice images and information on 6mm Napoleonics which might hopefully inspire others just as I was inspired by a few favourite blogs. Meantime I'm busy with my new painting service, got a few weeks work ahead  on some 6mm figures and some 18mm AB figures so I'm happy. I'm also filling in by painting some of the bits and pieces I have left here in 28mm, although I don't accept commissions in this scale. This French gun and crew (pre 1812 line artillery) are going up on eBay today on a 3 day auction, won't go for much but at least I should get my money back for the castings.

I hope to paint another 6mm base for the Napoleonic collection over the weekend. 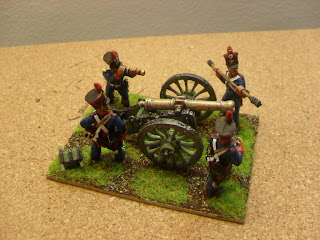 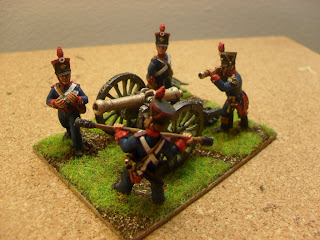 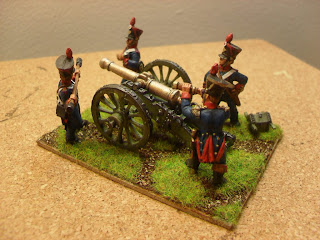 Cossacks and other news!

So could this be the start of something Russian? Possibly in time yes, but I found a bag of cossacks whilst rummaging through my Baccus figures - must have found their way in to one of my orders by mistake possibly - and decided to give them a quick paint up to see how more 'irregular' basing would look. I really like the overall effect, same number of figures as all my Peninsular cavalry -18, but in three loose ranks.

Other news.
I'm now about ready to offer my painting services, as discussed here recently. I would like to specialise in the smaller scales of 6mm and 15/18mm, plus 20mm metals. The reason for this is because I think thats what I'm best at! I'm going to spend the weekend ahead getting some info put up in a dedicated page with prices etc. Although I'm in a position to dedicate myself full time to painting I'll only be accepting one or two commission jobs at a time so as not to overwhelm myself as I did last year. In addition I'll be painting up popular 15mm units for auction on ebay, most likely in the Napoleonic, AWI and ancients periods to begin with. More shortly. 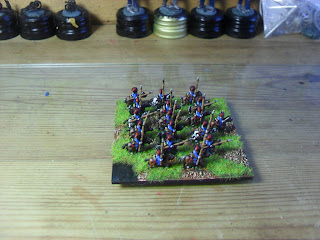 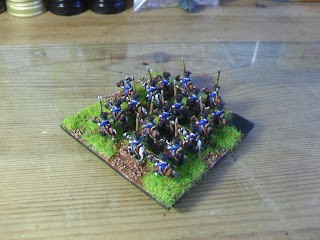 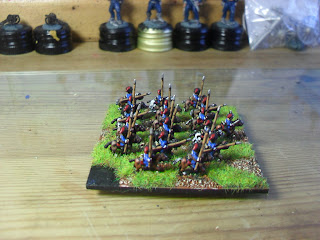