Thank you for all of the messages wishing us good luck on our move, they are much appreciated. We are booked on flights to Alicante on the 14th April with an initial 6 week rental on a lovely villa as we view as many properties as possible that we have bookmarked. We are looking to buy a 5 or 6 bedroom villa with the obligatory pool and nice views as we have a large family and my wife is interested in offering B&B accommodation ..... her passion is cooking so guests would be well fed!

Whilst still here in the Uk I have been spending a lot of time reflecting on what to do next with my hobby time. I'm currently in a hotel overlooking the English Channel, it's cold and wet but the sailing club is out as are the fishermen, hardy souls. From Saturday onwards we have booked a lovely little cottage on the Kent/Sussex borders, dog friendly so I'm looking forward to getting out for some good walks. I'll be taking Commands & Colors with me, so plan a couple of evenings playing Peninsular scenarios from the base game, if necessary in front of the log burner!

I still feel the need to paint wargame figures and my thoughts have turned increasingly to the Peninsular War, I plan to visit as many battlefields as I can once settled. So I now have on order a goodly number of Blue Moon 15mm Napoleonics from Andy at Old Glory, they will be delivered to my Daughters house next week and will be driven out to Spain by my Son in Law on the 13th April along with my paint box and C&C sets. He is also taking Poppy the dog and Sheldon the cat, both of whom now have pet passports to travel.

And once there, I plan to work my way through the 'Sharpe' series again by way of inspiration!

On Monday 26th March we complete on our house sale and a new adventure awaits as we move to Spain. I decided that I want to make a completely fresh start hobby wise too and so it was a pleasure to meet Rob this morning who has taken into his care my Hinchliffe ECW collection. After a bit of indecision - although I knew in my heart that I wanted to pass them on - it was with not a single regret that I saw them go to a new home where they will be well used and enjoyed. The fact that 'Wellington Man' who I know to be a big fan of the Hinchliffes may be visiting Rob on his travels and seeing them 'in the flesh' as it were was a bonus.

I wanted to make a complete break and so I am really pleased that I will be passing on the two fully painted sets of 'Travel Battle' to Bob Cordery, who will I'm sure get much pleasure from them in conjunction with his 'Portable Wargames' rules. Bob and I lived only a few minutes apart for more than a decade before we moved down to the Kent coast, yet we never met. I admire his commitment to the hobby.

I will be taking Commands & Colors Napoleonics and all the expansions that I have with me, funny enough speaking to Rob this morning I realised that the only expansion I don't have is the Spanish one, something of an irony considering where I am going, but I'll put that right and grab a copy before we leave for Spain mid April. I may also get the base game C&C ancients too. I do intend to expand my board game collection, but I'm sure that I'll paint something again once settled!

I'm sure that you will see something new appearing on this blog in due course, although it may be a couple of months before this happens.

All the best for now,

I glued up the first section of 10 infantry from the Perry 'Desert Rat' set, they were far quicker and easier to put together than the Napoleonics I did a few years back, possibly because I have had a lot of practice with plastic multi part figures, but also there are a hell of a lot less separate parts to these latter figures. I then set about deciding how to approach painting them. After some thought I decided to stick with my trusty black base coat and to work with a fairly dry brush to build up the colours. I started with Vallejo British Uniform, highlighted with uniform + Off White. Still not happy with the resultant shade I went back to Flat Earth with about 20% added Off White and this produced a better shade to highlight with, again still keeping the brush fairly dry, not loaded with paint. At this point I felt I was close to the tones as illustrated on the box artwork, if a little patchy here and there. For the flesh I went a shade darker than usual Vallejo Beige Brown as the base and Sunny Flesh Tone as the highlight. At this stage I still did not feel happy 100%, the flesh needed a more suntanned look.  Vallejo Sepia Wash was brushed over the flesh - not forgetting the knees - and this produced a look that I was happy with. I also brushed a watered down wash of the same over equipment and uniform folds etc. They need varnishing, but on the whole I think they give a reasonable representation of the Desert Rats uniforms.

They will be based for Bolt Action with sand bases and represent a British Infantry Section consisting of a Sergeant with machine gun, 8 riflemen, one of whom supports the Bren Gunner with extra ammunition and the Bren Gunner himself. The Perry box contains 3 such sections together with mortar and anti tank rifle support weapons plus command figures/radio operator to complete a Platoon, as such it's very well thought out. Additional metal figures are available from Perry of course, including a fine Vickers medium machine gun section. 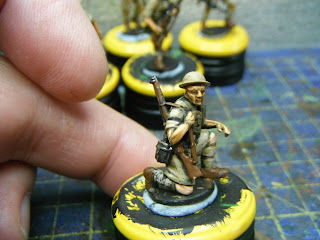 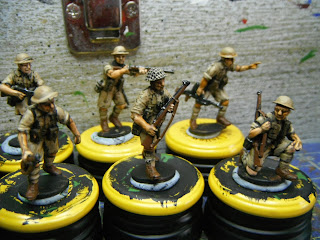 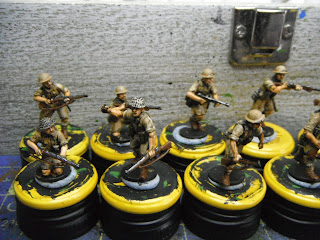 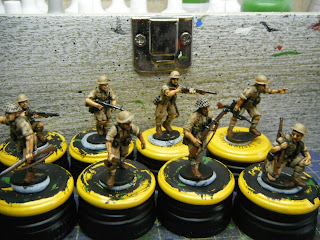 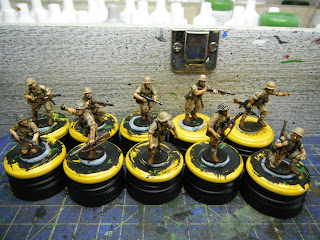 Bits and Bobs and a question.
With completion date set for 26th March we have been going through lots of old boxes from the garage and loft and found a few interesting things including my late Father in Laws small collection of pen/fruit knives, lots of old gold and silver jewellery, a Box Brownie camera and other things. Most of this has been sat in boxes since we moved into this house 14 years ago and it's been fun rediscovering these oddities.

A bit of research tells me that some of the fruit knives have quite an age, my favourite by far is this lovely little one with elegantly engraved mother of pearl handle and hallmarked silver ends and blade, the hallmark would appear to be for 1888 which I find remarkable, I'm keeping this one for myself! What I am most curious about is the object shown below, again it's hallmarked silver with a steel inset that opens and closes and appears to be designed as some kind of cutter? Too small for a cigar cutter, I would really be interested to know what it is? If any fellow bloggers have any ideas on the matter please share them with me. 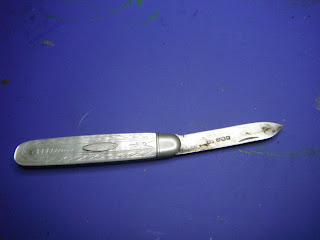 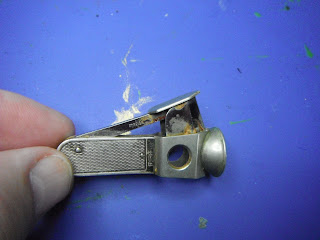 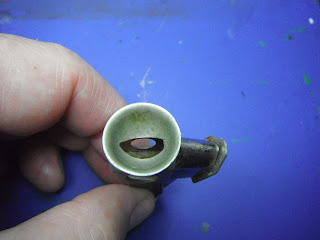 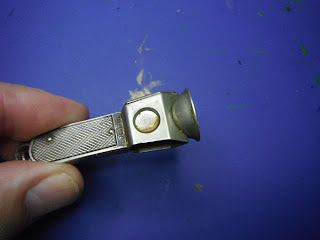 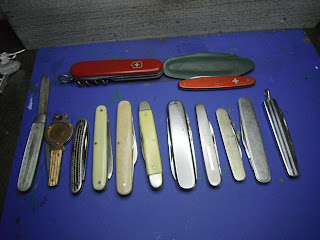