French cavalry on the DBN bases.

Not a great deal of painting going on this week as the family are over and with two toddlers and a nine year old causing mayhem there's not much quiet time, but we would not have it any other way of course. The house looks like a bombsite! They have all gone out for a couple of hours today so I did a quick bit of drybrushing of the French cavalry bases, everything is now on 120mm frontage bases suitable for DBN or indeed C&C should I choose.

What I didn't know a week ago -

As mentioned previously I have been looking into the feasibility of creating some Royal Horse Artillery crews for my 40mm collection over the Summer. There is no doubt that there are many great figure sculptors out there producing small independent ranges, we are all spoilt for chose these days. It is not actually that expensive to have a master figure sculpted and moulds made, with Griffin being top of the list for the mould making/castings process. However, when looking for something like the RHA crews in 40mm scale, it is obvious that there is never going to be any great commercial demand for such figures. I am currently exploring the production of some bespoke figures with a fellow 40mm collector, for my part I am looking for the following:

Being from back in the days of metal dollies and solder I was unaware of just how far the technology of 3D resin printing has come, and recent research has really sparked my imagination, and so prompted by my partner in this little venture we are now exploring the possibility of going down the digital rout to create our gun crews. Here's what I didn't know a week ago!

Masters can now be digitally created on a computer, and the resulting SDL (?) file can be used to print out the master in resin on a 3D printer that can then be used to make a mould. Having seen a few examples of just what can be achieved I have to say that I am very impressed with the technology, and a test sample of a RHA officer has been commissioned to see how it turns out. More will follow as things progress.

Digital Sculpts Sweden. This is the guy who is doing the test RHA officer.

Graham Cummings has been experimenting with his 3D printer on his excellent Scotia Albion blog, well worth checking out these links if you are interested in the technology.

Meantime I'm painting a battalion of Les Higgins French infantry for 'Tony, very nice little castings they are too, and working on finishing off basing the 40mm cavalry in 4's on 120mm frontage for DBA/ C&C. The results are slightly chunky looking, but these are weighty figures and need a thick base in order to pick them up safely. Pictures will follow hopefully tomorrow.

I have had a good sort out and tidy up of my painting desk over the last few days, the drawers were becoming rather cluttered and untidy and I find the need for order with an 'everything in it's place' mentality. One thing I have done is to go through my Vallejo paints and try to arrange them in colour batches. I always keep my paints in the same place in my box, so I know where the main shades are without needing to go through them, although the greys were becoming a bit of an issue as I have so many. I glued in a few dividers and replaced the paints upside down so at a glance I can see every shade, this also has the advantage of keeping the thicker pigment towards the top of each bottle, this is working really well and the neatness is also very appealing. I also have an overflow draw of around another 50 pots, replacements/spares/rarely used colours, kept correct way up. I have a draw for my modelling tools, drills, wire, cutters, files etc and another draw for my scenic/basing materials. All very good.

I had a few mounted officers left in my 'Sash & sabre' draw, plus some foot figures. all were painted and it seemed a shame not to use them in some way, so I made the four command bases you see below from them. These are aside from the main circular command bases already in the collection, and will prove useful and more practical for smaller games. I'm not sure what make the British officer with shako on sword is, he came from Andy and is a lovely character, I think he's a bit of a conversion, I do love that large head and that face. All got a bit of a touch up here and there.

So that's every 40mm figure used now, save for the few you see behind that I'm finishing off. Time to get an order in but I'm just waiting for a pension transfer to come through then it's more Sash & Sabres, the Perry British Light infantry and some of those wonderful buildings. 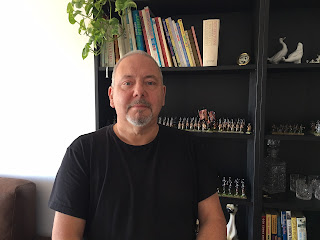 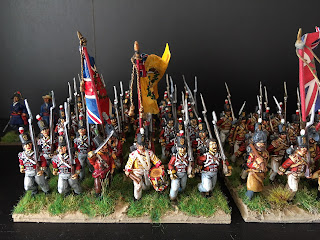 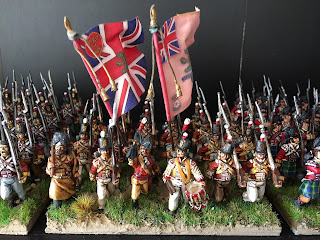