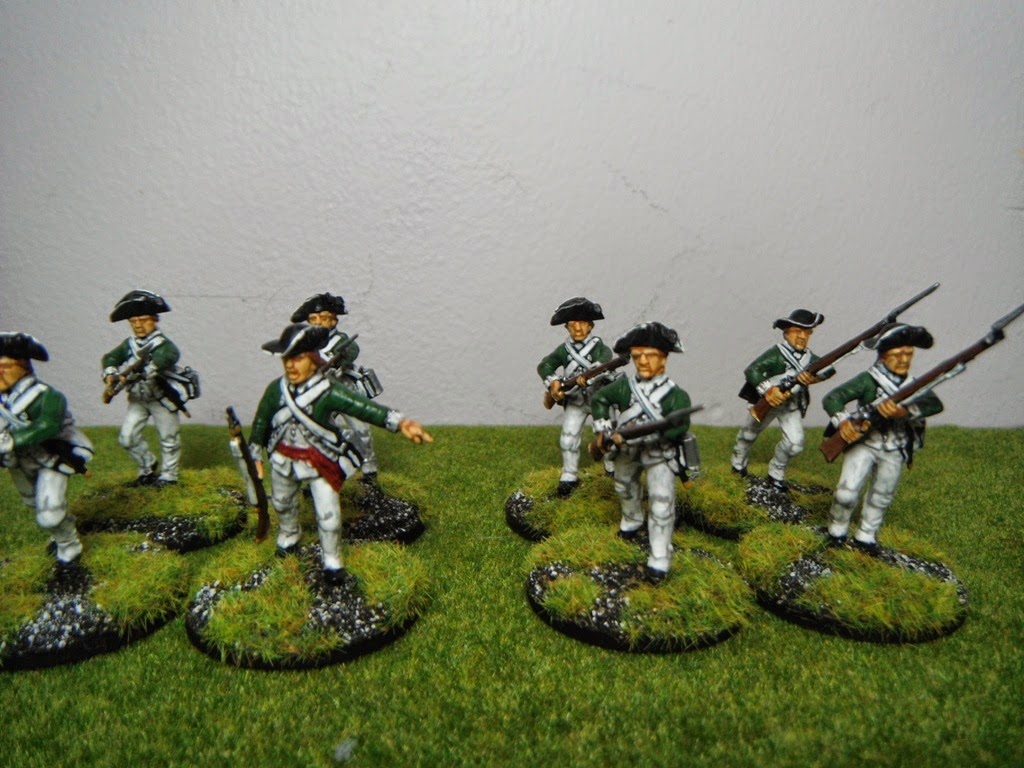 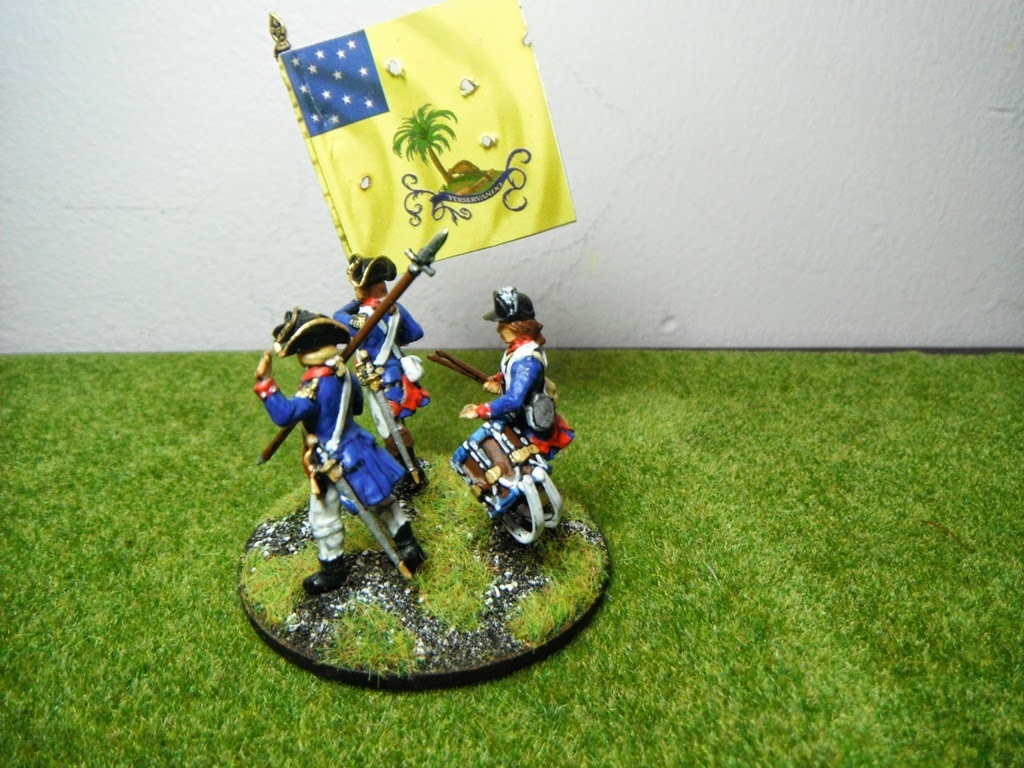 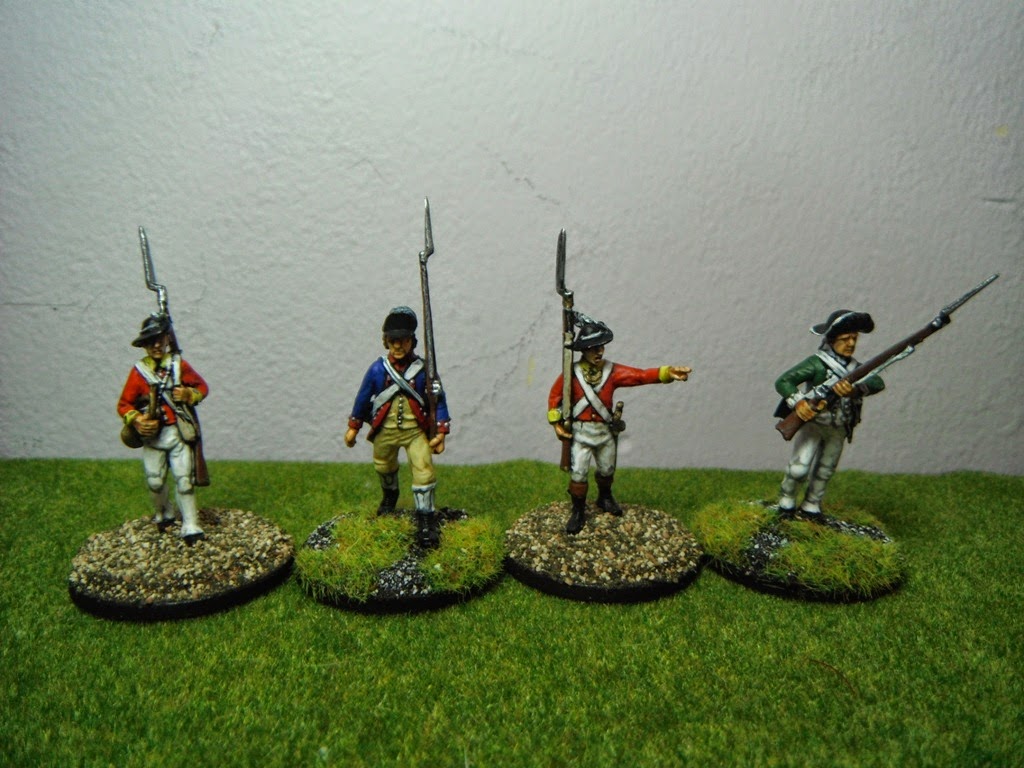 Having been practicing on a few more of the Perry plastics while I wait to get my hands on some of the Fife & Drum figures I must say I have really come to like them. I have begun to enjoy assembling them now, trying different arm combinations, altering slightly the angle of the hats. The glue makes this easy and can be done quite cleanly. Once undercoated it can be hard to believe these are multipart plastic figures I think. For the price these would be great for building up large units and will stand shoulder to shoulder to many metals, but my aims are for skirmish or company level quick games, using C&C adapted rules, but in the meantime I'm just enjoying painting them and trying to achieve a consistent look by simplifying the colour schemes etc. At some point I'll have them all back on the painting table for a facial touch up and highlight and a polishing up of those straps!

Enthusiasm for painting is high despite a few down days recently, often these short projects help drive me on.The three continental command figures I knocked off this morning when it was quite overcast and gloomy but very humid.

I should mention that I only noticed yesterday that my Continental Infantry box contained no less than 4 command sprues and I seemed to be 3 short on the actual infantry sprues, bit annoying but I'll probably keep them in the spares box. Does mean I'm short 15 private soldiers though!

I'll paint a few more of the British for now, might do some loyalists and play around with conversions a bit, but my main focus will be on the Fife & Drum range.

The usual load of pictures taken under different light conditions. The flag will be replaced with something better. 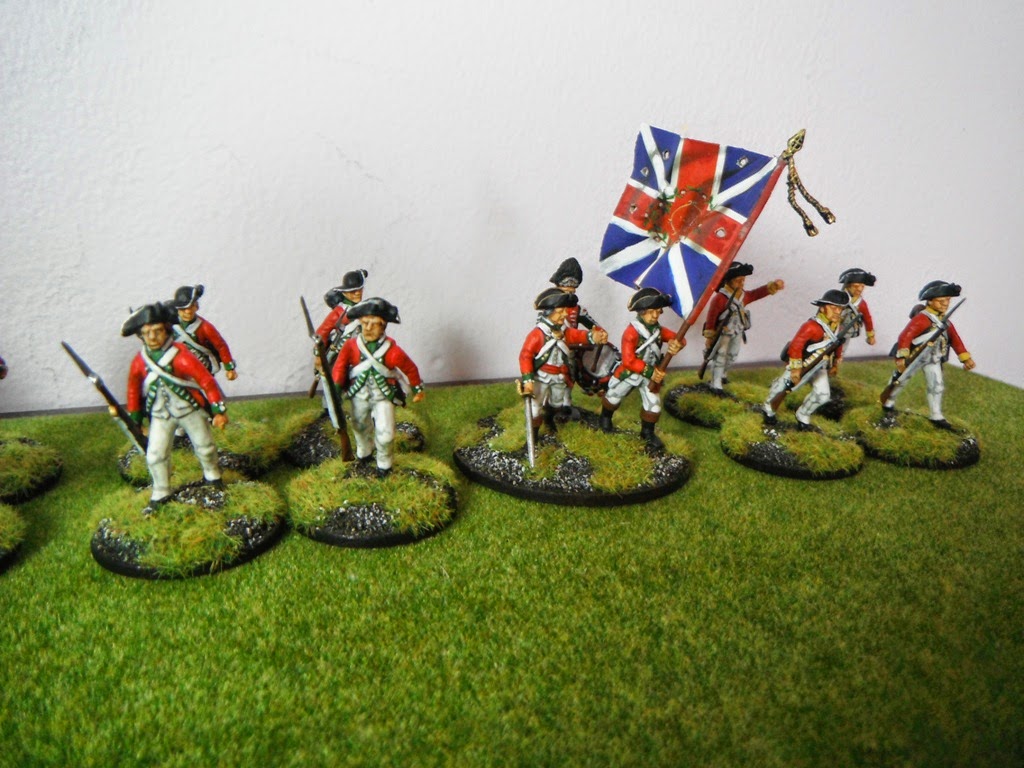 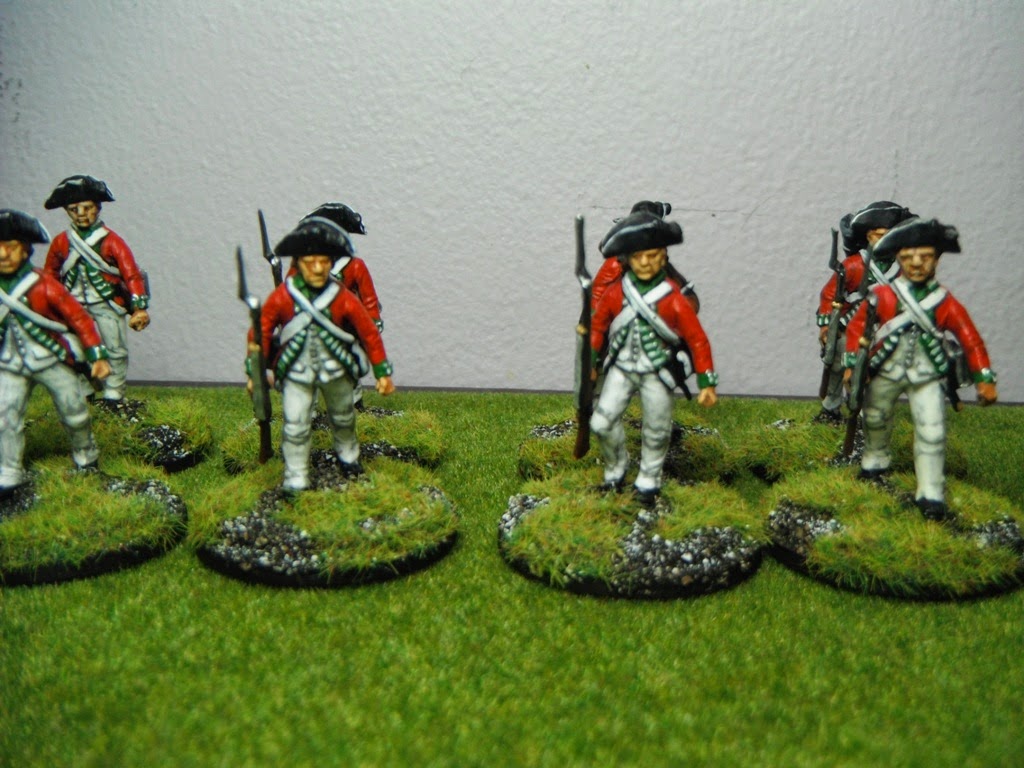 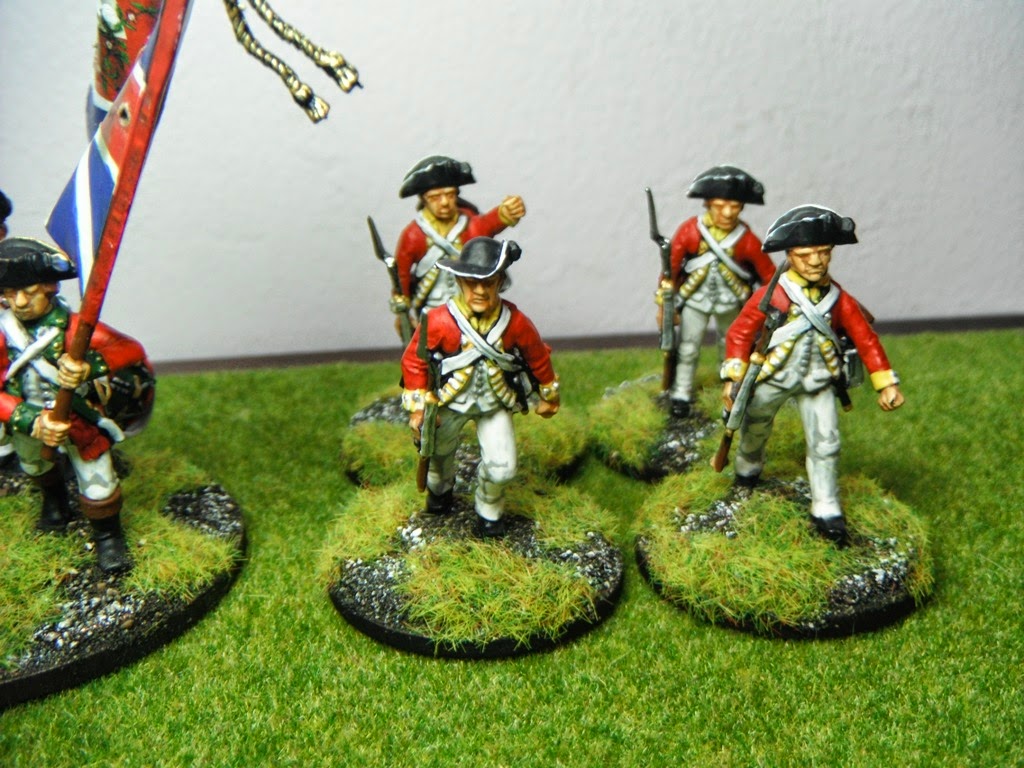 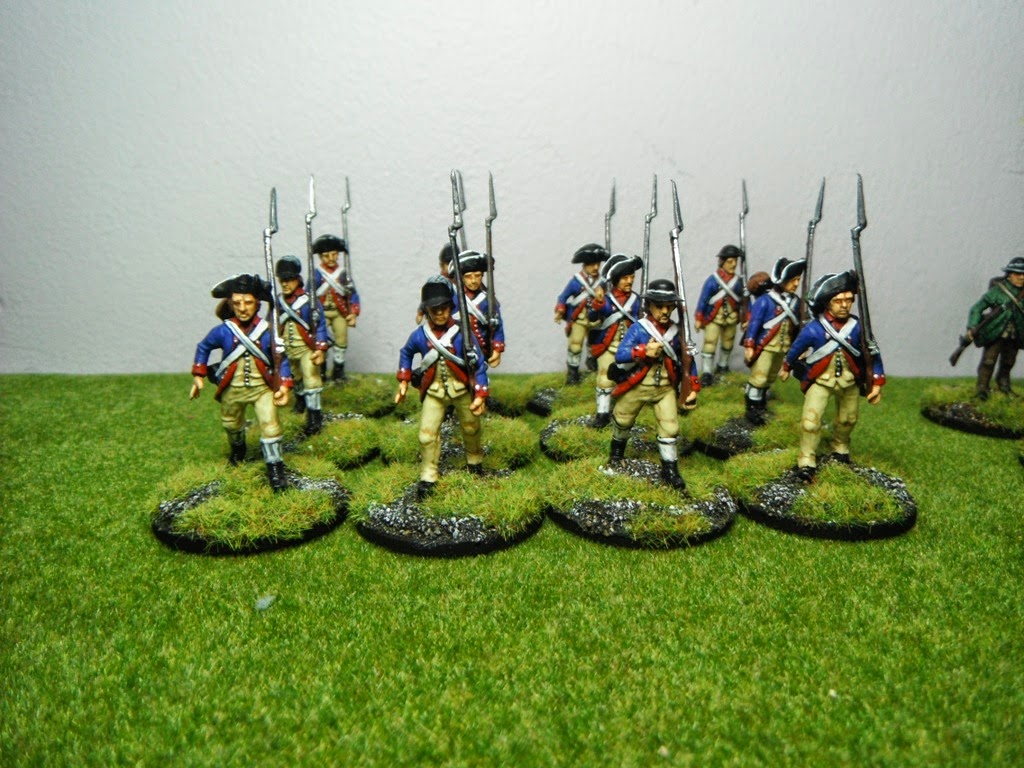 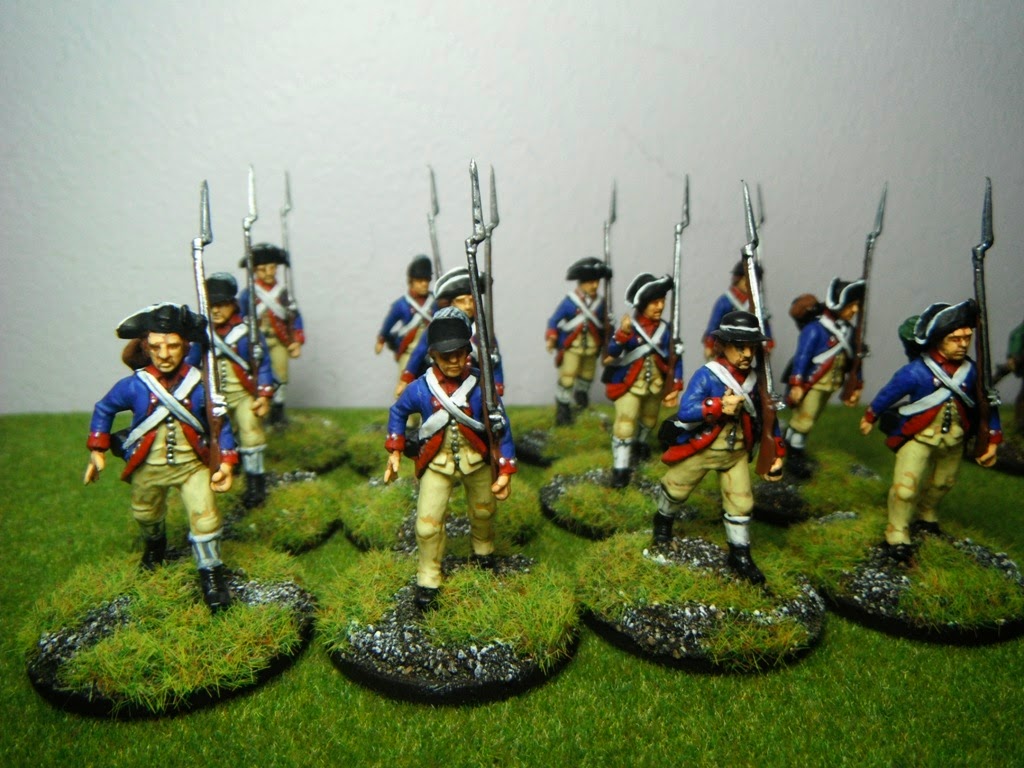 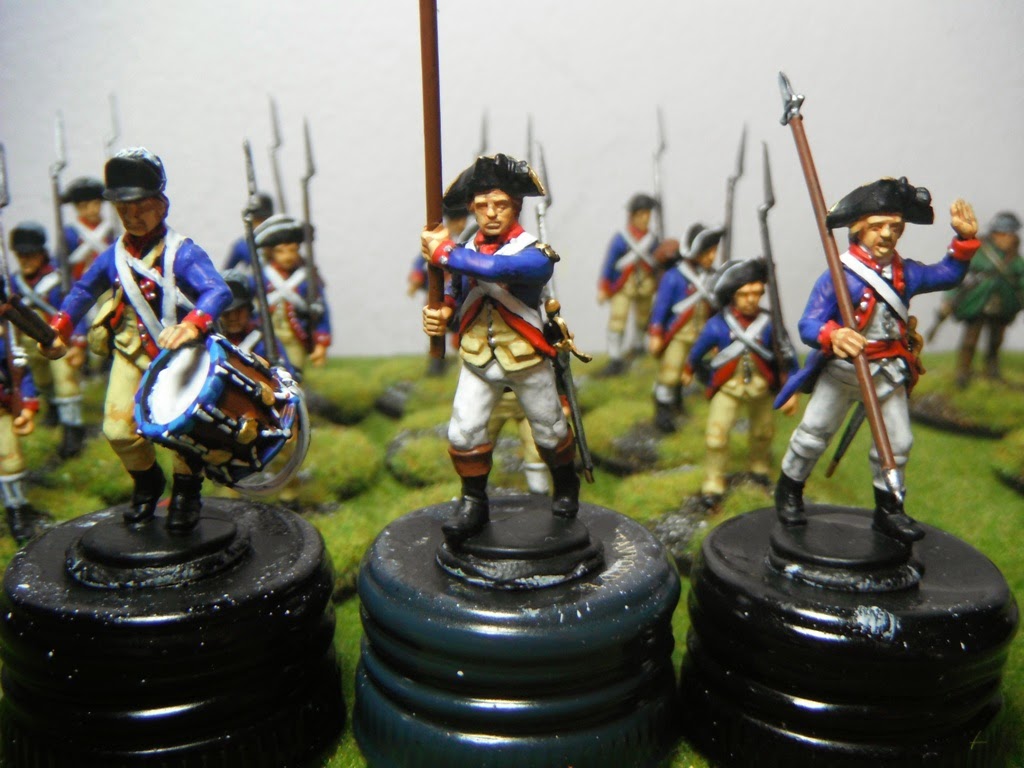 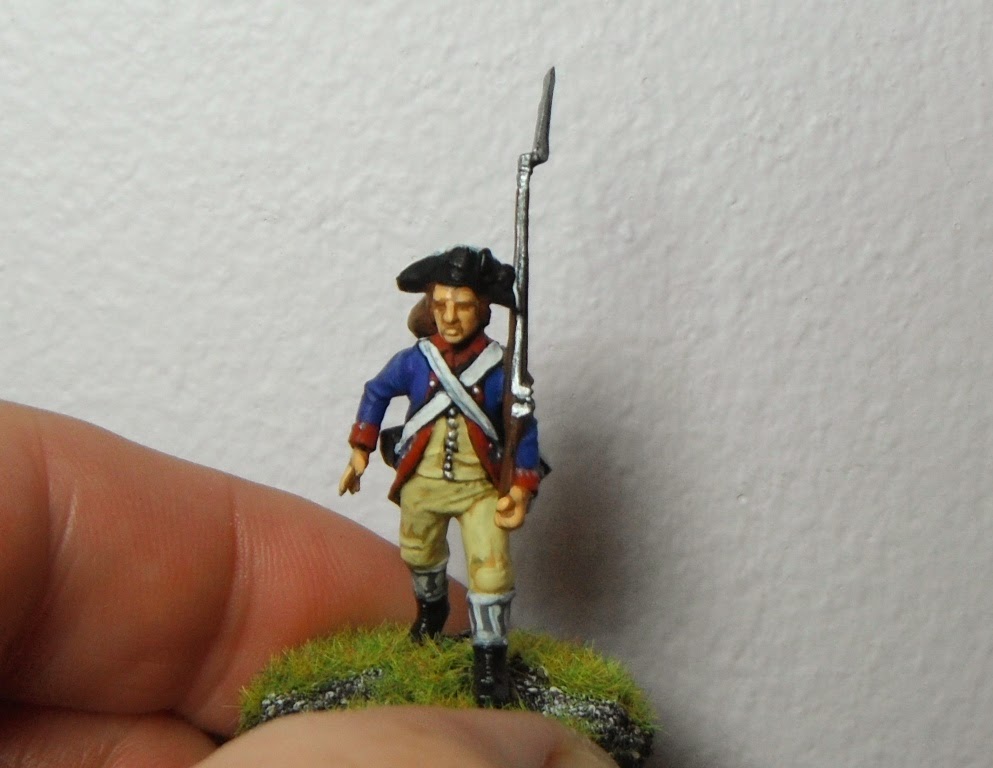 I have painted up a few more of the British box set, including a three figure 'leader'  base. I guess if I'm going to do AWI again it has to be on a 'company' level basis, but for now I'm just experimenting with painting methods and colours/shades. Those leggings for example are now simply a base coat of Foundry arctic grey shade over painted with Vallejo off white. The key seems to be where to apply the white and where to leave the grey shade showing, around the knees for example..... a few attempts and now got it! Flesh has been simplifies too: Vallejo light brown over painted with sunny flesh tone, and I try to hit the same spots each figure if I can.

Also experimenting with chunky bases, gives a bit of weight to a plastic figure and is easier to pick up.

Those riflemen - something was bothering me! I just had to repaint all four in matching green hunting shirts, these garments seemed to be issued at company level at least, so matching is kind of OK. They are also the first figures fully bases.

Photos - been building a little space for taking my pics, the bulb is a 70w miniature CMH, the light is very balanced,maybe leaning more towards the blue spectrum. Not quite finished yet, but its producing some nice crisp shots. 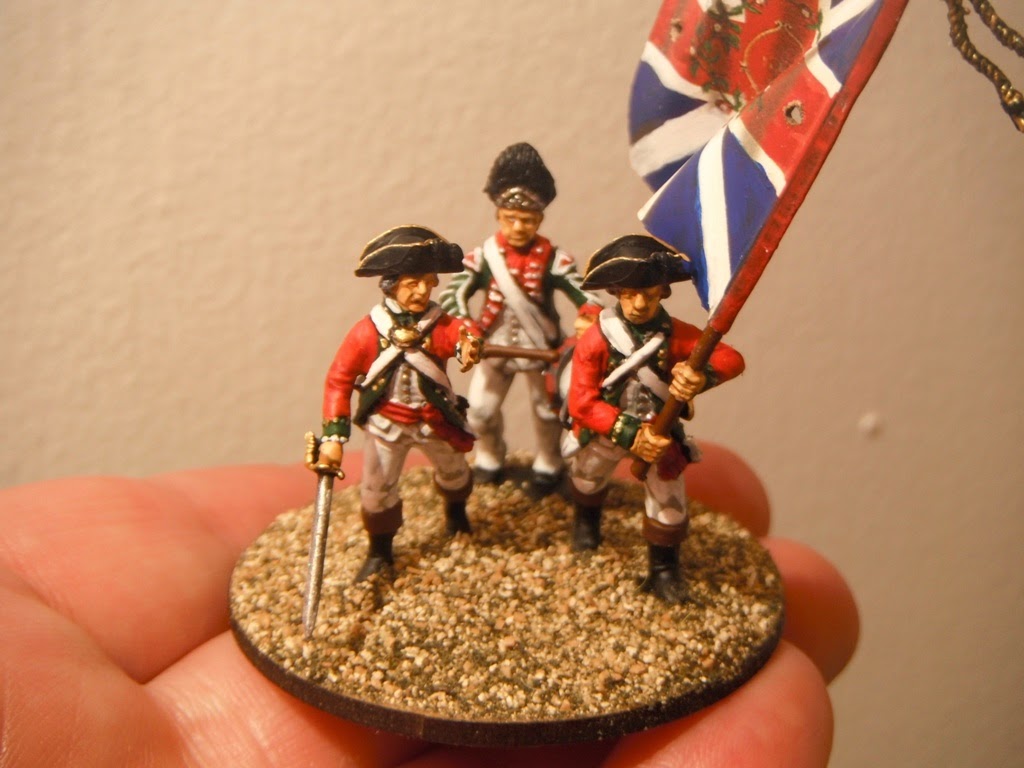 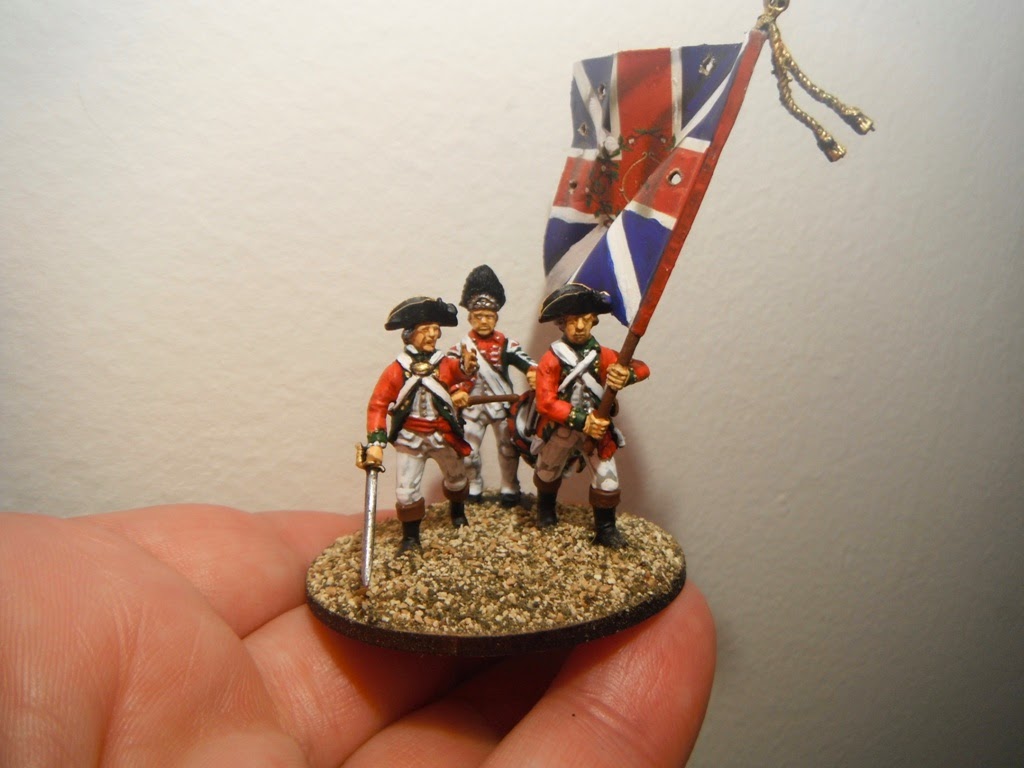 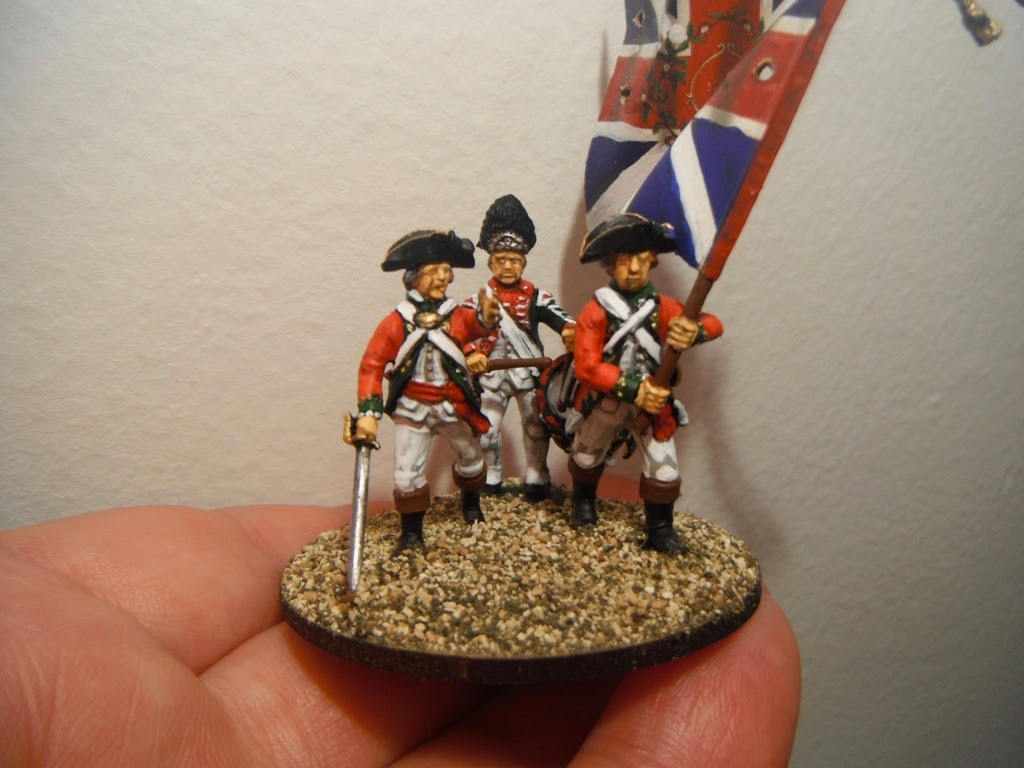 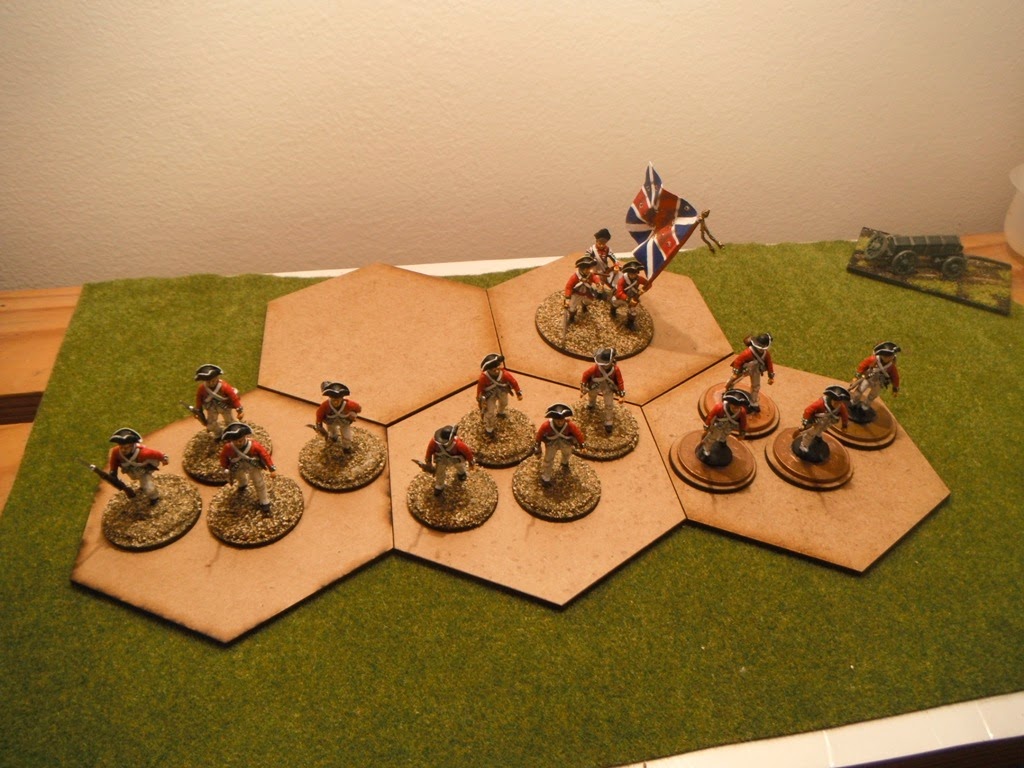 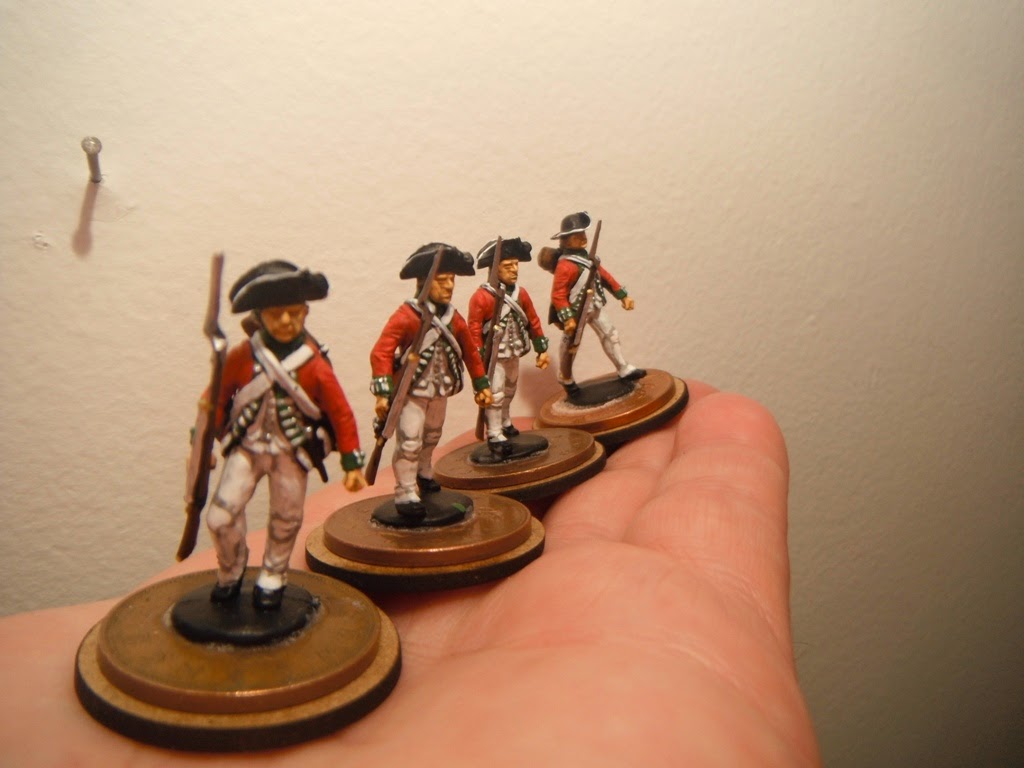 A quick update to show some of the 20mm ACW figures I am currently painting for Old John. A mix of makers here but all fine little castings, this lot consists of Reb markers, retiring, falling back etc, low ammo markers, artillery battery flag bearers, casualties etc. Among them are great some character castings - Zouave carrying comrade for example and the magnificent 'Reb with chicken'!

I'll be back onto more 20mm ECW's next week, just have a couple of guns and crews for John to finish first.

20mm ACW figures for the collection of Old John. All require a matt varnish finish. 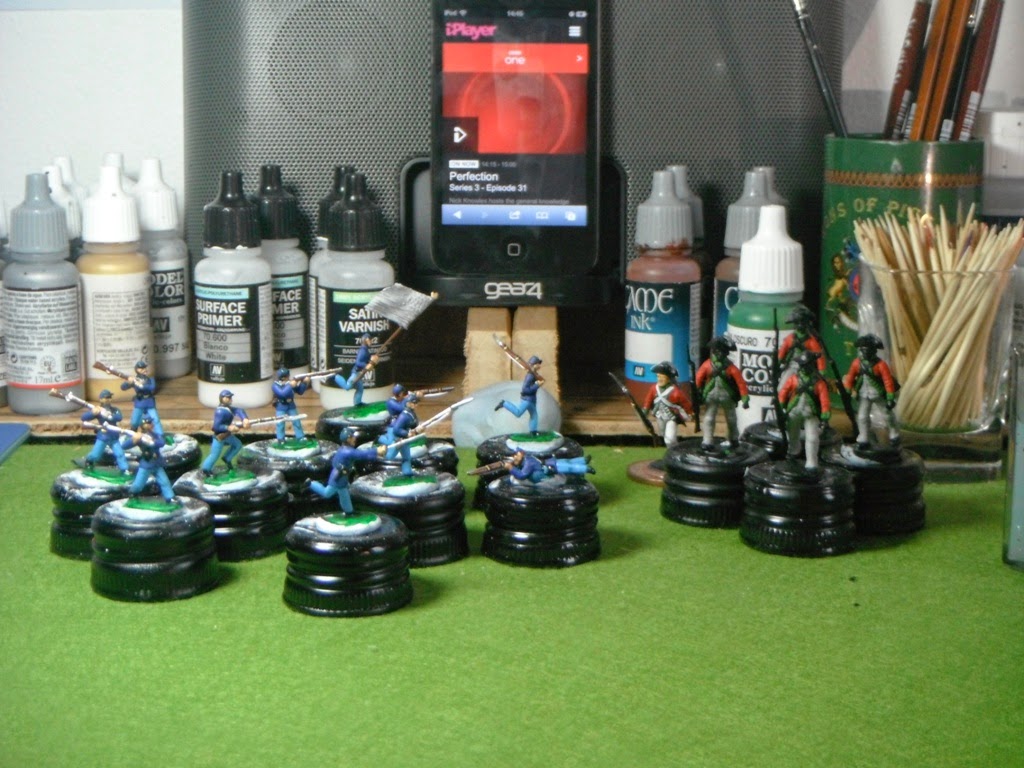 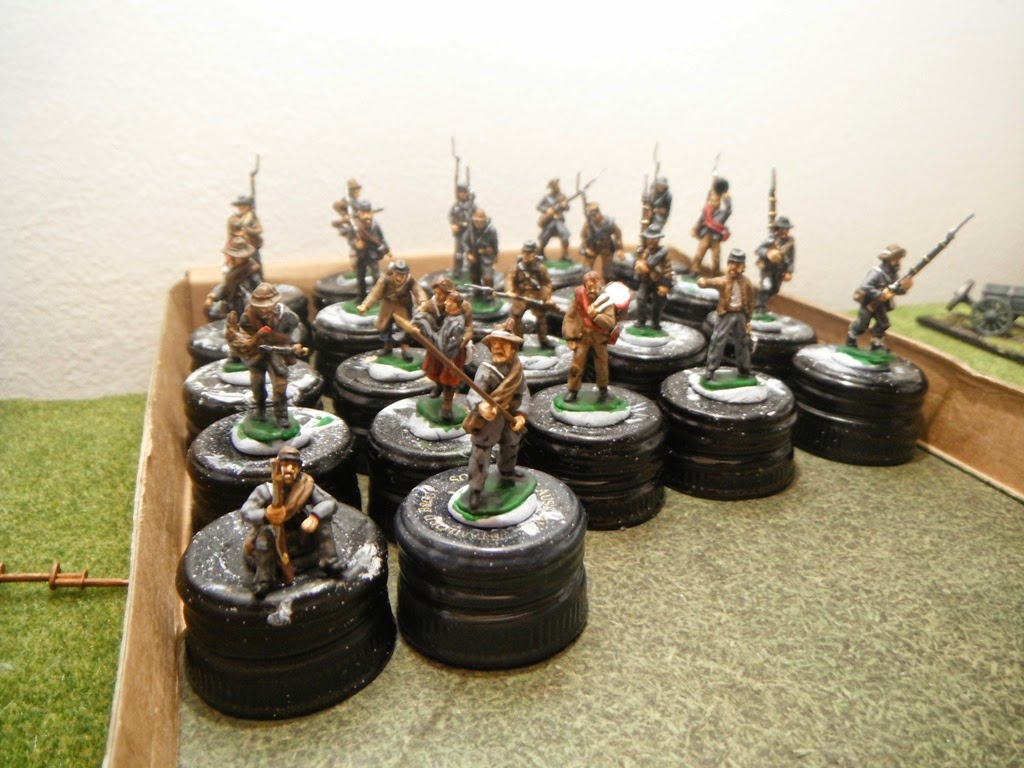 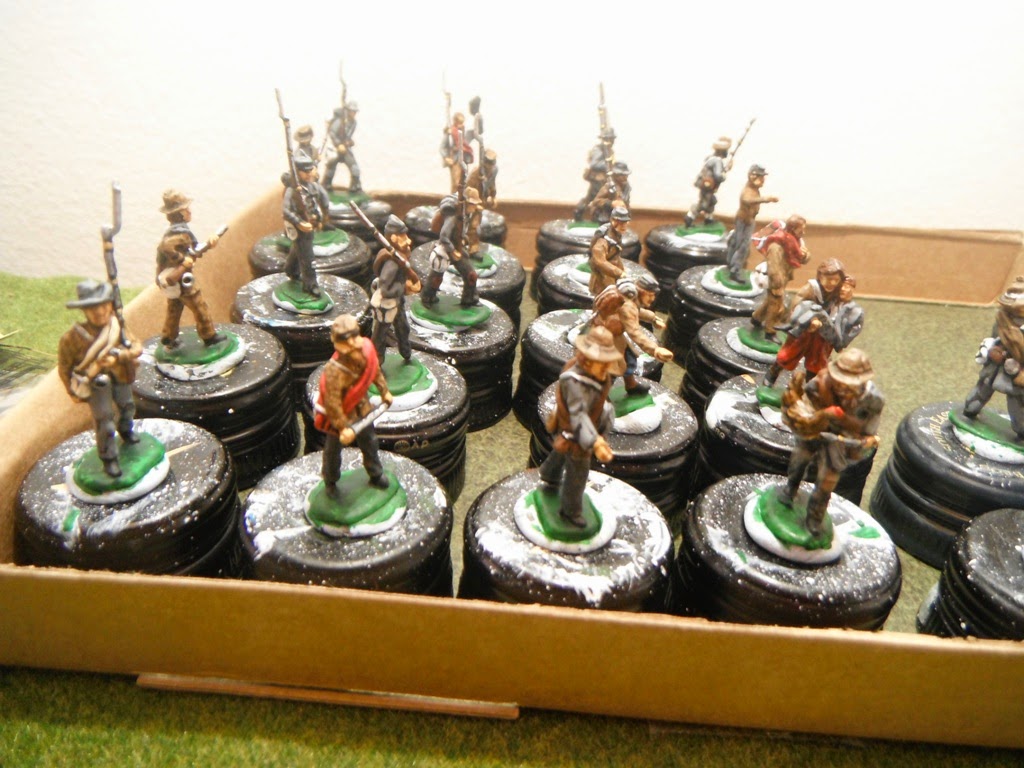 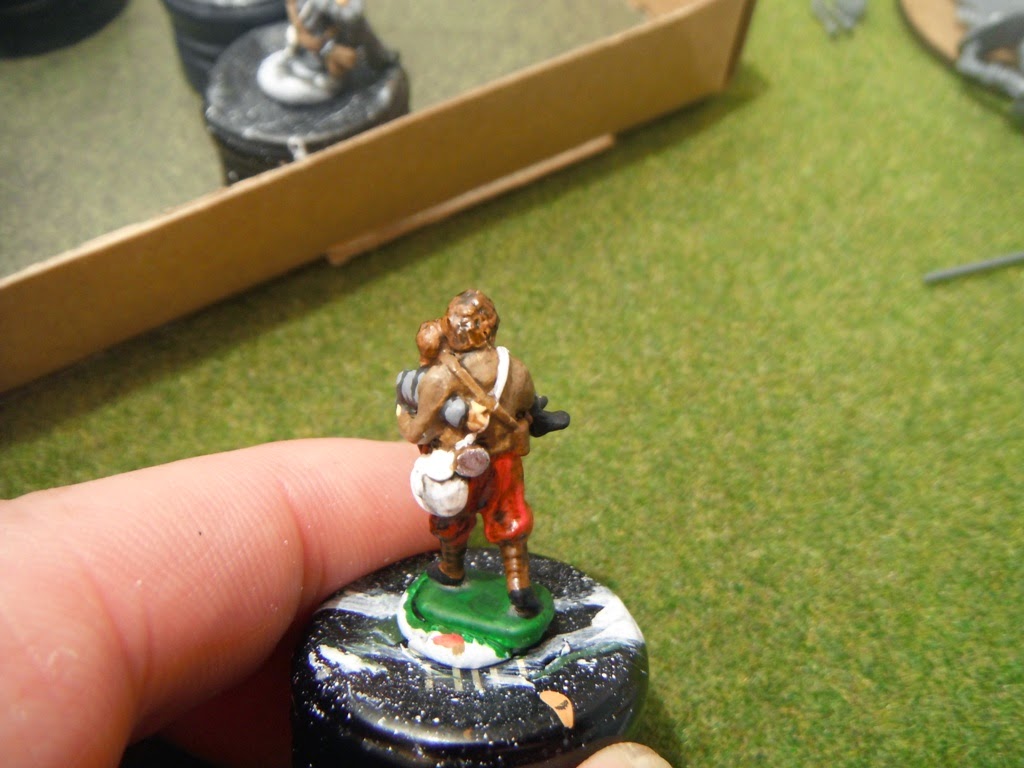 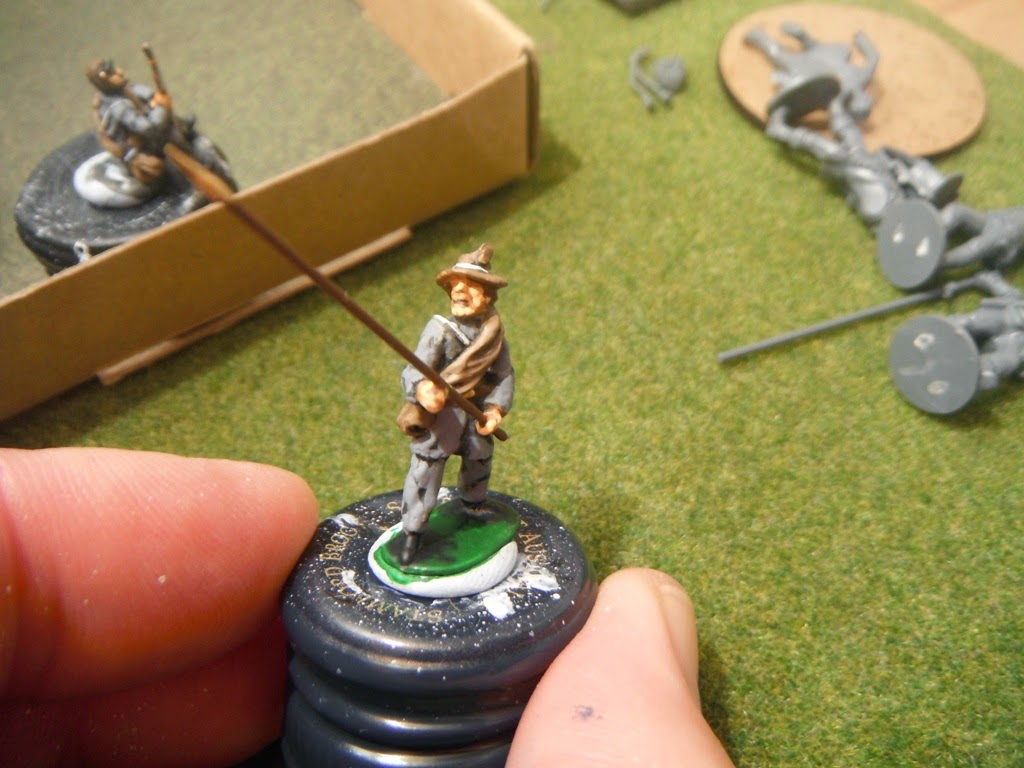 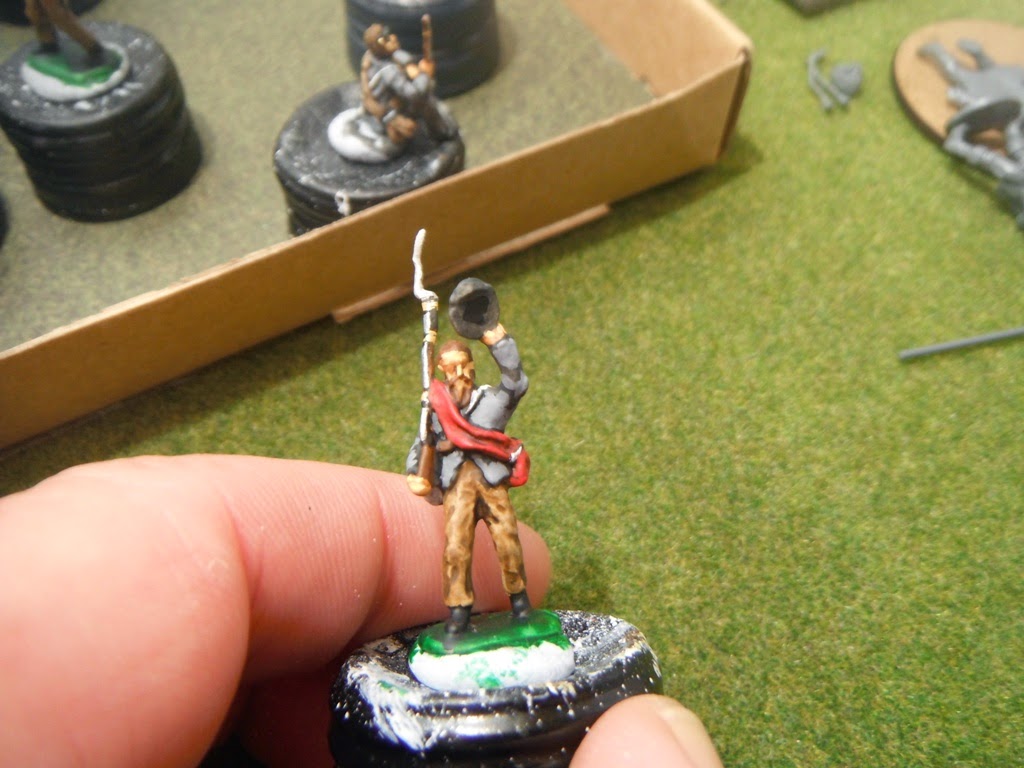 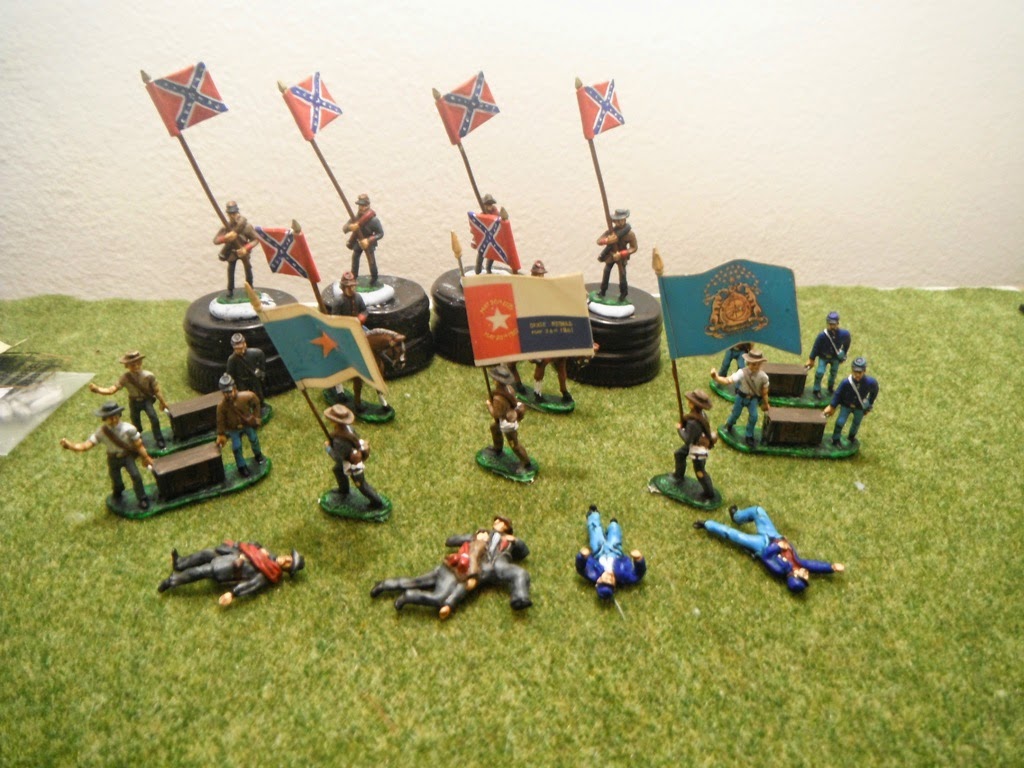 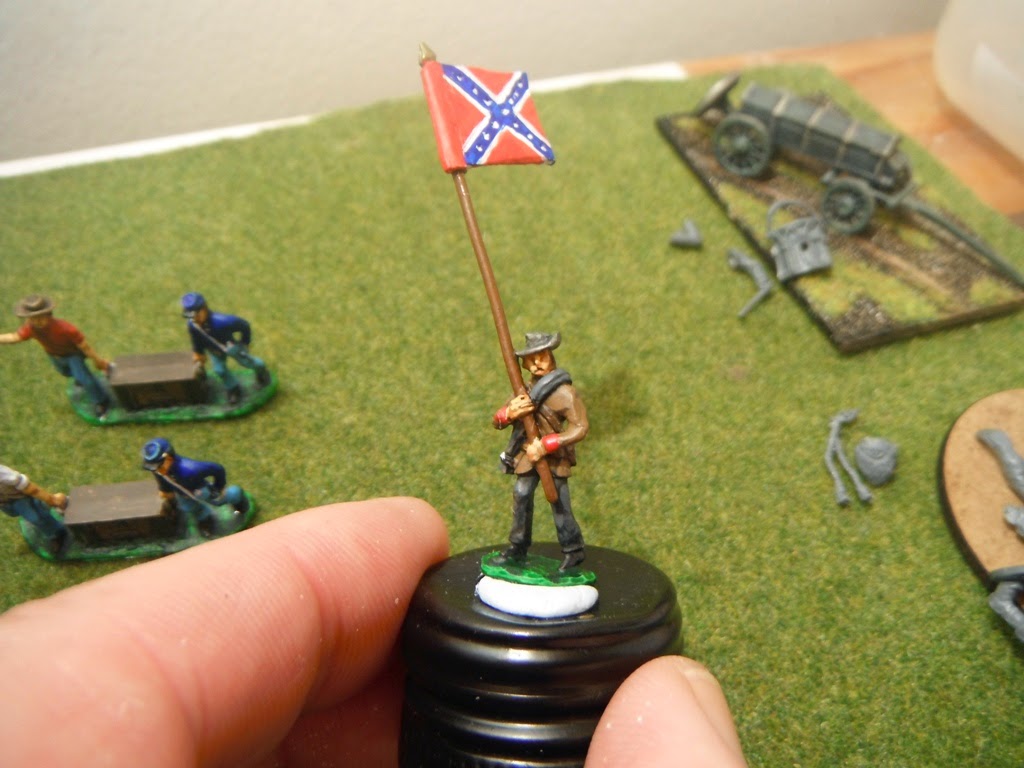 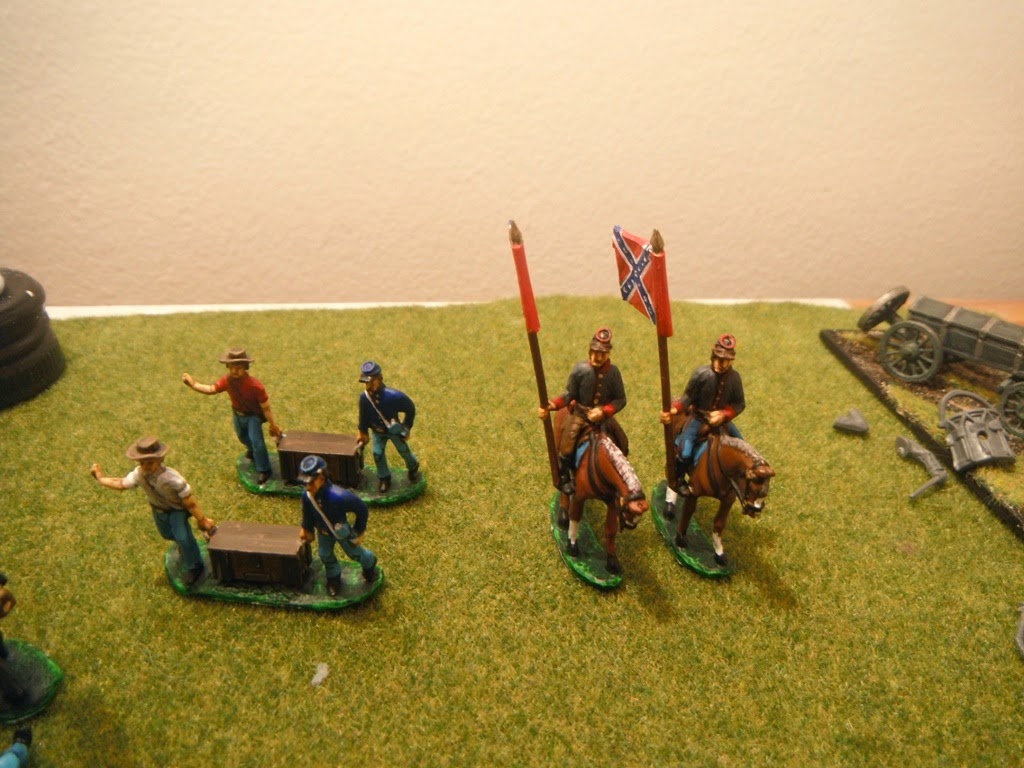 I'm slowly settling back into my old routine of painting regular hours again. I have painted more figures for 'Old John' - 20mm Strelets plastic command set and ACW's and I continue to work on my 28mm painting method, it having been quite a few years since I painted in this scale. I'm trying to improve my faces in this scale without going to far into eyes etc as I like the simple effect from a light brown base and a sunny fleshtone. This method is used by Scott MacPhee, who I consider to be one of the very best painters of 28mm AWI figures and who's style I am quite unashamedly trying to emulate, although I'm not there yet. (click here to see the original post and pictures that inspired me to try this).

While I am waiting for the Fife and Drum stock to arrive at Crann Tara - the range being only previously available in the US - I'm playing around with a few more Perry plastics. Those 'advancing' Brits were annoying me! Something not quite right there, so I decided to try the trail arms option and consider it a better pose, it certainly makes painting easier as the advancing pose covered much of the front of the coats and the lace etc and it was hard to get the brush tip where it was needed. I'm in the process of painting the new arms, having removed the old ones with no damage done.

My painting environment has improved too and I'm sure it's helped to give me the boost I needed. I'm back upstairs again in the spare fourth bedroom (some may recall this had been used as an 'art room' by the kids for many years and was covered with paint on all four walls and the ceiling! It's only small at 9' x 7' but I have everything together up there again now and have room to keep a Commands & Colors game set up so that at any time I feel like it I can play a few turns to keep my hand in. I'm planning to enter the next Vassal competition of cc.net so I'm also working on Vassal. There are fewer distractions upstairs and I'm finding I can paint for several hours again at a time with of course coffee breaks etc.  The view from the window is quite pleasant, and even on hot days like the last week there is always a cool sea breeze blowing through.

On the subject of Commands & Colors it would seem that exciting developments are in the planning  and testing stage. Following the Prussian expansion will be the much discussed "La Grande Battles" expansion and then the "Generals, Marshals and Tacticians" set. As Richard Borg  posted recently:

"All I can really state on this subject is "Wait for it". Leaders are about to take a very bold step forward, that is when the Generals, Marshals and Tacticians details are released by GMT. Right now it looks like La Grande Battles along with the Generals, Marshals and Tacticians rules should be out sometime next year.Fans of the Napoleonic game will not be disappointed!"

I'm sure all fans of the Commands & Colors Napoleonics game will welcome some development of the 'leader' rules.

Anyway, here area few random shots taken over the last few days as I have settled back into the old art room, I need to buy a new table top to give me the length and size I want  but it's getting there. Note my new C&C plastic block storage boxes, just right and incredibly cheap on eBay, I paid £8.00 for 20 boxes ( they are sold as business card boxes and are perfect size), I can see exactly whats in each box and set up time has now been slashed! I'll be ordering more for the Austrian expansion and they are useful for many other things hobby related no doubt. 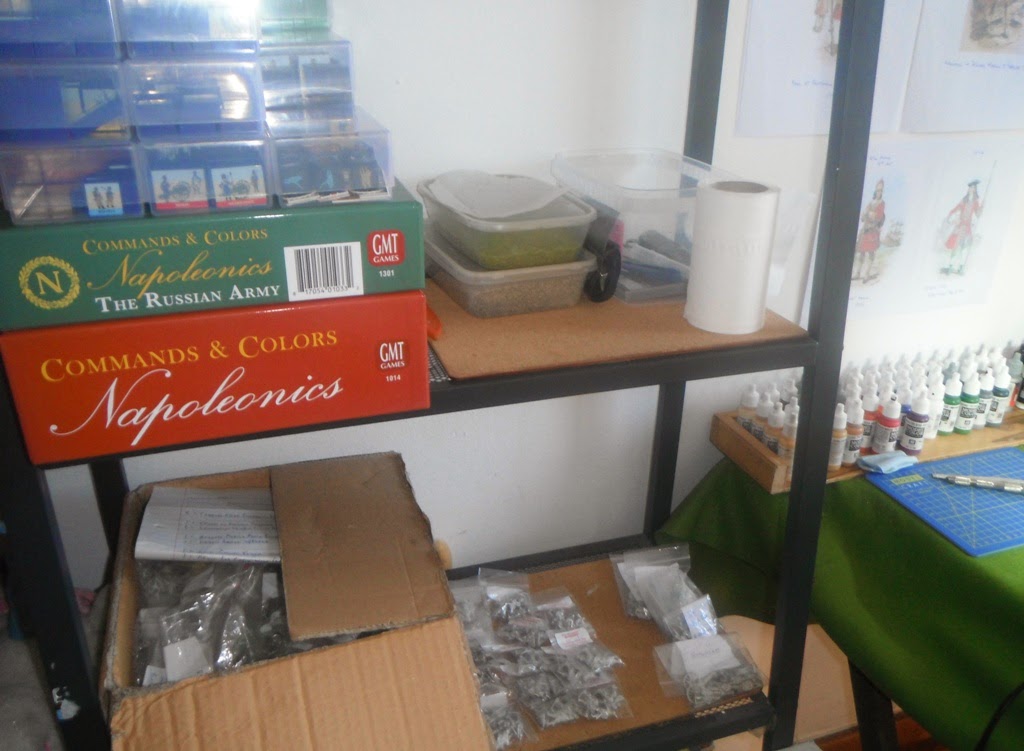 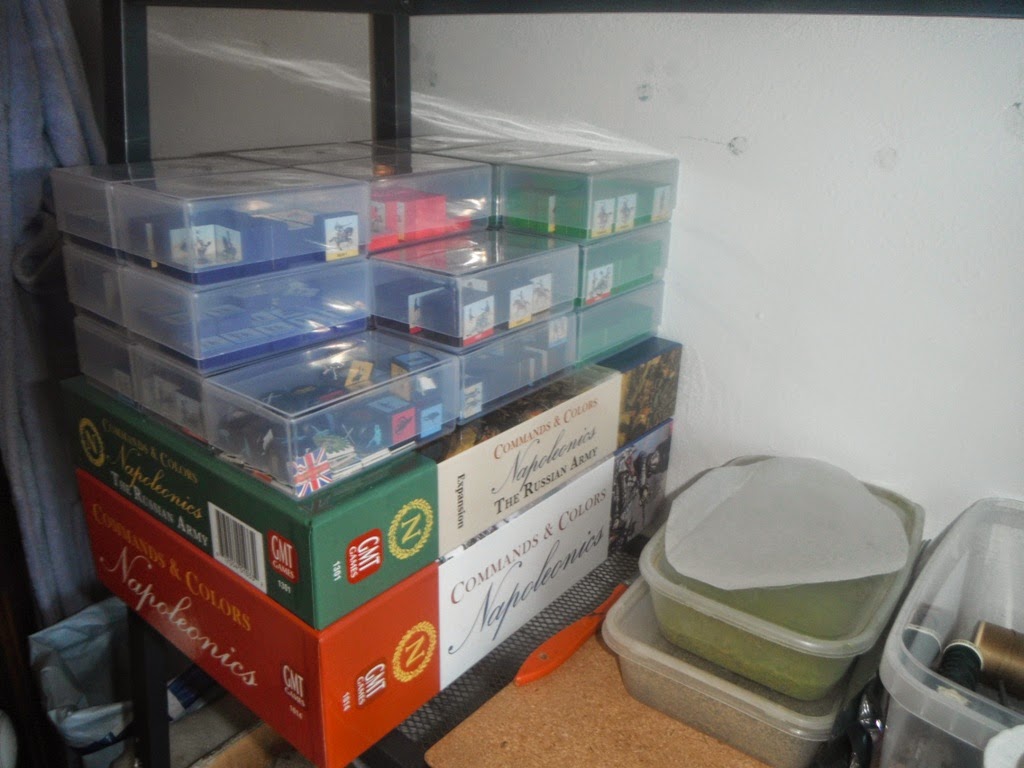