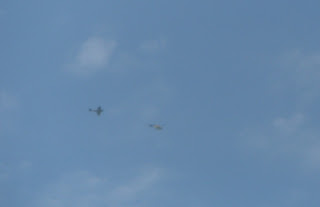 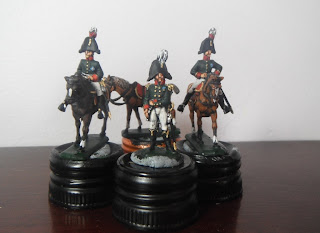 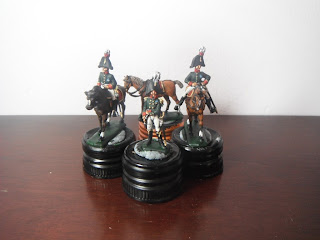 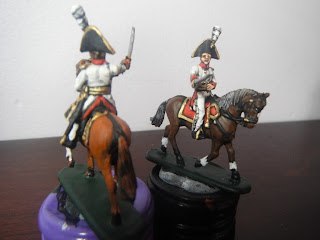 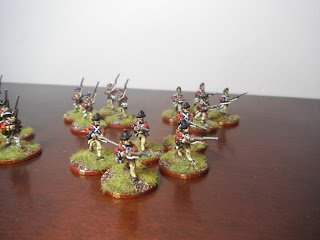 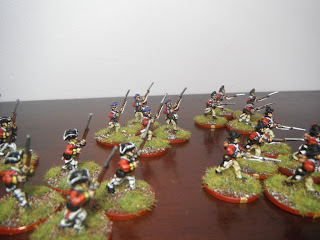 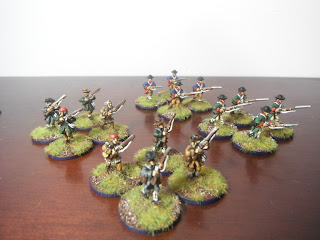 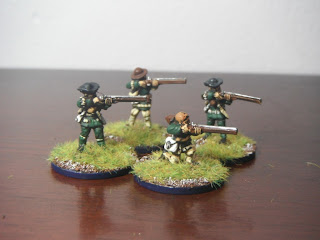 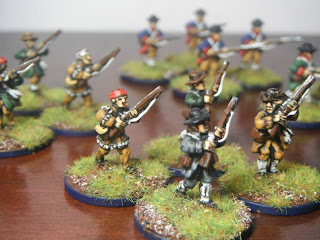 Lovely set of figures, from an unknown German maker - a set of 8 Russian Orthodox Priests/ Monks. Enjoyed painting these, blacks not always easy to get right. A smattering of gold helped to lift them slightly. I had a crack at the Icon .... tried for a Godly sort of head, but it just looks like Jimmy Page! I can't help laughing when I look at it. Well, it is only 10mm x 5mm!

The other three figures are a cowboy and two mountain men . Not sure of maker as I type this, John will know. Lovely castings again.

All for the collection of 'Old John'. 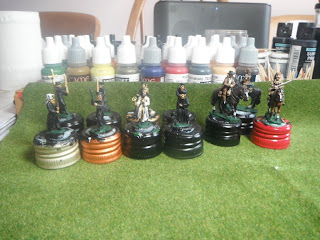 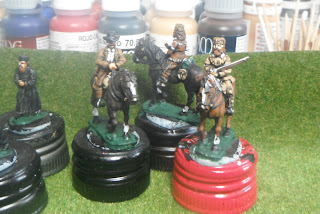 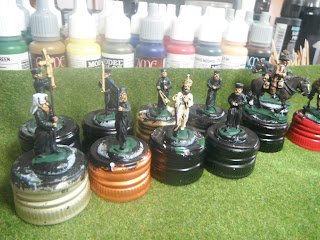 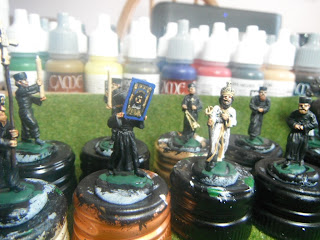 I thought I would share some pictures of the first of the huge box of 20mm ACW figures I'm currently working on for the collection of 'Old John'. This is the Qualiticast 'Reb HQ' set featuring several Generals (Lee, Stuart, Longstreet etc) together with camp table and chairs/ fire with coffee pot etc. The large tent was a bit of a job to assemble due to its weight, but turned out well I think, with several coats to build up that 'worn canvas' affect. The castings are superb, really crisp and accurate. John tells me that they are now out of production, and that he has been attempting to buy the moulds, so far without success. They deserve to be made available as they are really fine ACW figures.

This was by way of an initial test paint to establish shades etc. The Union HQ set will follow shortly, first I have to paint up a wonderful set of Russian Orthodox Monks with Priest, again full of character and personality. 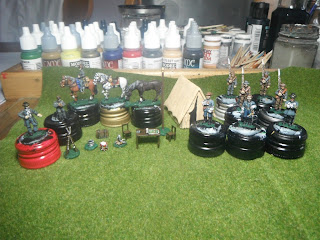 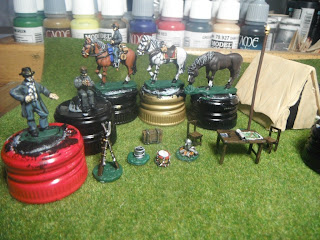 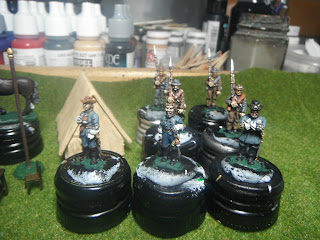 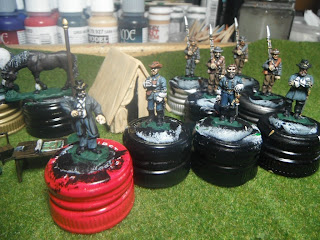 I was pleased to see my blog hit counter turn 50.000 page views yesterday, it's nice to know that others are interested in what I do here. Made me think how far I have personally come since starting this 'therapy' blog and of the twists and turns along the way, such a short time really, but time enough for me have changed direction a few times. I'm still not yet sure where I'm going with my own wargaming interests, maybe it's time to give up painting for myself and just concentrate on my commission work. It's become a 'proper' part time job now, providing me with a steady 25 hours per week of work, which is more than I could have hoped for to be honest when I started. I have found that my painting skills have come on very nicely too, and above all speed and accuracy have improved. So thanks to everyone who looks in here, and lets see where we go in the future.

Commission work.
The 10mm AWI commission is just about finished,the final 12 figure unit undercoated and ready. A few pictures of the last few units below. Monday I begin work on some wonderful 20mm ACW's and I also have more WoR 6mm bowmen in hand plus a load more H&R Austrians for another regular customer.

Vallejo paints.
I have been won over by the quality of the Vallejo paints and added further shades as well as several inks etc. The black primer is one of the best I have used, it is a first class product that flows well off the brush without any clogging or filling in of fine detail and dries beautifully flat. I have also added satin varnish and restocked on the matt varnish, again a reliable varnish that causes me no problems, even when applied over the 'magic wash.'

UK supplier - recommended.
A word here to recommend this very reliable supplier of Vallejo paints in the UK that I have been using, great web site, easy to use and to place orders and next day service on my orders so far. Friendly communications. Take a look for yourself.
http://www.snmstuff.co.uk/

Dymchurch.
I'll leave you with a few pictures (as usual!) .... 10mm AWI's and a few shots taken on my morning dog walk today of sleepy old Dymchuch on an incoming tide. With the forecast set fair for the weekend I expect it will be very busy with tourists and holidaymakers, personally I like the quiet mornings ..... reminds me why we moved down here.

Thanks again to all who look in here, have a good weekend. 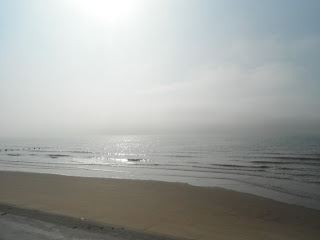 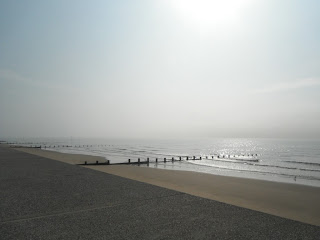 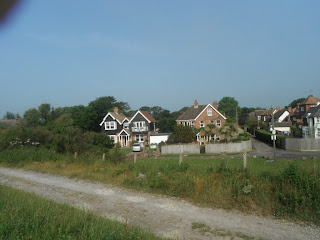 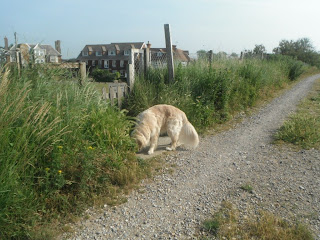 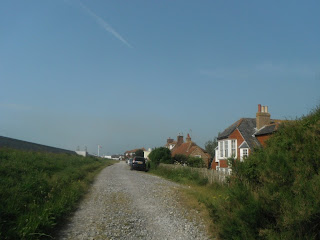 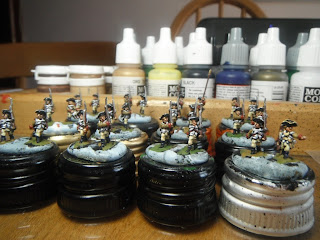 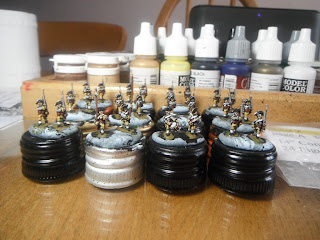 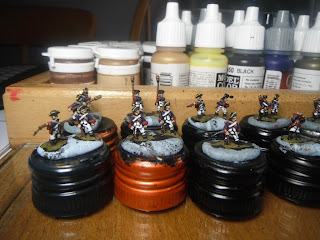 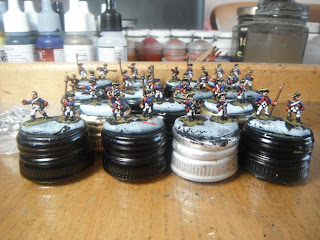 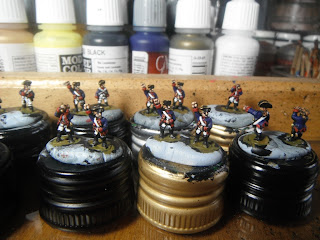