Really very pleased with the way these two regiments of French Cavalry turned out. They are of course commission work for Tony and as usual arrived in spic and span condition along with a full reference guide for painting. Being the only French cavalry unit I have painted toward this project - the previous cavalry wearing sky Grey coats - I wanted to find a shade that differs from the British Scarlet as the reference was of slightly deeper colour. I started with the usual drybrush of Cavalry brown ensuring all shade areas were covered, this was followed by a more controlled dry brush of Flat Red which was then worked back on to give some highlights. At this stage they still looked very 'flat' but I went on and painted the rest of the figure with the intention of coming back as a final colour to further highlight the red with Aramanth, that really helps the figures to 'pop'. The two trumpeters were challenging (in a good way), the flashy Royal Livery looked very complex to reproduce on a 20mm casting so I had a good think about how best to approach it as an impression. I decided on a sky Grey dry brush to start with followed by stripes of red edged in fine blue lines (the coat was actually blue beneath all that lace!) followed by some fine white lines and then finally dots of silver down the red to represent the chain link silver pattern. I must admit it does look quite busy but when I look from a few inches away I think it represent the livery nicely?

Black horses were requested for one unit and mixed dark brown for the other, the trumpeters being the exception on Greys of course. My standard black horse is a black base followed by Black Grey highlights and a touch of drybrushing here and there on tails and manes using Ivory or London Grey. Gloss varnish was requested as usual and I'm finding my confidence is improving somewhat now having used it several times, it does need to be carefully applied, thinned slightly with water, and a couple of thin coats leaves that classic shiny wargame soldier look. If I have one comment on the use of glass varnish it's that it can tend to over exaggerate some of the highlights, something to bare in mind when applying them.

Tony requests the bases be left black in order that he can apply his house shade of green. Overall a very satisfying paint job. I have some more infantry units to do for Tony, but next week I'll be painting for Simon, more of the lovely 10mm Warmaster Fantasy Figures.

Les Higgins WSS 20mm  cavalry for Tony. Note the white saddle cloth edging to the trumpeter was spotted after taking the pics (always useful) and corrected to silver! 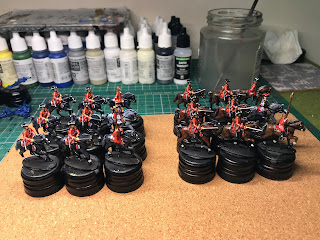 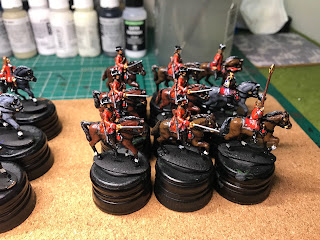 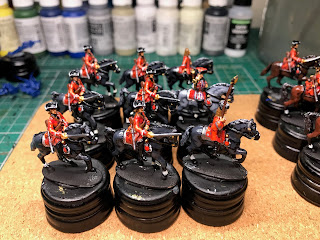 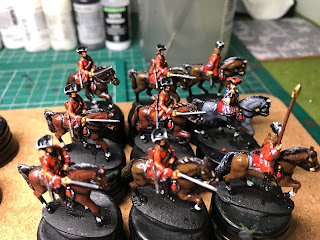 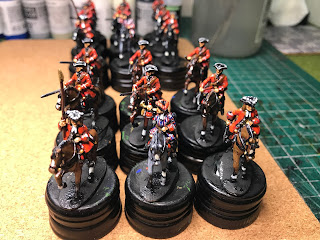 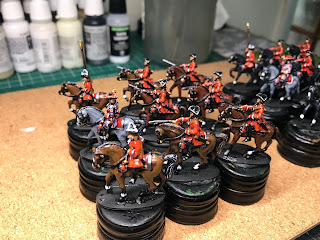 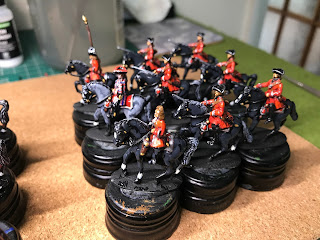 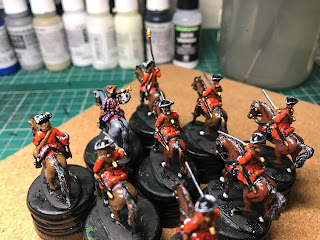 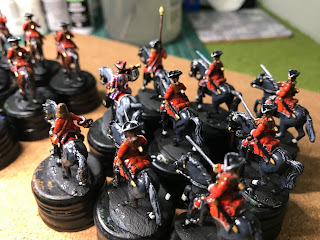 Finally the Epic Napoleonics have taken hold of me! I can't help myself, I think I have fallen in love with them. Now painted over 300 of them and they will feature in the next post. Meantime here's a glimpse of some of them. I have decided to go with 60mm frontage bases for DBN so everything is being doubled up. More in the next post. 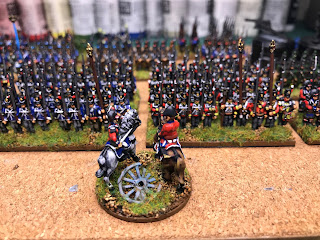 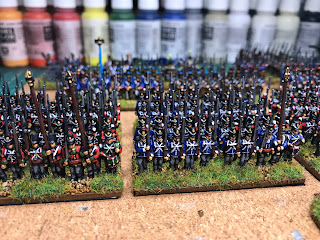 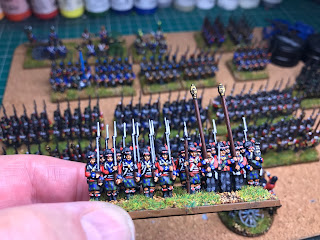