OK, I'm going to spare you my gruff mumbling voice this week and do a good old photo update of this weeks progress and what's ahead. 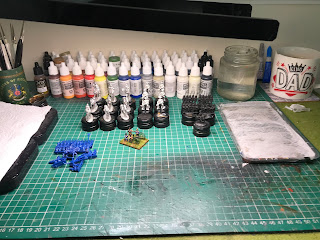 Above: The painting desk this morning.

Firstly, I have finished the latest batch of 15mm ECW's for Graham which consists of more (the last?) of the Peter Pig cavalry and a wonderful camp scene set by Blue Moon. The cavalry include eight figures representing the Kings Gentlemen Pensioners as present at Edgehill, and so being a unit of wealthy individuals they are wearing cuirassier armour which is a bit more polished than the usual blackened armour and I gave them somewhat fancy matching saddle cloths. I'm very pleased with the overall look of these, I have thoroughly enjoyed painting the Peter Pig cavalry. The camp set consist of some lovely character figures as you can see, topped off with a commanders tent. I was a bit concerned that my paint scheme was a bit too Medieval looking but Graham is happy with it so I'm happy.

Next up on the commission front are more WSS 20mm Les Higgins French cavalry for Tony, the usual two regiments each of nine figures. I'll be prepping them up this afternoon ready to start tomorrow. As usual with Tony the castings are always crisp and clean and fully cleaned of any flash etc. We have a system now where the Les Higgins riders are left off the horses until I have painted them due to the outstretched sword arm that made painting the horses necks slightly awkward. The command figures are supplied already glued on as they are Irregular Miniatures on Les Higgins horses are require a bit of 'fettling' (Tony's word), to make them sit correctly, Perfect! 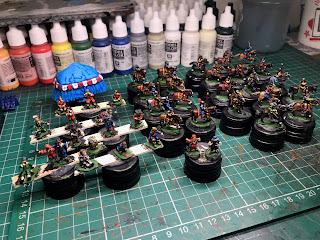 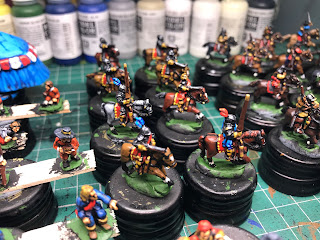 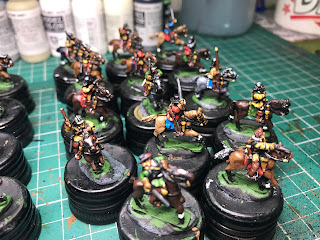 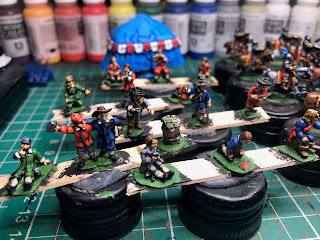 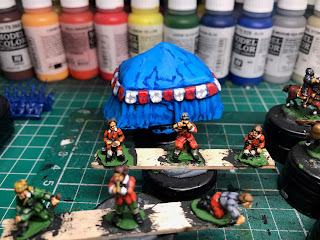 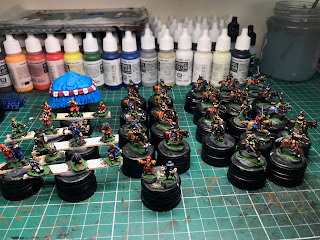 I have also managed to knock off a few more Epic Napoleonics with the first French infantry painted. Great fun to paint I decided to go with most bases in field dress and a couple wearing greatcoats, it would be possible to mix them but that would require more cutting of the strips and as this is intended as a quick DBN project probably a step too far. Once again I'm happy with the overall look, a much quicker paint job than I would if painting say AB's but perfectly adequate for my plans. That's over 200 infantry painted in just over a couple of weeks and it really does not feel like I have spent that much time on them at all!

Massive thanks to Graham for sharing some Epic sprues with me as a gift, this will give me light and heavy cavalry for both sides, Highlanders, Old Guard, and some Prussians towards the next planned army. Much appreciated and all will be put to good use. 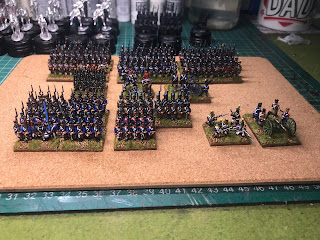 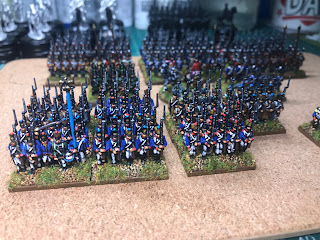 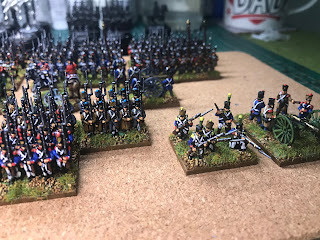 First of the French, 9 points in DBN terms. I'm waiting for another French infantry sprue to add an additional command base and a couple more full dress bases. 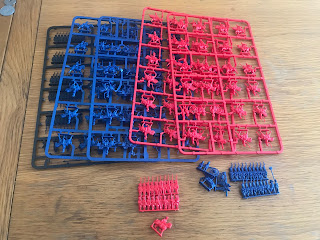 Thanks to Grahams generosity all of the required cavalry types are covered plus Highlanders and French Old Guard. 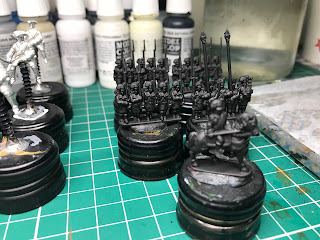 These Epic Highlanders will be painted this afternoon and the metal 20mm's at left will all be primed ready to start tomorrow for Tony. A small blob of blue tac glued to the top of a screw holds the riders firmly in place for painting. 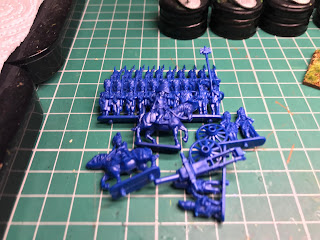 Below: I was asked about my seemingly limited number of paint post on the desk, as you can see I keep plenty of others in the drawer below, although many are spares to replace those that run out. Most of my painting is indeed done with what is the desk, carefully selected over the years for coverage. 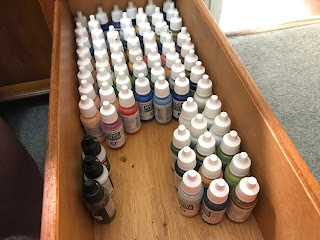 Right, I'm off to paint some Highlanders, found a useful kilt painting tutorial by Miniature Realms (Stuart) on YouTube, well worth subscribing to his videos if you are painting the Epic range.