Following on from yesterdays comments re the Epic ACW's I wanted to add a few more notes about the way I am trying to approach painting them, I'm aware the hobby blogs are going to be full of similar posts as the sets begin to roll out and it will be interesting to see how others tackle this. I wanted to record a step by step of my method, the shades used, and my reflections on the product as a whole.

I started by taking the view that these are basically ordinary 15mm figures, much like the many other ACW's I have painted over the years so I could approach them in the same way. I quickly realised that it was not going to work and that I had to re think and start again with the Warlord concept of the Epic theme and what they are trying to do here. Taking a step back and looking at the strips of figures I realised that they are actually far more like 6mm strips in terms of production than conventional 15mm ranges, this was important because it completely changed my perception of what I could realistically hope to achieve with them. My 6mm 'speed painting' method has been tried and tested over many years and thousands of figures with the key being to add dots and dashes of strong paint, that is to say selected shades that cover in a single application over a very flat black base coat leaving some of  that black showing to represent areas of shade.

Having carefully selected my range of colours and the order of application I then asked myself what I wanted to achieve in terms of the overall look and finish of each base of 20 figures, units that reflected as accurately as possible the appearance of Civil War units, without painting levels of detail that would simply be lost when viewing at arms length. That said I still want the figures to stand a little close scrutiny but without being overly fussy. For me the key is a good choice of brushes that will hold a good point, pick up a blob of paint and apply it accurately and at speed exactly where I want it. These figures have been painted using an Army Painter size 00 for everything aside from the faces where a OOOO is used and the green bases where a size 2 is used.

Lets have a bash through a couple of strips to see how this works. First stage I take Vallejo (all vallejo) Flat Earth which is my go to 'Butternut' shade ( and yes I know it varied wildly but I'm trying to keep things simple here). You can see I'm picking out spots to apply the paint but leaving plenty of black showing. First image shows the first application completed. Next London Grey is used in the same way to give the impression of a unit in a mix of uniform, with just a few trousers here and there picked out with Azure Blue. This was done very quickly trying to avoid painting over anything else. Then Flat Brown is applied to the musket butts and along the rear of the stocks. Here and there I apply a touch of brown to beards, some rear cartridge boxes and a few belts before taking up my Flat Flesh and the 0000 brush with which I blob the hands and apply fine dashes to the faces. In any other scale I would begin with light brown for my faces but for these I just went with the straight flesh as you can see. Next with a silver/steel mix I run down the barrels (back to the 00 brush for this) and the officers sword etc. I then add the odd touch of Flat Red for a bit of contrast to a couple of blanket rolls, the drum etc, because it just slightly lifts the overall look. Finally I add some very fine lines of off white to represent bread bag straps etc, not to all the figures just to a few and it's job done!

I COULD of course now add highlights to the 'Butternut' and the Grey, but honestly in this scale I really don't think there is much point as the sheer number of figures per unit  is what gives the visual impact. I do however use my favourite Satin varnish which gives a bit of 'pop' without the effort of highlighting. this is just personal choice.

Basing is very quick and simple, PVA covered before picking up a strip and after a running small amount of glue along the raised edges pop it into the locating pegs. I then scatter my extra fine Javis granite mix before shaking and blowing off the excess. Once dry a few patches of 2mm summer grass are applied and the bare stone areas treated with Sepia wash which will subsequently be drybrushed with Buff.

And that's about it! Not perfect but I think it works for this Epic theme, if you look closely you will see plenty of black shade areas showing through but this is very much a part of the look I want to achieve.

Now all that remains is to paint the other two and a half thousand figures when they arrive!

Warlord Epic ACW's 60 test figures painted in around 3 1/2 hours, roughly 20 figures in just over the hour and that's with constant glances at Match of The Day! Plus of course basing time. I painted just two strips at a session using the 8 basic colours outlined above. Not great if you view the images blown up big, but in real scale they don't look too shabby I think? 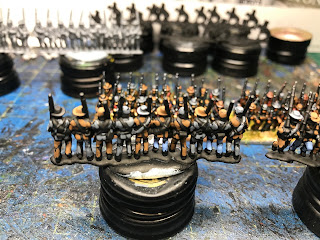 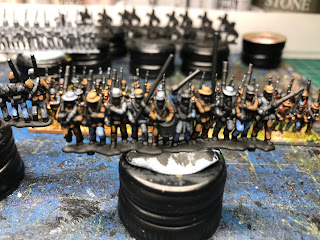 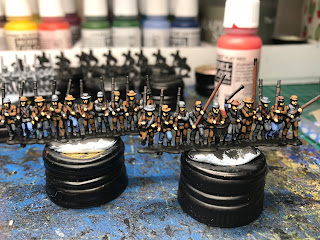 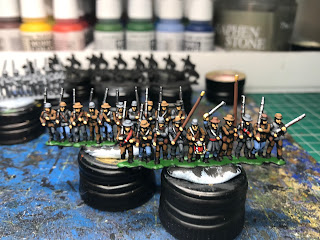 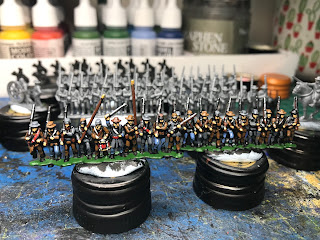 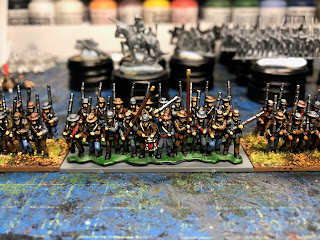 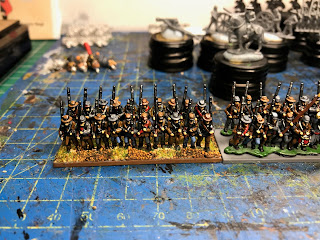 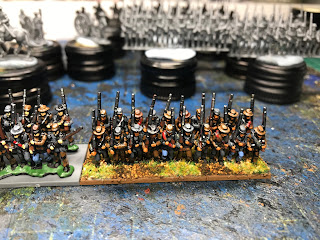 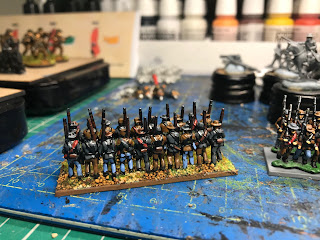