PLUTO bungalows Greatstone, fuel for the Allied invasion of France 1944.


Bolt Action continues apace, and in time I will add Russians. My Germans will expand to take in both 'Normandy 1944' and the 'Last Levy 1945' lists, the latter incorporating Volkssturm & Hitler Youth squads. Both lists allow me to take a StuG or Tiger I, with the latter having severe fuel supply issues if used in 1945, as was indeed the case, requiring a dice throw after each movement turn to check fuel supply.

On the subject of tanks I now have all seven plastic tanks assembled, and the resin Tiger on the workbench. Following these I'll focus on infantry squads as I'll need at least four per side to complete the lists, plus artillery.

As you also see I'm also building new 28mm scale MDF buildings to replace the 15mm versions, starting with a damaged pair of shops, it's bloody HUGE, but will look so much better with my model tanks etc. I was reluctant to do this, but know it will be worth the effort in the long run. 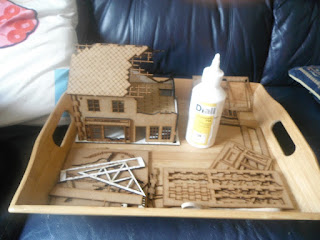 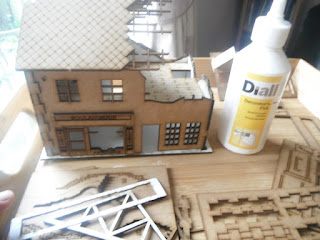 PLUTO bungalows, Greatstone Beach.
On the subject of wartime fuel supplies I happened to pass these yesterday, a few miles down the coast, and was telling my wife the history of the wartime Pipeline Under The Ocean that supplied the fuel to support the D Day landings, and how these bungalows were built as 'dummies' to house the pumping stations and crews. There is also a single concrete section of Mulberry harbour visible off Greatstone that broke free and sank before it could be towed across the channel.