Some may recall my only previous attempt at doing something in 2mm scale (here). While I did give up that particular project and passed it on to JBM who took it to another level I have continued to eye up the pages of the Facebook 2mm scale wargaming group. A couple of weeks or so ago I had a idea, why not make playing pieces featuring 2mm scale Irregular Miniatures blocks for use on the Commands & Colors Napoleonics board? So I placed an order to see what might be done and the initial results are as you see below. I THINK I'm happy so far, just wondering if I should build up the bases a little more to disguise the unit bases and to blend everything in a bit more but I'm going to avoid the usual grit and static grass because I want them to match the game board. A coat of satin varnish has been added to the entire base to give a semi shiny finish that I quite like.

These are of course British units, 4 'block' line infantry, 3 block Rifles, 3 block heavy cavalry and 3 block foot artillery. Today I'm going to do some French bases and meanwhile I have loads more on order plus more of the 25mm x 40mm bases from Warbases. I have added some 10mm discs to the order to see how they function as loss markers that could sit on the rear of the unit base. While I intend to play the game straight as it is this time - including Command and Tactician cards - on the board I just might make up clump foliage wood bases and possibly BUA bases using the metal 2mm buildings from Small Scale Scenery so a couple of packs of 55mm hexes are also on order. I doubt I want to go any further than this to start with although I have made 5mm hill hexes from foamboard that the terrain hex sits on top of, mainly to give a better impression where line of sight is blocked by raised ground.

If this all goes to plan then there is the possibility of Spanish/Russian/ Prussian and Austrian armies for use with all the expansions that I have, it would potentially offer me endless scenarios both official and unofficial playing the only wargame that I truly enjoy these days.

So what do you think I should do with the basing? 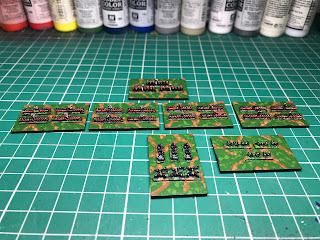 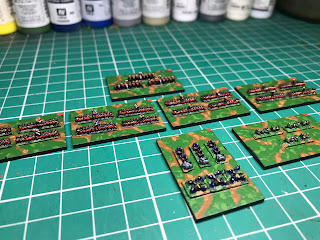 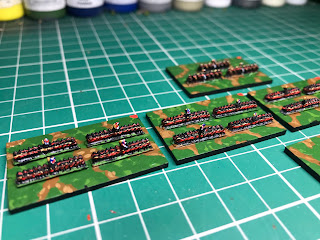 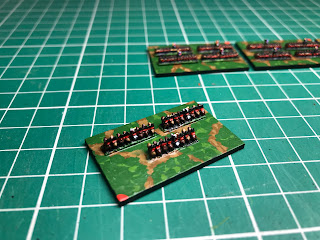 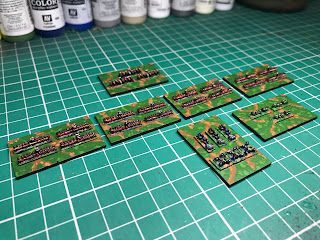 Below: infantry in square marker to replace the card token. 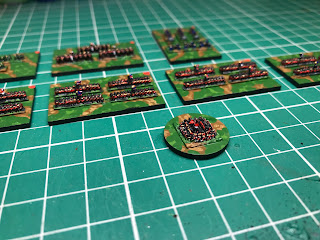 EDIT: The first of the French units painted this morning in no time! Waiting on bases. All drybrushed over flat black undercoat, 3 colours blue jackets, sky grey trousers and (with a very fine brush, in this case the Psycho) sunny flesh picking out the faces. I went a step further by adding a few dots of red and yellow to the tops of the flank companies which I think has lifted them. The cavalry are Dragoons so green coats and a touch of gold to represent the brass helmets - 4 blocks for the French cavalry in C&C. 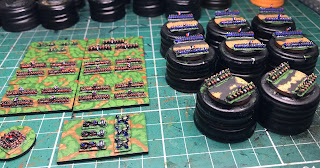 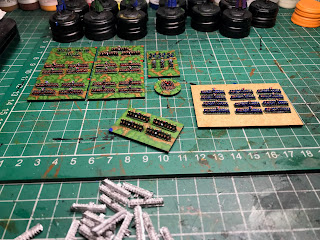 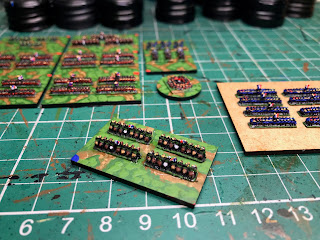 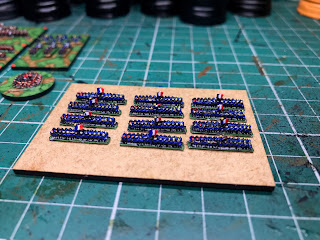 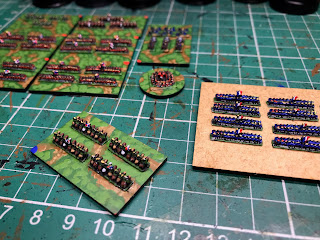