I have now completed three Portuguese units, two line battalions and a battalion of Cacadores. Made an error in giving the line battalions 2 flags each, but I'll sort that out once I get round to painting a couple more units later. For the Cacadores base I decided to go with half the battalion in close order and the rest in skirmish order, maybe I should have left off the mounted officer, he reminds me more of an ACW General!

As I was clearing the table ready to repaint the room, I took a couple of pics of both armies so far, I'm pleased with the progress in such a short space of time. I need to paint up another three French battalions to balance up the numbers, so I will knock them off before starting work on the planned 'square' bases.

Forward thinking.
Having reached this stage I'm planning for the future. A somewhat alarming idea went through my head the other day, I will share it with you. I think it was Simon who suggested some time back that the game would work well using actual battalion bases as individual 'blocks', that is to say instead of having '4' blocks marked on the bases I could use 4 actual bases on a much larger grid scheme for really big battles. With the anniversary of Waterloo just 3 years away, and with many gamers planning special projects, such a game could potentially be a great visual spectacle, and given the speed with which I can paint these bases it would not be an impossible goal by any means. There is even a 'Commands & Colors' scenario for the battle and all of the troop types are available from Baccus. For me, to have such a long term project to work towards would be a good focus. I am giving this some serious thought! What do you think?

Terrain.
I am waiting for some more scenics to arrive before I begin work on improving the overall look of my terrain board. I have made more hill hexes and a few more 'wood' bases. As I wanted to avoid thick edges on my terrain items I found a good way of making very thin hex sections by coating a plastic hex with clear flexible glue, sprinkling with my mix of fine grit and 'earth' foundation flock and then leaving to dry overnight before peeling it off next day (see pic). The result is a flexible hex that can be laid flat of the table with no discernible edge and can be landscaped to taste. I think they break up the bare mat nicely and I have more planned. I now have river sections cut from thin plastic and these should be finished in a few days time. 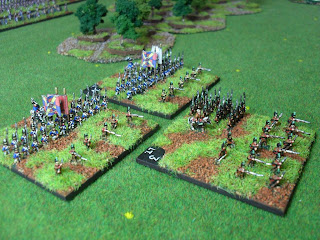 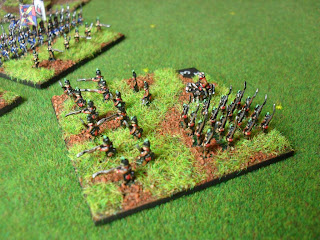 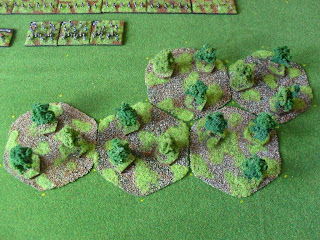 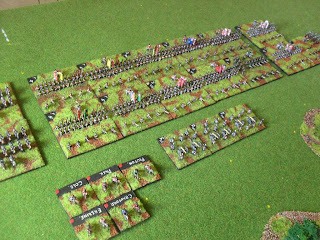 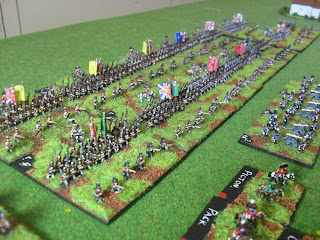 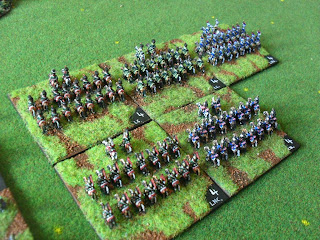 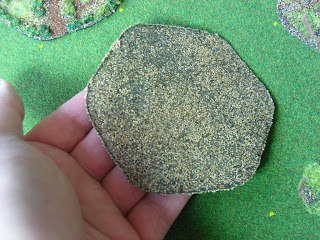 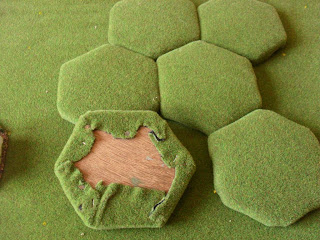 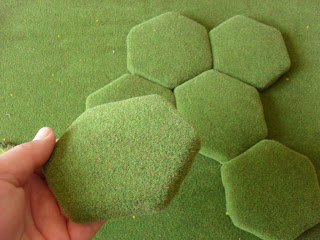