Having confirmed that both British Light Dragoon regiments are indeed moved to contact before resolving melee unit by unit  (players choice) I can now complete British move 6. This was interesting as it featured both a cavalry 'breakthrough' move following combat and the 'Bonus attack' move as explained below.
Note: The images below have been wrongly move numbered in their captions! This is move 6 and 7 NOT 7 & 8! the main post text is correct, the images are the correct images but the move numbers are wrong! I apologise for the error. This post only, all others are correct - I will correct them later.


British move 6 - 'Cavalry charge' charge has been played and both Light Dragoon units have charged a regiment of Cuirassiers. The British heavy dragoon regiment remains in reserve in the centre on the British baseline.

1st melee - selected LD unit throws 3 dice (3blocks for British cavalry). scores 1 'hit' and 2 'flags'. Cuirassiers can ignore 1flag (retreat), but choose to retreat 2 hexes with 1 block lost. The triumphant LD's get a 'Breakthrough' move bonus of 1 hex and may then make a 'bonus attack' if they choose. (This only applies to cavalry). They use this bonus (1hex and may battle) to attack the raw conscript battalion who fail to form square (OK, so I totally forgot! Infantry attacked by cavalry have the choice of forming square of course Doh!... but lets assume nerves got the better of them on this occasion!). The dragoons throw 3 dice and score 1'flag' 1'sabre' and a miss. 'Militia' ( as the rules rate them) always retreat 3 hexes on a 'flag' roll, but they have an attached commander who can reduce this by 1 hex). However, the 'sabre' roll means that an attached leader must roll to see if he becomes a casualty, 2 dice and he escapes injury luckily. The battered battalion beat a hasty retreat and the commander elects to use the full 3 hex move to the rear and to comparative safety. 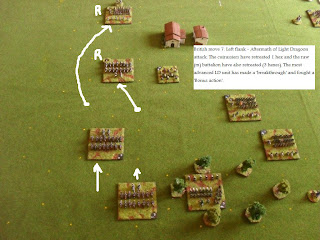 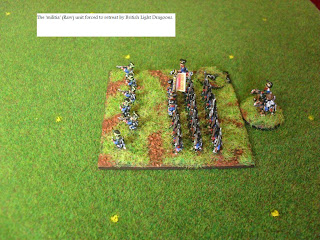 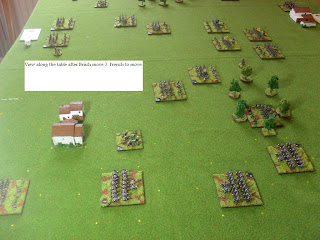 The French right is being driven back, although the cuirassiers are still in good shape. 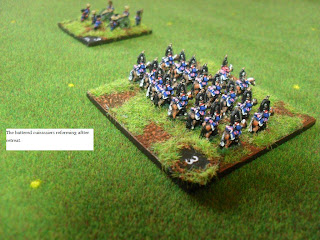 Replace card and re draw.

French move 7. - 'Attack centre' card is played. order 3 units in centre. French commander makes an aggressive attack along the front, 1 line battalion advances onto a hex occupied by a detached British commander. Another battalion attacks a British battalion to its front and finally the elite battalion of converged Grenadiers is ordered up from its reserve position and begins its advance. 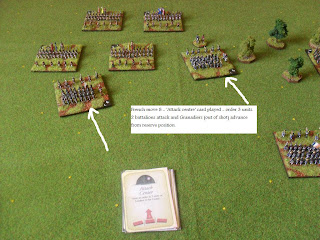 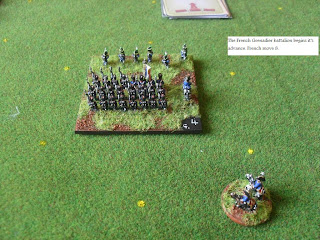 There are 2 melees to fight: French column v British line, the British battalion has already lost 2 blocks, and this time suffers a further 2 hits. It is immediately sent streaming to the rear in rout (eliminated), and the French battalion take 1 Victory Banner.

Second combat is the other attacking column who contact the poor detached British commander in the centre. 4 dice produces 2 'sabres' so the commander is killed and removed from the field. Another Victory Banner is awarded. (eliminating units or leaders = 1 VB). The French now have 4 VB's, just one short of the target for a victory. (This varies game to game/scenario to scenario) 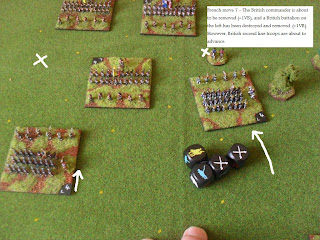 This has been a good move for the French. Replace card and redraw.


British move 7. - Calls for desperate action as the centre is under pressure. A quick look through the 5 possible command cards and the ' 'Bayonet charge' card is played. order 4 infantry units. 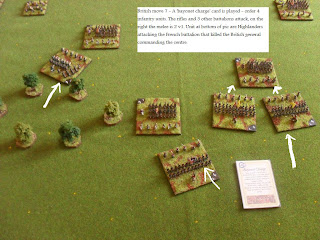 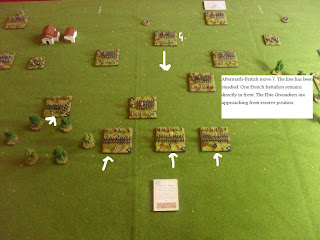 1. The rifles throw 3 dice for its 3 blocks and force the French to retreat 1hex. The rifles hold their ground.

2.The Highlanders throw 4 dice and also force their opponents to retreat 1 hex. They choose to 'take ground' which brings them into line with the rifles on their left and the 2 battalion to their right,  steadying the British front.

3. The attack by the first of the two battalions scores 1 hit. There is an unsuccessful 'battle back' before the second battalion inflicts further losses and forces a retreat. The French battalion has been reduced to a single block (marked '1'). The British centre has been saved from collapse. 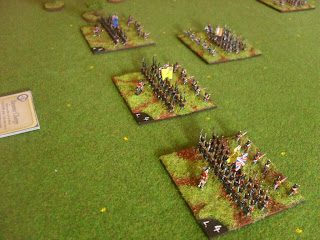 Replace card and redraw - a very useful 'Give them the cold steel' card comes up!


French move 8 - The French are only 1 VB from victory and play the 'Cavalry charge' card. All 3 French cavalry units will go on the attack. To follow. 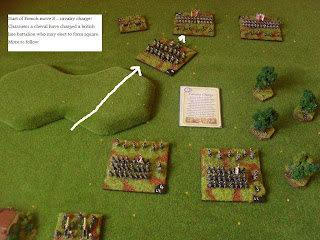 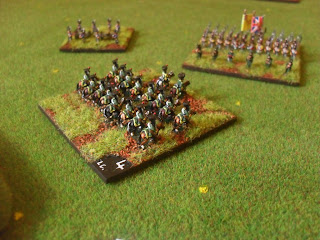