The discovery of the fact that the entire old Hinchliffe range of 25mm figures is still very much available has completely changed the way I feel about 'modern' wargame figures. Over the past few weeks I have been working enthusiastically on building up my Hinchliffe ECW armies, and was lucky enough to discover a rich vein of painted figures on sale via Ian Hinds (Hinds Figures Ltd). Among the thousands of painted figures I hit upon a number of units that were clearly painted by the same talented hand, some featuring beautiful hand painted flags and conversions, they were reasonably priced and so I set about acquiring as many as I could afford. They were a revelation, they arrived looking as though they had been stored for years and were all in need of a good clean, but what emerged from the grime were really well painted figures with some fine detail work. I'm still working through cleaning, touching up chipped paint and re basing, but I find myself the very proud owner of over 400 painted Hinchliffe figures of which 160 are cavalry. I have around another 100 castings that will enable me to finish this project, mostly by adding more Foot. These will of course continue to feature on my ECW blog. 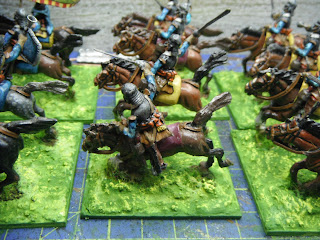 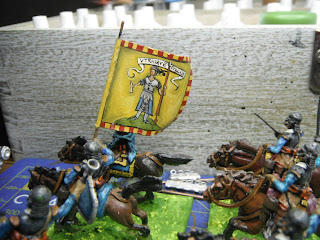 As a consequence I have been casting around for what to follow this up with, my enthusiasm for painting model soldiers being as high as it's ever been. Followers of this blog may recall attempts to start new projects over the last couple of years have mostly ended in dismal lack of enthusiasm, Warlord Ancients & ECW's followed by Renegade ACW's for example. I'm now convinced that the chunky style of the '28mm' figures has lost all appeal to me, and that I no longer have the patience to glue together multi part plastic figures, and whilst I can appreciate that they produce finely detailed, very historically accurate results, there is something about the elegance of the simple 90p Hinchliffe 'true' 25mm casting that I enjoy painting and collecting. Bearing in mind that these figures were sculpted by Peter Gilder in 1978, they have stood the test of time very well and Ian Hinds has been committed to restoring the range to top notch quality, re moulding the ECW range among others and is currently I understand working on the Napoleonics.

As mentioned above I wanted to do the ACW again as it's an old favourite of mine, but the Renegade figures I ordered simply did not work for me, they were expensive at £1.25 per figure, but more than that the poses were very limited and I thought them quite stiff, with marching arms straight down the side of the body and no variety in leg poses, the faces were very good indeed, but again little contrast and too many heavily bearded chaps for my liking among the ranks. I painted 18 of them and then found myself quite bored with them! I still have them, but they will go on eBay when I begin my planned clear out. However, the Hinchliffe ACW range still looks great to my eyes and having spent some time thinking things through this is going to be my next project. Of course I have been looking back at old photos of the Gilder collection and the tight packed ranks of these slim elegant castings has proven to be more than I can resist.


The classic 'Yank' advancing (code ACW1), as seen in the above image, (from the Hinds Figures website). 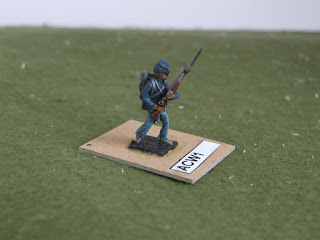 Ready for action, US 2nd Armoured Division attack from the left. 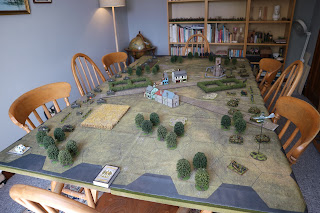 It struck me the other day that if I used the 6" hex 'Commands & Colors' printed matt bought some time back I could actually play a game of Memoir '44 using my 15mm Flames of war collection. I retain a fondness for the board game, but never really enjoyed using the plastic parts supplied. I did play a game on the board using 15mm figures and tanks but it was far too cramped and simply did not feel right. So this could be the perfect solution, the mat is 13 x 9 hexes so it's standard memoir size and when laid out occupies an area of 7' long by 4 ' wide which gives a nice feel to a WW2 game in 15mm scale. The table once laid up with terrain looks as below. For some reason these pics do not accurately reflect the green of the mat, I will try to improve things for the battle, but they show the layout. I think for a grid based game it looks pretty conventional, especially when you stand back a couple of feet or so. 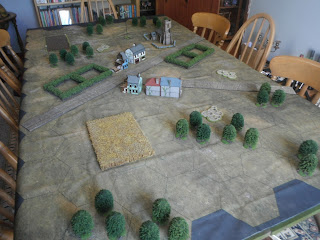 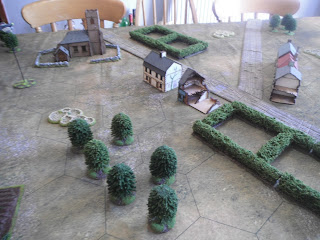 One shot with the flash turned on..... but still not great! 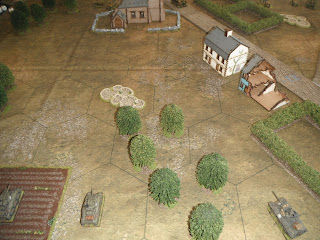 The game is going to be played to standard Memoir rules but with the following tweaks as I have used previously.

The game will be a basic encounter with both sides starting deployed on table on the first or second line of hexes. Victory is gained by taking 4 'clear' victory medals or by capturing the enemy HQ (moving onto that hex). This means for example the game could run to 10/6 or more, or indeed be won at 4/0, again we shall see how this idea plays out.

The forces are as follows: 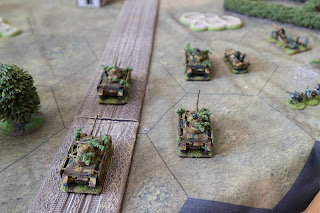 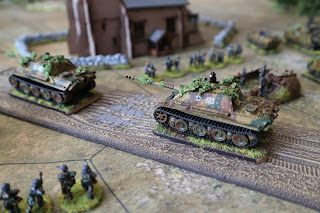 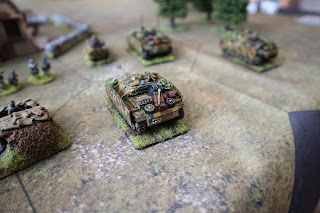 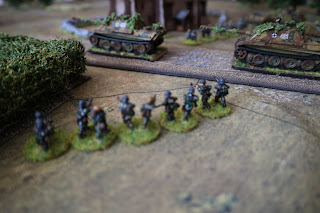 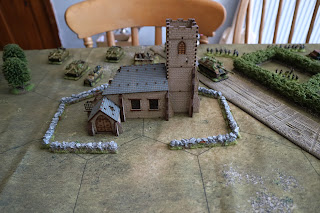 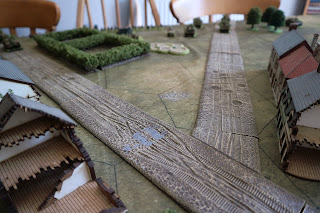 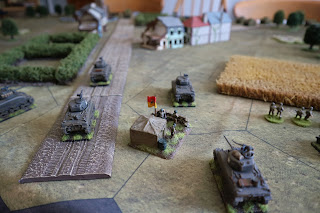 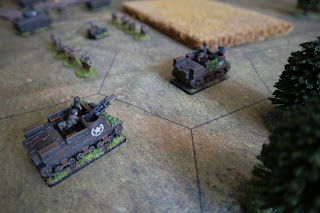 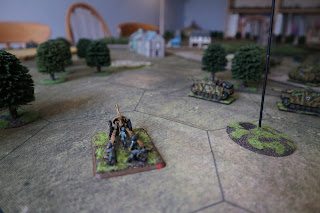 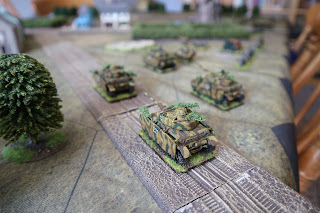 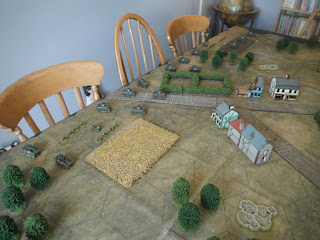 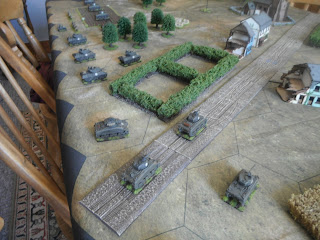 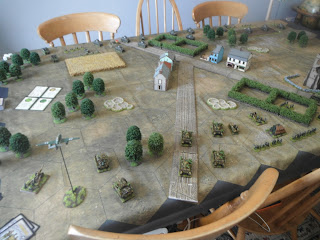 A couple of shots of the relevant terrain and troop cards supplied for quick reference, and a shot showing the six faces of each dice for those unfamiliar with Memoir '44. You can see that I have placed 2 areas covering 4 hexes of the dreaded 'Bocage' (see 'hedgerow' terrain card below for how this plays, it can certainly bog things down. Each building is treated as per the 'Towns and villages' card below, the church occupies 2 hexes - how could I leave it out! - each hex counting as an individual BUA. 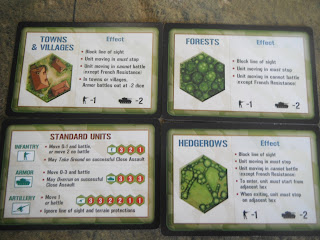 Should give a lively game I think. IN addition both sides will have air support if and when the 'Air Strike' card is drawn as per the rules. It is late Summer of 1944 and the Germans are fighting to hold back the Allied advance, US 2nd Armoured Division is advancing in force supported by infantry but the Germans are in good shape, the infantry being veterans for the most part with a smattering of young  recruits from the Hitlerjugend, armed with close quarter anti tank weapons capable of burning through a Sherman or M10 at close range.

EDIT: I changed camera for the last few shots above, borrowed my daughters Cannon, much better than mine so took a few pics of the ECW's sitting on the bookshelf in the background, nice and sharp, all Hinchliffe from Hinds Figures as featured on my other blog! 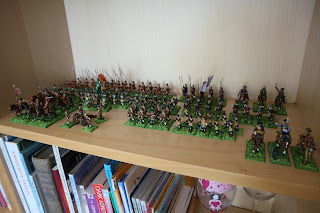 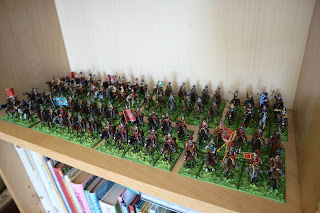 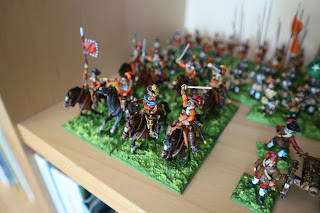 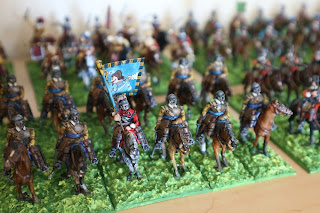 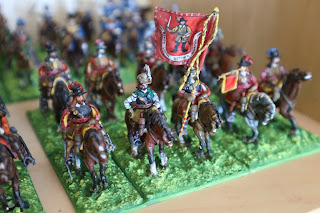 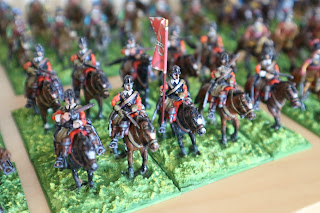 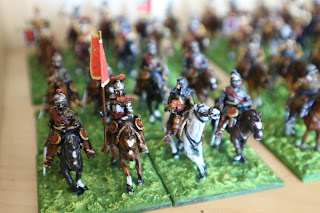 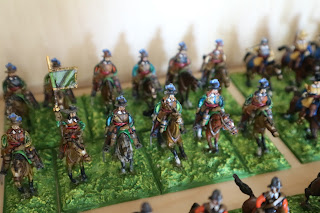