I wrote up the previous post last night. This morning I played a few more moves. Interestingly Steve posted a comment regarding the impact of'facings' on a game, and I myself was wondering about this issue in C&C. A couple of issues come to mind when playing C&C 'non hex':


In short I am less convinced now of using DU's than I was last night! Once you get into close combat with units attacking, retreating, employing combined arms combat and carefully positioning your generals the advantages of hexes become more apparent.

Conclusion.
I'm glad I tried it for myself. In the early move stages it is not a problem, but becomes an issue as the game develops. The 'feel' of the game is not the same as 'pure' C&C, probably goes without saying, but it feels a completely different game. It is now clear to me that I must now seek to find a way of building realistic terrain but incorporating a hex grid somehow. My conclusion therefore is to stick with the rules as they are - I love the way they play - and put aside any thoughts of non hex.

May as well add a few more pics to keep the blog lively! Some of the cavalry action. 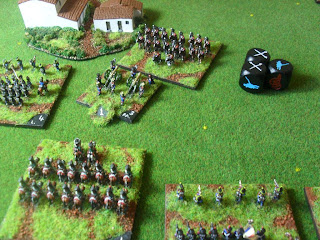 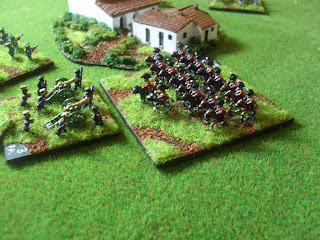 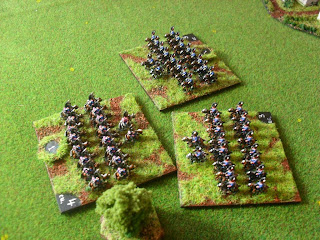