A French victory - and some thoughts on the rules.

On French turn 8 the cuirassiers crashed into the leading British Light Dragoon unit and routed (eliminated) them. This earned them the 5th Victory Banner and a win for the French. I played on a bit longer, they made a 'breakthrough' move which carried them into the second LD unit and the chance for a 'bonus attack'. The second unit were forced to retreat (1 flag roll) and the cuirassiers again gained ground.

On the left flank a battalion of British light infanrty elected to form square when attacked by a regiment of Chasseur a cheval (I wanted to run through the square sequence this game). Infantry in square get to battle first against the active player and throw 1 dice (squares only ever throw a single dice). No hit scored so the Chassuers attack the square throwing 4 dice (edit* should be 1 dice only cav v square!) 1 flag is scored which usually forces a 1 hex retreat, but as squares do not retreat in CCN they instead lose 1 block.

All along the centre the British were under pressure now and with losses of 1 leader, 1 battery, 3 infantry battalions and a regiment of light dragoons I decide to call it a day on this first test game. Writing it all up step by step and captioning the photos etc has proved hard going so battle number 2 will be a more typical AAR with photos. It has been a useful exercise for me and I have made a couple of errors as expected. A throw of 'sabre' inflicts a hit in combat on any unit, not just leaders as I played it. Also an attached general reduced any retreat by 1 'flag' and not one hex, that is to say the unit can ignore 1 'flag' roll.

All in all it flew along and I have commited much to memory I think. The reference sheets pinned to the wall were VERY useful indeed, really well laid out and saved a lot of time looking up basic information such as how many dice to roll in any given situation. These can be downloaded from the links I gave a few posts back.

Its a bit odd at first when a base is simply 'eliminated' and removed from the table. I like to think more in terms of them having been totally routed beyond rallying, so I tend to use the term 'routed' which sounds more conventional. Units that are forced to retreat can of course be steadied by a general. There is no need to keep track of rout moves etc and this really speeds the game up. No record keeping is required at all and my little markers placed on the rear of the bases worked well and were discreet.

I need to work on 'combined arms' attacks more as I'm sure there is more scope for artillery in support of artillery attacks in there. The next game should be better.

In short, I LOVE C&C N, they are just so incredibly playable and real fun, but I still had the feeling of being in command, of having to think about where to move next, watching both flanks, trying to develop my artillery, place generals where they are most useful etc. I'm glad I made the decision to try these.

Final pics of the test game - I have not captioned these!

Battalion forms square (marker) in response to a cavalry charge. 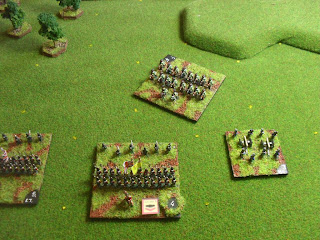 Overview showing how the lines became broken as losses mounted. 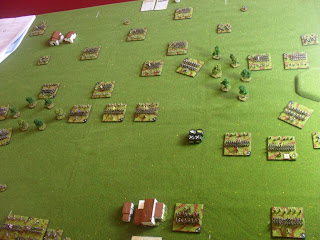 Situation at the end of the game. 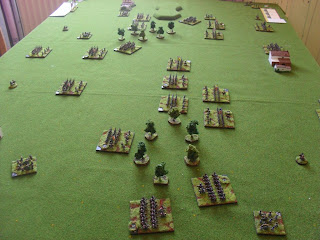 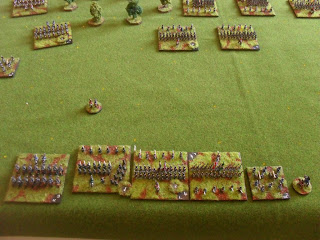 The 'square tracker' with one card removed from hand and placed face down. 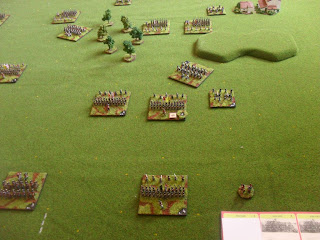 A Swiss battalion reduced to a measly 1 block, they fought well. 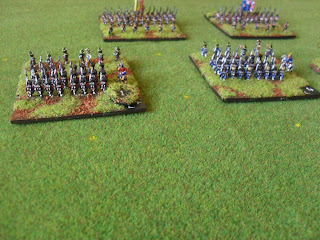