As it seemed obvious there was going to be some melees in this round I decided to work through it today. I'll probably do a bit of painting tomorrow, but any moves I do fight will be added in a couple of days time or so. This is actually only the French 6th move as I wanted to check the rules out before I complete British move 6 (see below). I find writing up stage by stage is a good way for me to quickly learn and retain the rules.


French move 6. - 'Bayonet charge' card played - order 4 infantry units. The French commander in the centre orders 4 line battalions to attack.  2 attack one British battalion and another two attack a battery of foot artillery. On this action card all infantry may move 2hexes and still battle.

1. First french column attacks, and throws 5 dice ( 4 blocks +1 for French LI v inf). 3 hits are scored, no flags, so enemy battalion is reduced to 1 block. It can still 'battle back', throwing 1 dice and scoring 1 hit.
2.Second French column now battles the reduced battalion, 5 dice scores 2 hits. The battalion is effectively eliminated from the game and the French collect a first Victory Banner. The victorious French battalion 'takes ground' and advances onto the abandoned hex (players choice, attackers only and does not apply to artillery). 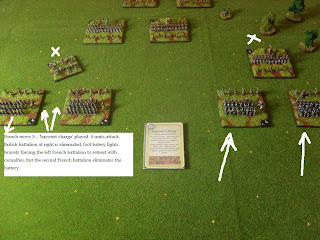 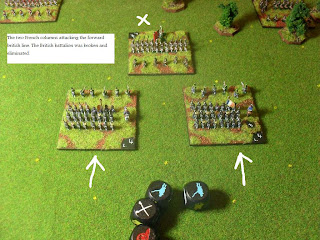 3. Now the bayonet attack on the battery is resolved.  The first column attacks, throwing 4 dice and scoring 2 hits (artillery reduced to 1 block but still very effective in 'battle back). The artillery battles back with 3 dice for the single block ( I'm assuming this represent close range cannister fire), and scores 1 hit and 1 flag, causing the French battalion to retreat 1 hex. However, the second French battalion now attacks, throwing 4 dice and scoring 1 hit, eliminating the battery and earning a second Victory Banner. The victorious battalion declines to take ground as it will be unsupported. 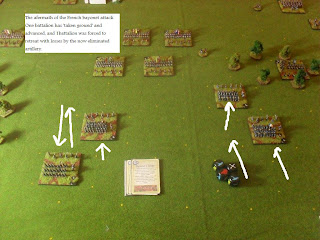 Card is returned to pack and new card drawn.

British move 6. The British centre is under pressure but still well supported with reserves. So seeing an opportunity on the left flank a 'Cavalry charge' card is played. 2 regiments of light dragoons are ordered to charge the single French heavy cavalry unit to their front. Both units are advanced as shown in the image to begin combat. However, I want to clarify one thing before I proceed.
Question - when 2 units attack a single unit as in this case (and the previous move) is it correct to move both attacking units to contact before choosing which to resolve melee with first or should I move 1 unit, resolve the melee, then move the second unit? I think I am correct in moving both to contact as movement precedes combat. Once I'm clear on this I'll fight the melee and conclude move 6. 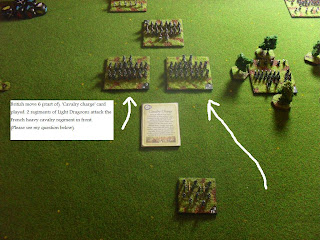