Following on from my previous post I decided to have a full run through of a Command & Colours game ignoring the hex grid this time. I should stress that I find no problem with the hex game whatsoever, but I really want to play my games on fully landscaped terrain in the longer term so I need to find out how practical the concept of exchanging hexes for standard Distant Units (of 1 hex width) will be. I placed everything on the table again, this time the bases formed up in slightly closer order. I played through the first 8 moves per side, mostly developing the units and initial combats. C&C flows fast and furious, no doubt about that, the initial maneuvering that can be frustratingly slow in some rules is genuinely exciting and makes generals think quickly about where best to develop attacks, making sure artillery are well placed to support, and where to order the leader stands to best advantage.

The game, moves 1 to 8.
In this game the French went for a central attack to the left of the broken ground, (not sheep I'm afraid chaps as suggested, they are in fact supposed to be large rocks and scrub!). The British decided to counter this advance, leaving the Guards in reserve, whilst also developing an advance on the right flank towards the wooded hill, with the 95th Rifles leading the way, followed by 2 battalions of Light Infantry. As the French brought up artillery to support the centre a regiment of Heavy Dragoons charged the foremost French battalion, who decided to form square. (One command card placed face down on 'square tracker'). The square rolled just 1 dice with no effect, so the cavalry battled back (1 dice v square), unable to break them. Supporting fire from one of the French batteries which had been brought up forced the brave Dragoons to retreat 2 DU's. With no cavalry to threaten them (within 1 DU), the French battalion came out of square and formed up on the flank of 2 more battalions and a battery of guns. On the British left one of 2 Light Dragoon regiments, supported by a battery of horse artillery moved forward towards the French centre right. This was countered by a regiment of Cuirassiers who charged the Light Dragoons, and despite throwing an extra dice in melee they failed to force them back, allowing them a battle back, which was again ineffective. The British played the 'Fire and Hold' card issuing orders to 2 infantry units and 2 batteries in the centre to open fire ( +1extra dice each). The combined fire sent 2 battalions in the French centre reeling back in retreat with heavy casualties (British line infantry firing throw 1 extra dice, so a standard 4 block battalion in standing ranged combat will throw 5 dice). At this stage no Victory Banners have been won, but with depleted battalions and ranges now closing this will soon change.

So far the game has flowed every bit the same as with the hex grid. Measuring is simple using my trusty DU stick (made of lightweight plastic rod from an old kite to avoid damage to fragile 6mm bayonets), it takes no longer to measure than to count the hexes. Part 2 of the game will follow, and if any anomalies are thrown up during the more intensive combats to follow I will record them here.

Pictures show various stages of the game so far. 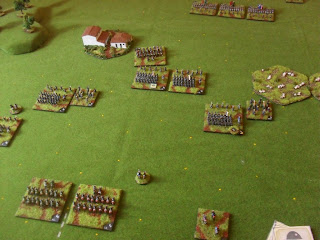 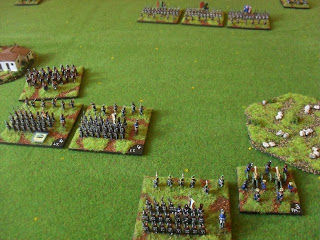 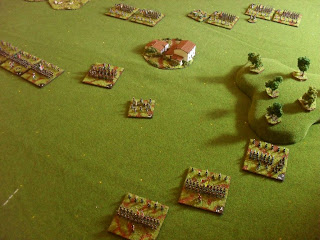 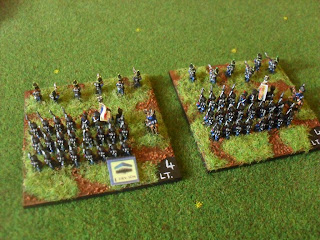 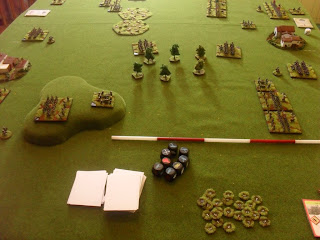 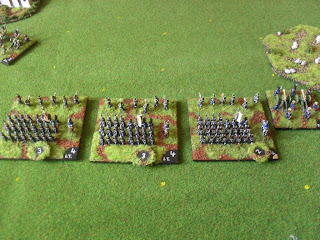 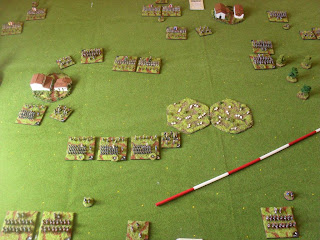 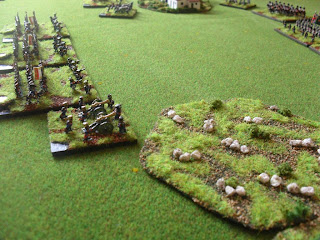