The second base of British line was completed in a single painting session of about 1.5 hrs, including adding the flags (which will get a bit of touching up around the edges), and sticking down and adding the 'earth' base scatter (fine grade grit added to 'foundation dirt flock). The bases are pre cut from Baccus, which again speeds things along.

I'm ready to start my first French 'test' base now. I used a base coat of 'dark flesh' under the British red coats and have been pondering the use of a base coat for the French, but I'm going to try a lighter colour straight over the black undercoat first. One thing I have learned about painting 6mm is that the finished effect is better if using slightly brighter colours on the figures contrasting with darker colours on the bases, at least that's my theory!

I've been reading the Napoleonic Polemos rules, which for those who don't know actually consist of 2 sets aimed at different levels of organisation. Having had a good read through both versions I have decided to work at the 'lower' Divisional level set, but still using the 60x60 bases intended for the 'Corps' level set. It will make no difference to the way the rules play beside keeping in mind that 1 BW = 60cm, while 1BD = 30cm. All measurements are given in Base Widths mainly, with a few in Base Depths (ie, "fall back 1 BD"). So my bases now each represent a single battalion of infantry or a regiment of cavalry. I prefer the look of the square bases. As said before my French battalions will be represented by 24 figures in 3 ranks of 8 to show the deeper formation than the British line. 6 voltiguers will be out in front skirmishing with a mounted officer riding beside the 'column'.

I'm well stocked up with Baccus figures now so 6 weeks solid painting should see 2 full divisions ready to go. The cavalry figures look brilliant. I have looked at the Timecast Spanish buildings range and these are definitely on my near future shopping list.

Back soon with the first French infantry base completed. 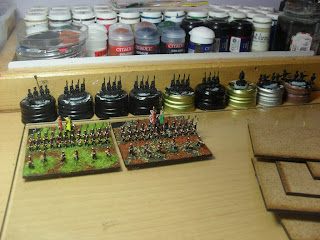 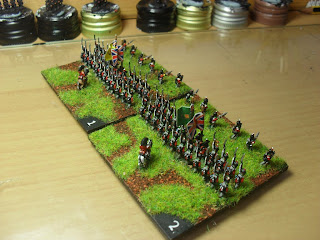 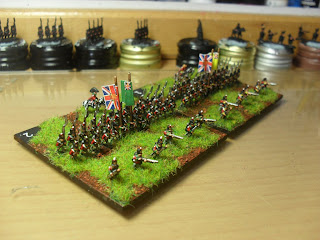 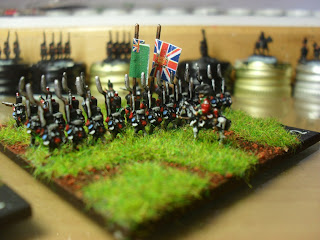