Well, I have taken the plunge and gone to the 'Dark side' of 6mm scale! My first order from Baccus arrived within 3 days and while at first glance the figures did indeed look TINY, at closer inspection I was staggered at the amount of crisp detail these figures have. It's been many years since I last saw 6mm figures and it is clear that casting technology has improved over those years. The main thing that pleased me was that the bayonets are all well defined and no broken ones, as bristling bayonets are essential to the look in this scale. So I set about painting up a test base of British line infantry. As I also got a copy of the Polemos rules I decided to go with the 60mm x 60 mm bases as standard for the 'Marechal d'Empire' set, which cold also be used with a few other sets I have in mind (including 'Napoleonic Squares'. After a lot of thought I decided to have just 30 infantry figures plus a mounted officer on each base. This will allow me to build more bases faster, and I hope the photos show it does not look too bad? British infantry will be 2 ranks of 12 figures, plus 6 flank company guys skirmishing in front, with an officer at rear. I may also add a couple of casualty figures to the rear of each base. French line will have the 24 figures formed in 3 ranks of 8 to represent the deeper formation, plus 6 skirmishing figures and the mounted officer.

I used the same brown on the bases as on the bigger figures (vermin brown), then flocked with GW static grass. I left a small area on the rear corner to paint an identification code which will tie in with a chart on the wall containing full unit details. Overall I'm well pleased with the finished result, and I can imagine that 50 such bases will look quite impressive on the table top. I found that I could paint this full base of figures from start to finish in about 1.5 hours, and thats using a fairly controlled picking out style rather than washes or drybrushing. I'll add a colour by colour painting guide to each new unit as I paint them, for future reference so that I can quickly recall the shades used and order of application.

I hope to produce several bases a week, as well as working on terrain bits and pieces, which looks fun in this scale. Heres a few pics of unit number 1. 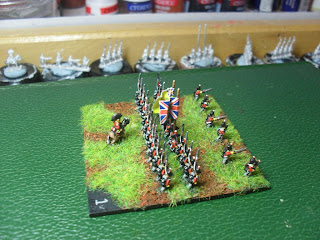 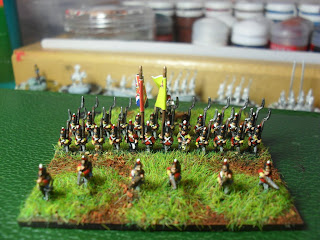 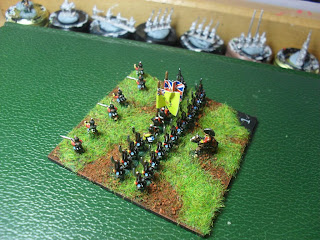 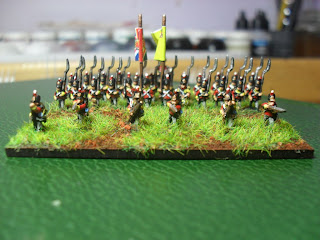