So this is the 'Old Guard' base that luckily I managed to transform into a converged elite battalion of grenadiers upon discovering that the Old Guard did not fight in the Peninsular! Thanks to the knowledge pool that is the TMP Napoleonic discussion forum there is plenty of evidence to support the fact that the bearskin was still being worn by French grenadier companies as late as 1811 at least, and that numerous British eye witnesses mistook these troops for the Old Guard. That'll do for me! Even in this tiny scale I think the base stands out as elite due to the touches of red on the bearskins and shoulders etc. I'm finding that I'm finally using more of the Foundry 'light' shades that I have had for years now, as I always felt these jumped out too much on 28mm figures unless used very sparingly. On 6mm however they seem to work. For example, the mid colour 'yellow' refuses to cover in one stroke of the brush, but the yellow 'light' is thicker and looks perfect to my eye. Same with the red 'light' which works well for highlighting plumes, epaulettes etc. I added a flag as they just look nicer with flags and I refuse to get hung up on such things.

12th Light Dragoons coming next, just the horses to paint later today if I get a chance. Again lovely little castings, you can see the braid on the front of the jackets! Followed by another French line base, a base of Chasseurs a Cheval and more British line. Soon as my Timecast order arrives I'll build a village base and a small own base. I also want to make a couple of hills. Then it's the first Polemos run through game, hopefully within the next couple of weeks. 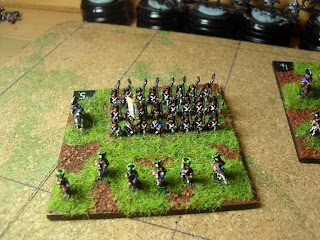 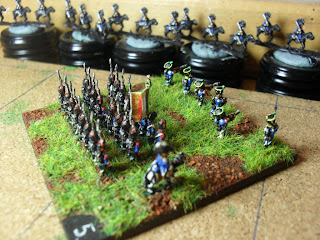 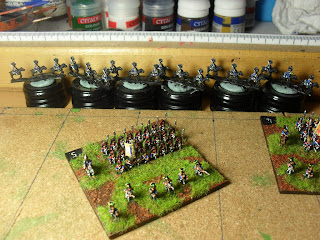 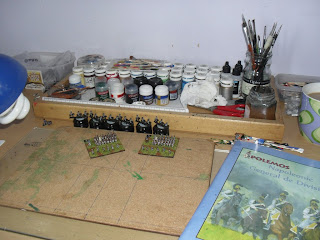 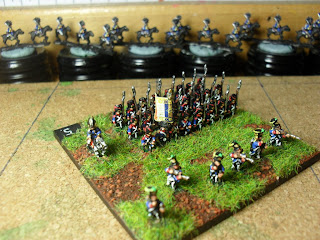