Completed the base of line Chasseur a cheval, 18 figures. Will add a second unit of these later with different facings. I have also just finished my first village base, which will hold 3 of the Time cast Peninsular buildings I'm waiting for. The black patches are where they will be placed. This one has a road running through which matches the roads I started making a few posts back - see here. The next village base will have 4 buildings including a lovely church model, I can't wait for them to arrive. This is an aspect of the hobby I love working on, and lurking in the back of my mind are dark thoughts of heavily landscaped terrain boards in the future. I blame Ian for this! But the potential is huge, something like the 'Siborne' model that I'm sure I saw many years ago at Dover castle.

Coming next is French battalion base number 6, the 4th Swiss regiment. Can't resist them any longer I'm afraid! I'm actually now thinking of removing the large number/letter on those bases and replacing them with a colour code as suggested in Polemos to indicate unit quality and skirmish value instead. I then want a way of representing the changing 'shaken levels' in a way that will not look too out of place, possibly some kind of marker base with a casualty on, not sure yet. On the subject of markers I painted up a couple of brigade command stands, purely for the look of them as Polemos does not represent brigade commanders on the table. I placed them on round bases to indicate that they are just 'markers'. 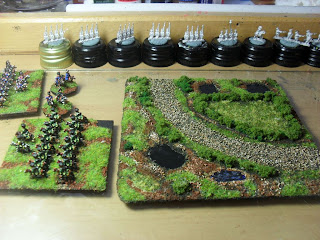 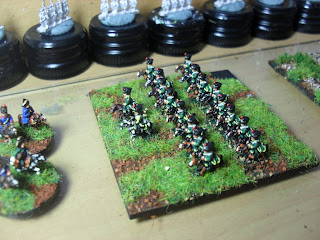 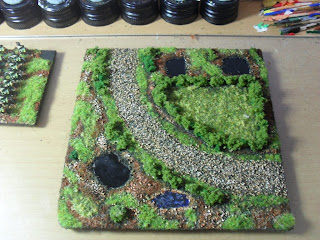 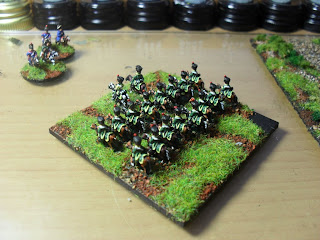 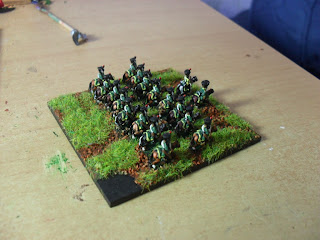