To hex or not to hex?

Recent comments here referring to the 'Dark Side' of wargaming have made me laugh, but also made me think deeply about the issue of grid based games versus conventional games. I recently posted a thread on TMP Napoleonic discussion forum asking for thoughts on grid based systems and was genuinely surprised at how clearly it divided opinion down the middle. One comment was "Why don't you just buy yourself a boardgame?" and made a flippant comment about "OCD rules". Clearly his guy was missing the point, that for me a game without hundreds of carefully painted figures, even if they are just 6mm tall would never be satisfying enough visually. However, I have always liked boardgame style rules, and that I think is my dilemma.

Yesterday during my Psychotherapy session I spoke about my blog and how much pleasure I derive from painting model soldiers. The 'therapy' aspect of this blog remains a serious focus for me. Filling my head with comparisons of various rule mechanisms and the direction I wish to take is also very therapeutic oddly enough I find, I think possibly because it blocks out so much of the 'negative' stuff which overwhelmed me last year, and at last my brain is able once again to 'file' and to retain much of this stuff as it once used to. This is a very good thing for me.

So to the point of this post, having spent a couple of days experimenting with various hex sizes and having made up a very nice accurate template a rather heretical thought occurred to me and I'd like to throw it out there so to speak for some feedback. I am now committed to 'Commands and Colours' as I have said. That's decision 1 made. So far so good. But do I REALLY need my table to be marked out in hexes to use them? If we take a hex to be a standard measurement on a tabletop to which all of the game mechanisms conform then why could not the adoption of a standard 'Distance Unit' work the same? If one of my hexes is 80mm then why could not I use 80mm as a standard 'DU' to play C&C? Instead of advancing a unit say 2 hexes, why not 2 DU's representing the same scale/distance? Apply this to shooting ranges/ command radius/movement etc and what is the difference?  OK so there is the question of 'angles' or arcs of fire, but again could this not also be a simple template representing the arcs of fire as indicated by a hex? I have racking by brain (such as it is!), and I honestly can't see why this should not be workable. I have been back through the rule book yet again, this time thinking in terms of DU's and I still can't see why not. Of course the table would still need to conform to overall size and width by length ratio and also be divided into the 3 sections on left flank, right flank and centre. Terrain items would need to scaled correctly to represent an area that ties in with the DU measurement, but that's easily done. If we look at the examples shown below for instance why should they not work the same without the grid?

So is this proposal workable or is it doomed go failure? Is it utter madness? possibly, but to quote Harry Hill, "there's only one way to find out ..... fight!" I plan to set up a game and play through using the 80mm DU and see how it goes. if it all goes pear shaped then I will simply take my hex template and mark them out, nothing lost besides a little egg on my face.

The next post WILL feature the opening moves of this planned test game, hopefully early next week with a full write up. I hope to paint a couple of Portuguese infantry battalions before then as well as adding the additional artillery batteries I previously mentioned.

I will now put on my tin helmet and await your comments!

*Edit* Using miniatures instead of blocks in C&C is simply a matter of marking my battalion bases with the number of 'blocks' it represents, ie 4 blocks for a typical battalion, 3 for a battery. I can then place a small marker on the rear of a base to represent losses. Note: the base below is still marked up for Polemos. 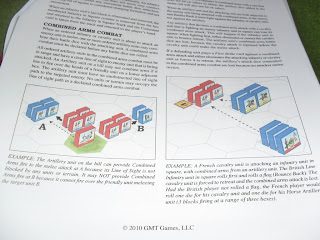 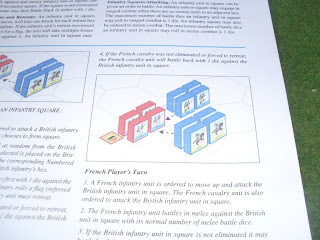 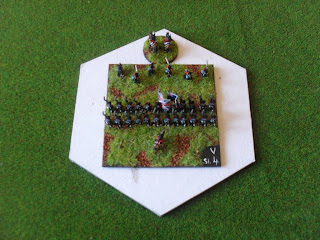