Getting ready for C&C.

Having spent a couple of days working through the mechanics of Command & Colours on the tabletop without the hex grid and reading as much as possible around the web by experienced players I have come to the conclusion that in order to remain as faithful as possible to what is after all a very well established game system I need to go with a hex grid. I can see that it would be possible to use the rules without a grid, but it does throw up some anomalies around terrain and correct movement as well as establishing contact zones for combat. I have looked at loads of images now of CCN games and clearly the use of hex 'points' only is a good compromise and this is what I plan to do. This is going to take time and patience to get right but I think it will be worth doing. Once that is done next step will be to create hex bases for my buildings, with the buildings being freestanding so they can be removed when a hex is occupied. That should be straightforward. Some hex hill systems will also be made up. I hope to get all of this done over the course of the next few days or so with a battle to follow next week...... finally!

'Bits and bobs'
Thanks to the generosity of 'MSFoy' I now have a fine set of wooden dice for CCN, and very handsome objects they are too. I am slightly odd myself about such things and the plastic dice as supplied with the box game did look rather cheap and nasty while of course perfectly functional. I have also produced a more suitably scaled set of command cards that are much more in scale with 6mm figure bases and small table. I think they are about half size.

Another thing I am working on is a set of 'Victory banners' which are printed flags from 'Warflag' based and suitably colour coded with red/blue poles. Yes, I know it is a very nerdy thing to do, but I really like this aspect of the rules and thought it would be fun to have miniature colours rather than card markers. I will do some Portuguese VB's once I have finished the British and French set. My aim now is to produce armies based on the number of counters provided in the game so that I can play any of the scenarios in due course.

Last of my 'bits and bobs' is my old wooden box which will house the cards, markers, dice and VB's etc, all the pieces required for the game. This box was given to me about 18 years ago on my birthday (I cant remember what was in it) and has a little inscribed plate which reads "Lee's HQ" with my birthday beneath it. It was a gift from my late Sister in Law who knew how keen I was on wargaming at that time and thought it would make a nice dice box. Sadly we lost her to cancer at the far too young age of 39 about 8 years ago so the box holds great sentimental value. I must confess on a lighter note that the box also saw service as a 'stash box' for a few years, and housed a connoisseurs small collection of fine hashish from around the world . Ah the memories that box holds! Anyway, I digress, older and wiser, it will now see service once again as a games box.

Painting.
One more British line infantry base added so far this week. I placed a few 60th Rifles as the skirmishers for this one. They were going to be Portuguese but I decided to hold fire on those until I get some later British infantry in Belgic shako from Baccus as being more suitable. The rear of the bases only now need marking with a number representing the number of 'blocks' represented so again I'll have to re do these. The small coin markers shown previously will then be placed over this area as blocks are lost.

I think thats everything covered. Now to take a deep breath and a box of dressmaking pins and begin marking out those hex points. Only once I am satisfied all is correct and 'true' will I paint those points in as subtly as I can. 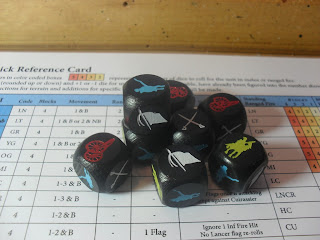 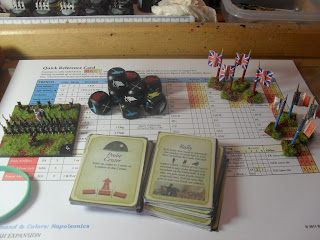 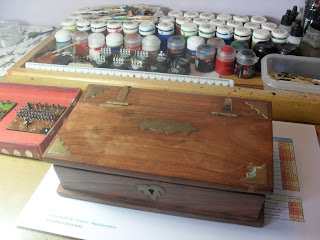 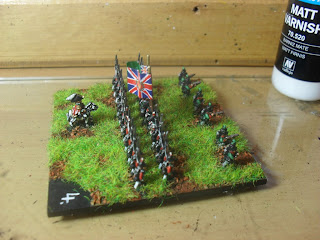 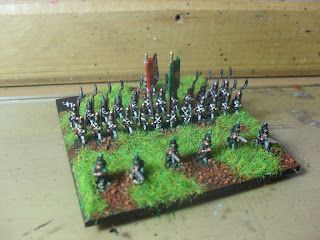