Firstly I'd like to thank all of you who posted comments on my last post "To hex or not to hex?". It has given me a lot to think about and many positive ideas and suggestions, plus links to other C&C related blogs which I will add to my list. I thought it better to reply to the comments in a new post (see below).

On the painting front I have added a RHA battery (2 model guns, 8crew - the '3' on the rear of the base indicates 3 blocks under C&C rules). Also a couple of French Howitzers, fine little castings, even the barrel handles and bands are visible. Baccus as usual. I want to do some Portuguese next, line battalions with skirmishers, but I think I may have to buy some of the Baccus Spanish figures with conical shako. I was planning to use British line but the officers are wearing bicornes. I need to order some more stuff from Baccus anyway next week.

More on the use of hexes.
One great suggestion made in the comments was the use of subtle 'point marking' rather than whole hexes, this is very clever I think. I want to stay as true to the C&C concept as I can and my one concern with non hex games is that hills/terrain would be difficult to conform. While I would lose the ability to create rolling landscaped terrain, from a gaming point of view it really does simplify things and I like that. But I have also been sent some great links showing very fine hex terrain, as good as anything non hex I have seen in my opinion. So I should not dismiss those hexes on aesthetic grounds, as clearly very pleasing results can be achieved with a bit of work.

The 'Hexon' system would appear to be the ultimate in hex terrain, and the pre flocked tiles look great. Bit expensive for me right now, but its something I would consider in the future. I am currently considering biting the bullet and marking out my Citadel battlemat in hex points or angles. I like the basic surface, but with subtle hexes and additional careful shading I think a good result could be achieved. My one concern is getting those angles dead right as past experience showed that hexes can tend to 'run off' if not  marked out very carefully. Any thoughts or suggestions on this please? The cloth does not stretch, its laid out and pinned down and I could mark the main outer grid as a guide of course first. MY hex template is actually 90mm across the flats (flat to flat), which takes a 60 x 60 base with just enough space to add a small leader base infront or at rear. I think the playing are would be around 3' x  5' or slightly less on the width. This is for the standard CCN 9 x 13 hex board.

I have a nice set of special CCN wooden dice coming thanks to 'Foy' of 'Prometheus in Aspic', who continues to assist me with all things CCN and who introduced me to the rules originally, a big thank you to you Tony.

Ross, thank you for those great links, I love your cats expression!

A couple of pics of the new artillery bases, again you see what I have to contend with now, while taking the pics 'Gibbo' decided to jump up and casually stroll right across them before pushing his face into mine !! 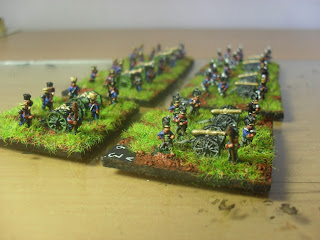 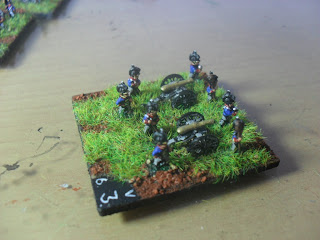 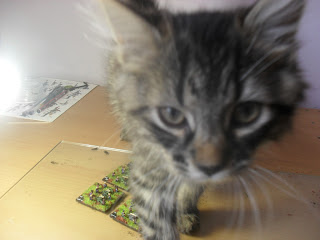