Thoughts on a 'gridded' board system for 6mm games.

Over the last week or so I have been doing an awful lot of thinking about rules. I find myself increasingly interested in the concept of using a system of grids, be they hexes or squares. I think this may have been kick started some time ago when my Mother in Law gave me an old boxed game 'Campaign' that she discovered in a Charity shop. This 1971 game seems to be a fairly simple 'boardgame' using rather ugly plastic counters. But the board itself fascinated me. I was already aware of Tony's use of a hexed board system on his blog, and also the 'Old Trousers' rules which actually used a square grid. Browsing the Baccus 6mm site introduced me to the 'Leipzig Lite' project, which uses a square grid, but very cleverly done. I thought it might be a good idea to jot down some of the ideas and concepts that I may like to incorporate into a set of game rules for myself. I may well develop these ideas further, but basically it sets out the kind of game I'd like to play, with the emphasis being very much on the 'game' aspect. It wont please Napoleonic purists, but then this project is about what I want from this hobby. Over the last couple of years I have reached this stage three times, painted up the armies, become disillusioned and given up. I am determined that it won't happen this time, I am committed to 6mm figures, I love painting them and I now need to find a simple set of rules to enable me to push them around the table and have some fun.

I have a much clearer head than on those previous occasions, my psychodynamic psychotherapy is underway finally and as I begin to clear all the jumble, clutter and junk from my brain I'm able to think more clearly once again (phew!). The diagnosis of Dysthymia from the consultant psychiatrist goes some way I feel to explaining why I was frustratingly unable to progress my hobby beyond a certain point on those occasions too, and as I move forward I am determined to enjoy my hobby as I once used to. So, without further ramblings here are some of the ideas/thoughts that I would like to include in my future 6mm Napoleonic games, as much by means of a record for myself as anything else!

Thoughts on using grids for 6mm games.
A grid system of 180mm x 180mm will allow me to deploy 'brigades' represented by 3 bases of infantry and 2 of cavalry. The 3 bases (60 x 60) would have to represent varying numbers of battalions, but could be given a 'strength' value factor.

Movement could be 1 square for brigades, no diagonal movement. A brigade could be allowed to change face once per move, for example to change from facing front to left face and move 1 square to right or left. This would leave them with an exposed flank until the next move when they could face front and advance 1 sq. Cavalry could move 2 sq's and change face or 1sq and change face twice.

All movement could be randomised by dice throws or drawing chips. Once activated a simple D6 throw could determine how well a brigade responds to activation/orders with veteran/elite units not requiring a roll, Trained units requiring throwing say higher than 2 and Raw units having to beat maybe a 3 or even 4 to respond. Modifiers could be quality of individual commanders.

Combat occurs when units move onto opposing squares, and is decided in the manner of Leipzig Lite rules possibly, with all outcome moves being made immediately.

Terrain is for an entire sq. All sq's are assigned a value by scenario, with points for sq's held/captured at the end of the game. a village objective would have a high value, maybe an important road junction or river crossing a value, and any sq's taken in the enemy territory a value, the deeper into the opponents deployment area the higher the value. The result of the game is decided by a combination of ground held/ taken and unit losses, commanders killed/wounded etc on a points system.

I do like artillery to be able to 'bombard' at range, so maybe 3 or 4 sq's with modifiers for range. I'd also like to be able to include infantry 'volley' fire possibly before close combat, and also to allow varying skirmish values to be included in combat calculations as a modifier.

Casualties could be recorded as actual losses maybe combined with a gradual reduction of a pre determined effectiveness level as in F&F for example, possibly using disorder markers, and shaken/retreat type markers.

Morale throws could be simple and quick D6 throws, using a modified BMP (basic morale point) system, that I found so effective in Johnny Reb.

The above are just some of the ideas I am toying with. I'll stop there for now! You can see that what I want is a very simple type of 'game' that centres upon command and control, randomised for solo play, with lots of maneuvering and very quick resolution of melees. I'd like to be able to play a game in a bout 2 hours.

I will add some links here to the sites I mentioned at top, the Leipzig Lite project is well worth a read as it describes the clever disguising of a grid terrain system as well as links to the rules used. I'd love to hear any feedback you might have on my proposals.

Leipzig Lite - from the baccus site.

Our Journey to Boridino - Also from the Baccus site, not grids but amazing pictures!

Painting progress.
It seems a bit pointless posting pics of each and every unit I complete, as lets face it, one infantry base looks very much like another in this scale! However, I have completed 2 more French units this week and have a unit of 18 French line lancers undercoated and ready. The lancers are quite amazing little casting, with crisply detailed lances and pennons cast on. I can't wait to see them painted and based.

Just a quick pic of the last Leger base painted this week, blue trousers for campaign (I might try those nifty little boots with the fancy tops next time!). And a close up of the amazing detail on the Baccus lancer figures pre painting.

So far the total sands at:

I have a 3 base Portugese brigade planned after the French lancers and Brit battalion number 8. 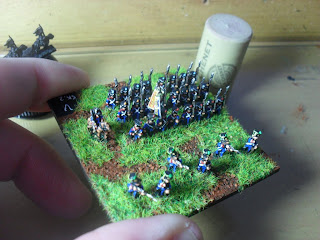 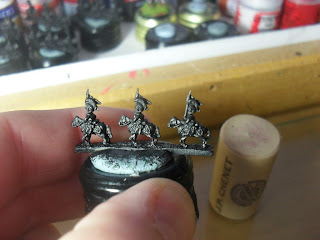 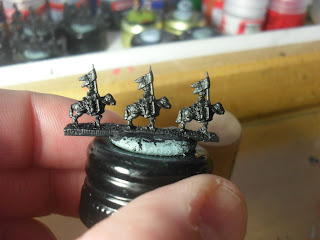