With the tanks now packed away I have been enjoying myself painting some Warlord French Resistance fighters and as usual they come with some fine character faces. This will be a 12 man/woman squad when complete and I'm sure I'll find a way to use them in a scenario. They carry a good mix of weapons including a captured MG42 and an assault rifle, they are 'inexperienced' but could still put down a fair bit of firepower.

I'm really now at the stage where I can paint what I feel like painting for BA, adding in those extra characters and terrain bits etc. To follow the Frenchies I have a German Opel Blitz truck with flak gun and ammo trailer, this will provide the Germans with some mobile Anti Aircraft fire when the Allied Air Strike comes in, adds another factor into the game.

To finish of my Russians I have an armoured car, observers and dog anti tank mine team on the way this week. I'll also add an Airfix Sturmovik to round things off.

Thanks to 'Norm' for his input and suggestions re tank combat, the idea of only allowing 'Superficial damage' when a Sherman hits a Tiger (or any heavy tank) frontally feels just about right to me. This means even when a lucky 6 is rolled the best that the Sherman can do is to disable it and pin it frontally, there are modifiers for side and rear shots that will just about allow for a kill shot if lucky.

French Resistance for BA plus two civilians for my Granddaughters budding collection! 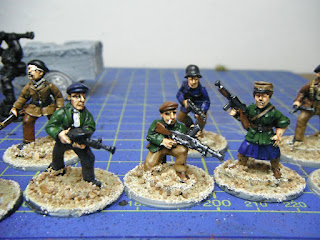 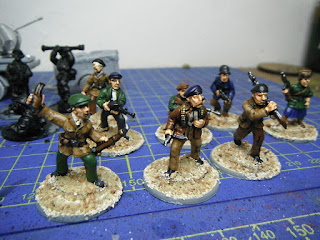 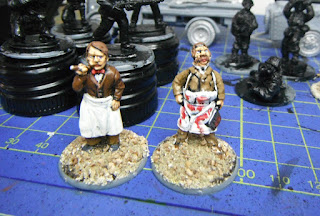