Well, the eBay purchase of 15 T34's duly arrived and I wasted no time in unpacking them and giving them the once over. I did not pay a lot for them, £50.00 for the lot, so I was not expecting too much. They are the older resin/metal kits which I rather like, and all had been given the base green coat with track work painted in bright silver! A couple were broken on the resin sides so I discarded them and ended up with 8 x T34/76's 4 T34/85's and a command T34/76 with draped soviet flag over the turret, a nice little touch. It did not occur to me straight away that the turrets had cupolas added on the commanders side, infact it was not until after I had spent a couple of hours working on them with ink washes, weathering and highlighting that it struck me that they were the latter 'Vietnam' version as sold by Battlefront. A bit of research told me that (luckily) the addition of the commanders cupola was the only real difference so I duly removed them with pliers, and again it was a bit of luck that they all came off quite easily with no further damage. I have started to replace these with simple closed hatches from green stuff and will repaint them today. 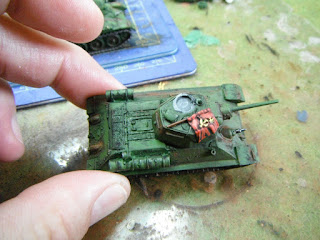 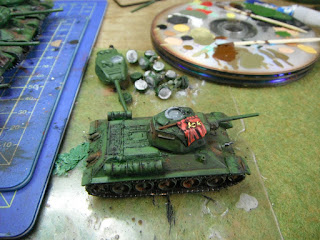 I have also ordered a pack of 5 more T34's from the 'Plastic Soldier Company' to round things off and give me 4 platoons plus 2 command tanks, fingers crossed they will match well for scale, they certainly look to be fine little models. Also from PSC I have on order a couple of decal sets to detail them with. All will be based to match the Forged in Battle models and the excellent Tony Barr of East Riding Miniatures has once again cut me several custom sized tablet packs. Once all is gathered together I should have around 60 tank models across the three armies, US, German & Soviet.

Not done much on the Bolt Action front this week, just finished off the Soviet anti tank team and put together a multipart plastic figure to add a soviet flag bearer to add a touch of colour to the otherwise rather dull hordes. Having watched an enjoyable video of a Bolt Action game that featured a mounted charge by cossacks against a German infantry squad, the opportunity of painting up a unit of cavalry for my own Ruskies is tempting. As Warlord don't make them I have been pointed in the direction of Copplestone Castings who produce some wonderful castings under the 'Back of Beyond' range. Lists allow a unit of up to 12 cavalry, and in typical Bolt Action style they are pretty powerful, more so than they should be I'm sure, but great fun. In the report I watched they were held back in reserve and came in on a flank on turn 4, destroying the infantry squad they charged! Just another option within the army. I also have another Airfix model to build and paint, an Ilyushin Sturmovik 'airstrike' marker for the Sooviets, I really enjoy doing these kits.

Pics show the T34's as they arrived and after 'improving' them with a wash and paint job. Cupolas removed and ready for replacing. Soon as I'm ready I'll play a FoW game to refresh my memory, but I still retain much of the armour based rules at least in the old brainbox!