I now have the US and early German ready painted tanks, with the Soviets due any day now. I'm well pleased with everything so far. The fifteen T34's will face off against the Panzer Mk IV's and a platoon of up gunned Pz IVJ's, while the US tanks will face off against a late war German force. I'm intending - at this stage - to stick to fighting armour based games alone. All are resin/metal models by Battlefront and Forged in Battle, the latter being new to me but the models are really nice, so nice in fact that I could not resist ordering more! The FiB models are sold in platoon packs, resin hulls with metal parts, and are cast on resin bases which I rather like. They are reasonably priced, cheaper than Battlefront plastic kits and feature lots of fine detail.They match for scale perfectly. Of course I gave in to my well known love of Tigers and my order includes a three model box of Tiger I's. With little to do in the way of construction things should come together very quickly.

The US eBay purchase actually contained more than I had bargained for, I had not even noticed that included was a platoon of 3 self propelled artillery and 9 lovely little jeeps, I was only expecting 5 Shermans, 4 M10 tank destroyers and 5 Stuart light tanks. OK, so I have no idea how I'll use 9 jeeps, but they are rather smart. Thanks to James, (Mad Tin Hatter blog), I also have an additional 4 Shermans to come, very kindly gifted and gratefully accepted, cheers James. I was going to use them as lend lease Soviet tanks, the Shermans look good painted up with Russian markings, but as I already have (or will have) fifteen T34's it makes more sense to add them to my US armour force I think. I'm excited at the prospect of fighting 15mm armour battles again, and my plan is to play infantry platoon level games with Bolt Action, having slimmed down the 28mm armour, retaining just a couple of armour choices per force, so for example my BA US force retains 1 Sherman and 1 M10 with the rest going on eBay.

I sold a few of the tanks this week to a local wargamer John, who is the Chairman of Maidstone Wargames Club. It was nice to meet him and we had a good chat about the club and the games they play. We live just a few miles apart! I'm tempted to join, although not a naturally 'clubby' sort of person the convenience of meeting on a Saturday morning a couple of times a month sounds just what I need and it's only a 45 minute drive or so. John took a Tiger, StuG, pak40, and two M4 Shermans off my hands and assures me they will be well used so I'm happy, with funds being invested back in more 15mm tanks.

Some pictures of what's arrived so far. Should anybody require a couple of 15mm recce jeeps for their US army I'm happy to share them as I have far more than I need, drop me a line and I'll drop them in the post, no charge.

All models will be based to match the FiB models. Tracks need attention on the American tanks but no big deal. A few MG's feel of in transit, again not a problem sticking them back on again. 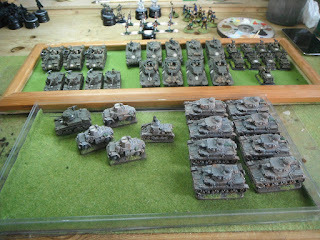 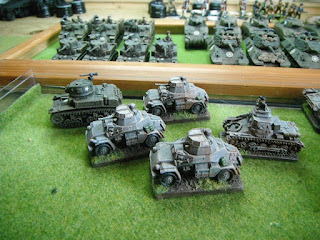 And a quick glimpse of the first AB figures painted, but not finished. I timed myself at just under an hour to paint these 8 figures, they will now get the final touch/detailing before basing. 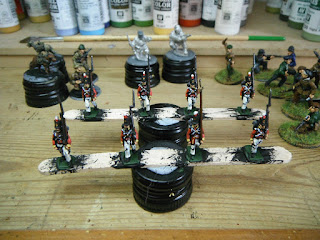 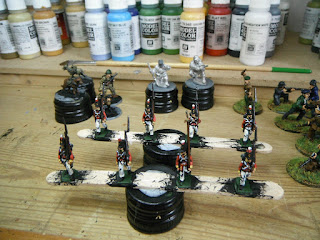