Flames of War.
With the imminent arrival of the Panzer IV platoons I have been giving some thought to how to use them in their historical role, because clearly by the time of Normandy invasion they were pretty much obsolete. The models are very well painted in the earlier dark grey and they are far more suited to the Russian front than late war. So when I spotted fifteen T34's (76/85 turrets), all assembled and base coated ready to finish I grabbed them! They are all Battlefront resin/metal models and will make the perfect opponents for the Panzers. I can see this developing nicely as a side project now.

Bolt Action.
Of course I will keep my 28mm Bolt Action infantry based armies, I have about a thousand points each of Russians, Germans and US troops. Rounding things off now, each force will retain a couple of tank choices with the rest being sold off to recover my costs of the FoW tanks. I wanted to add some flak to my German force to counter the Allied airstrikes, and  the Opel Blitz truck (great name), with it's 20mm flak gun and ammunition trailer proved irresistible. Might tone down the woodwork a bit more, but I'm pleased with how it all turned out. I also decided to remove the artillery pieces from their bases in order to allow for casualty removal. I have been doing a lot of reading up on BA games and am convinced that the use of indirect fire HE can do a lot of damage so the light howitzers are back in my lists, along with the medium mortars. I have added another half track to tow the gun onto the field to gain the best advantage point. The German force ' reinforced infantry platoon' now feels well balanced with it's 4 squads of Panzer Grenadiers - two of which can attack in half tracks- MG42 teams, mortar and sniper team, and with a choice of the Stug in classic infantry assault role or the Tiger, along with the howitzer and flak gun should prove a force to be reckoned with. The pak40 anti tank gun remains on the subs bench now, as I feel the howitzer is a more useful choice in a standard BA game.

AB figures.
Amazingly after reading on the Fighting 15 website that orders can take up to 8 weeks to fill where items are out of stock my order arrived in 24 hours, fully completed. This is the first time I have seen these figures up close and they really are beautiful castings, so evocative of the Peninsular War. I have enough figures and guns to cover most of the Commands & Colors scenarios replacing each blog with a single figure. Much as the temptation is to paint up full units I know that's not a realistic proposal for me as I'm committed to WW2 mostly right now. Still, I will enjoy the project and will add the Portuguese etc in due course. I'm looking at magnetizing the individual bases using washers and magnetic sheet this time.

A few pics of the new BA bits including the Opel Blitz and the howitzer removed from it's former large base which makes it easier to hide! 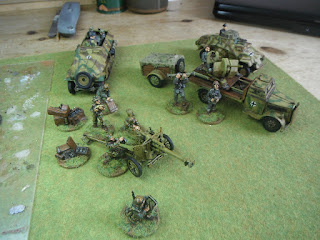