Tiger versus Sherman, the test.

As you can see by the photos below my Bolt Action collection is about finished. I just removed the bases for these shots. OK, so I went a little heavy on the Shermans, but overall I'm pleased with everything, just have a final bid on for a lovely pro painted German Puma armoured car ending Sunday and that will be it. I do have the same kit here unbuilt so if I don't win the auction I'll probably take my time and built the kit and paint it later. I'm now going to start to put some proper BA lists together as I have plenty to select from, the focus will be Normandy.

I did have a somewhat disappointing run through of a Tank War battle the other day, I wanted to do the classic test of armoured warfare rules by pitching  M4 Shermans and a Firefly against a couple of Tiger I's. IN my opinion, if a 75mm Sherman is capable of punching through the front armour of a Tiger then something is not quite right. In 2 test games Tigers were destroyed by Shermans, the first was killed by two 75mm Shermans, first shot hit the tracks and disabled it for the turn, with the second Sherman finishing it off by rolling a 6 with a +5 penetration to beat the Tigers defensive value of 10, then requiring only a 4+ on the Damage results table to kill it. Just a little too easy for my liking. On the other hand the Tiger was missing it's 'hit' shots with a run of poor dice throws, and it becomes apparent once you start to play armour only games that firing a single shot/ dice to hit produces a string of potentially bad results that are averaged out when playing infantry based games where you might be rolling 12 or more dice for a 10 man squad with mixed weapons. If you move and fire it's a +1 modifier to that basic 'hit' requirement of 3+ so you have only a 50% chance of scoring a hit and that does not change even on a second shot so you have the spectacle of an experienced Tiger crew missing it's target at ranges where it should be most effective. Much to think about, it's clear to me that the armour rules are 'broken' but it's only something that becomes apparent once you play armour only games, they work OK within the context of infantry games with perhaps a single tank model in support role, but that's a bit of a blow to me having been building up my armour collection for months in order to play some tank only games!

The final insult was a 'FUBAR' result (double 6) on a Tigers morale throw after it had been hit and pinned by a Sherman M4. I abandoned proceedings at this stage to re check the rules, but the FUBAR chart stated a 'panic' resulting in the Tiger executing a 'run'order away from nearest enemy, I have re checked but can't see anything excluding tanks from these results?

Might need to revisit Flames of War for my planned tank battles as they do model tank v tank actions very well in my opinion. 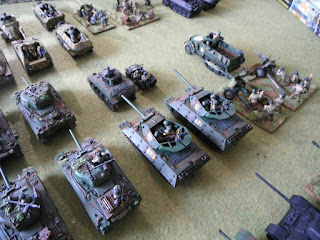 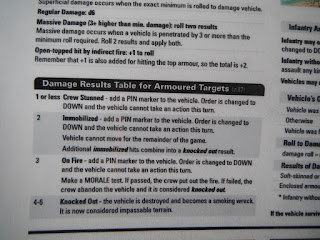 Edit: I have been giving this some thought since posting the above this morning, family are away to Brighton for the weekend, Youngest Daughters 15th Birthday, ( she was our little 'surprise' when I was 43 and my wife 40!!), now taller than Dad, slim and with bleach blonde hair). Anyway, with time on my hands I have been spending a bit of time playing with my tanks. There may be a simple 'fix' to my gripes around the 75mm Sherman punching a hole through the heavy frontal armour of a Tiger, downgrade the 75mm Sherman to a 'Light Anti Tank Gun'. Still a Medium tank but with a less potent main gun. By dropping the penetration modifier to +4 it becomes impossible to penetrate a heavy tank, even on a roll of 6 the worst you can do is to disable it ('superficial damage' so it's a D6 -3 roll with a 4,5 or 6 to knock it out, which obviously can't be done. Thinking about it, this would now bring these results more into line with FoW results. I'm feeling a bit happier about things now, but there is still the issue of the Target missing the same target twice!