With both the US and German Bolt Armies completed now save for the odd character figure I'm very close to finishing the Soviet force too.

I have now painted the BA 6 armoured car, a fine little resin and metal kit that went together very well. A quick paint job, using a predominantly dry brush to begin with, followed by a highlight and weathering, and the model is ready for battle. It's my recce vehicle, and armed with it's 45mm anti tank gun and two machine guns it should be able to look after itself in this role. IN Bolt Action, recce vehicles always have the option to scarper by using it's special recce move to escape danger, and with a top speed of 40mph, it can certainly get around. Interestingly this vehicle could be fitted with tracks around the rear wheels when conditions demanded it so it's a versatile addition. 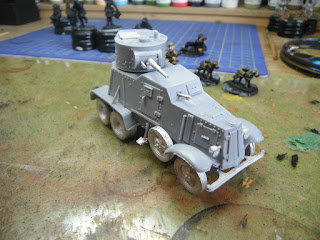 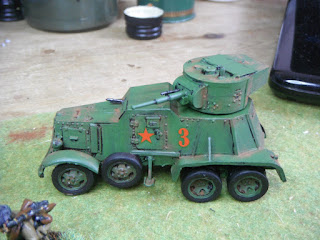 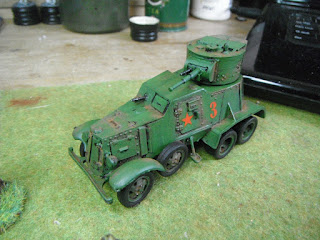 Also now based is the anti tank dog team, not something I'm keen on, but it's only Bolt Action after all! The Zis 3 artillery piece is also a versatile piece as it can function as both anti tank gun over open sights OR as a light howitzer to drop indirect HE shells when required to do so against troops in buildings or concealed, subject to LoS via a spotter. You have to think carefully though about where you site your observers as they are always a target for snipers. The final piece will be a GAZ truck, to tow the gun onto the table of course, and that's on it's way from Warlord. I'll get the Sturmovik done next, and that's the lot for the forseeable future. 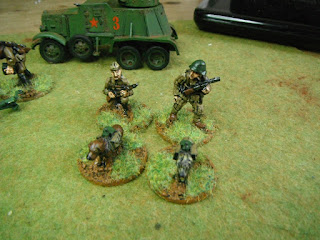 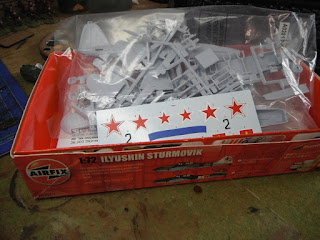 The 15mm tank collection will stop at about 60 models, all of which I now have, as my intention is only to indulge myself in tank on tank battles in this scale as an alternative to the infantry platoon based BA games. I still need to do a bit more work yet, especially on the German side, but the US and Russians are mostly done and based now. I'm really impressed with the Forged in Battle models as they require so little assembly and are cast on bases, I'll get some photos up here once I get some paint on them.

That's it for now, I hope to have pictures of the entire Russian force by the weekend once the truck and aircraft are finished. Busy times at home and I have been painting and decorating around the place as well as clearing out the garage and garden shed, the football has also been something of a distraction!