US armour and cheap transports!

Saturday morning again, another week flown by. Had a change from Russians mostly this week and focused upon getting the rest of the bits painted up for my US 'Tank War' force. It's almost there now, just the anti tank gun and tractor to paint and that's 1500 points. Its basically a reinforced platoon of 3 Sherman M4's, with an M10 tank destroyer, an M5A1 Stuart for recce, anti tank gun plus tow and a bazooka team. The German force will be based around 2 Tiger 1's with veteran crew for 950 points (!), Puma command vehicle, Pak40 anti tank gun, and Panzershreck anti tank team.

Rust, mud, oil stains and chips!
The intention up to now has been to bring everything up to a standard where I can use it, and then to work back adding details, weathering, highlighting etc to tie it all together. With the US armour now done it's time to add a few touches of rust, runs and stains and even chips to add realism. All five tanks got a liberal coat of black wash followed by rust and are currently as seen in the pics. I still need to add highlights to the green and then a spray varnish to fix everything.

A quick note on the products used. I'm new to 28mm tank painting, but no doubt a touch of the above adds to the look of the thing so I had a go! The Vallejo 'rust' pigment is easy to use, I prefer to just use a dry brush to touch it on, a wet brush producing a slightly less subtle effect I find. The 'Antiskid' paste is just a gritty medium that when mixed with earth coloured paint gives a realistic effect of mud packed onto wheels and tracks etc, That's my next job. The chipping medium I have yet to use, but I have seen the effect it gives of chipped paint, possibly from small arms fire bouncing off the armour. 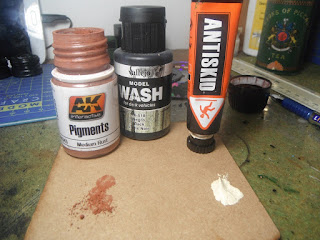 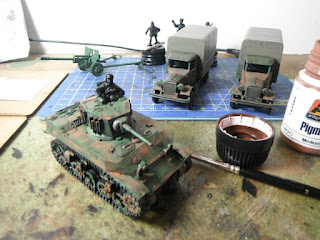 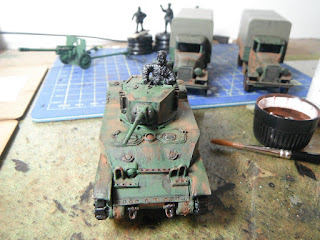 US transport trucks on the cheap!
I got the idea for these from a guy on the Bolt Action forum, who produced trucks for his Germans. I was so struck by the result that I just had to try it. Currently, a Warlord resin and metal truck kit costs around £25.00, not seen them any cheaper, so to provide a 5 squad platoon with transport is going to cost £125.00 for the lovely 'Duece and a Half' truck models. So, I went on eBay and bought 5 of these 1930's Mack trucks for £4.00 a shot, (£3.00 if you are lucky!). I gave the first two a black primer and quick paint job and I'm really pleased with the results. Each will carry a ten man squad into action, so they can be pushed towards an objective at speed. I think the five with postage cost around £24.00 total. I'm thinking of something suitable for the Germans now, but may stick with half tracks, not sure yet. 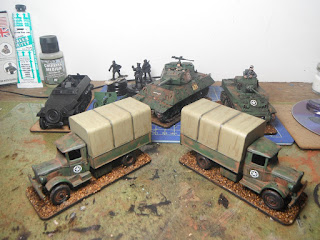 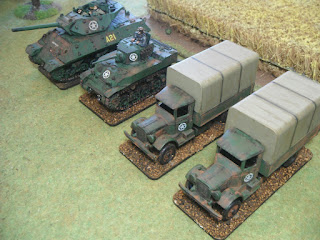 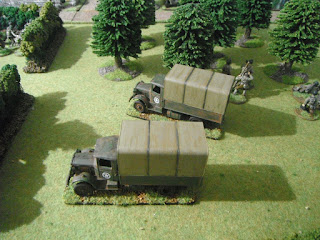 Finally for now, the ME262 is ready for painting and as with the Typhoon model I replaced the pilots head with a more characterful 28mm Warlord face, just a bit of fun to bring a touch of BA humor to the table and the collection. paint scheme will be green/grey with dappling! Airfix kit of course and will sit on a 10" brass rod above the table when an airstrike is called in. 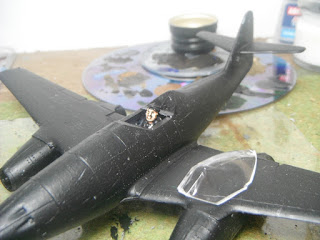