A sad anniversary, B17 crash site.

There are many WW2 aircraft crash sites dotted around the Romney Marsh, the Battle of Britain was fought in the skies above Kent, and the flight path for the bombers heading to Germany took them across the English Channel and back again. Many never made it home. This morning I passed a sight that I have known for many years, intending to stop on the way back to pay my respects, I noticed a small gathering of Royal British Legion Ladies and Gents laying a reef. I have not visited the sight for about eight years so was pleased to see it being kept nice and tidy, the grass freshly cut. Imagine my surprise to learn that today, April 13th is the exact day in 1944 when the Flying Fortress 'Spare Parts' crashed, killing the pilot who saved many lives by steering the burning plane away from the small village of Hamstreet and crash landing in the field nearby. The plane was seen to be on fire as it crossed the channel on it's way home, having encountered German fighters, and Captain Johnson ordered the crew to bail out, which they did successfully, he then sacrificed his own life to save the lives of others.

So touching that an incident all those years ago is still remembered by locals and that such obvious care is taken to keep the site clean and tidy. It's a beautiful sunny day here, as we sat and ate our sandwiches by the flag pole I wondered what it was like back in 1944. 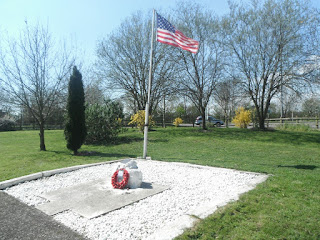 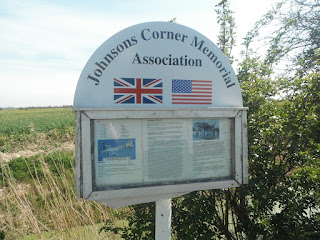