This is just a quick photo update to show off a few latest pieces which includes a second resin and metal Warlord Tiger 1 plus a lovely little 'Hetzer' with it's amazingly low profile and sloped front armour. The Hetzer is also a Warlord resin kit, went together like a dream in about ten minutes. It came with a fantastic commander metal figure, but I decided to do this one 'buttoned up' hatches closed in order to retain the profile, you can hide it behind almost anything! The figure became the commander of my second Tiger, and once again the fine character face stands out for me. 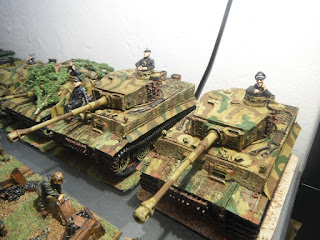 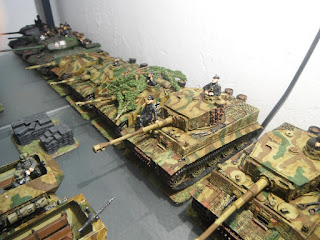 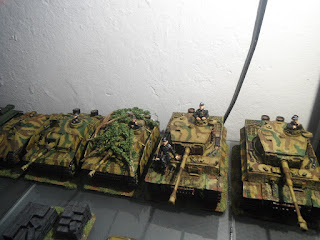 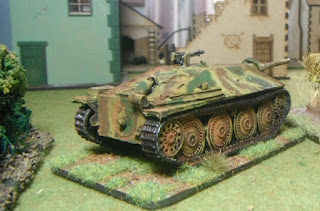 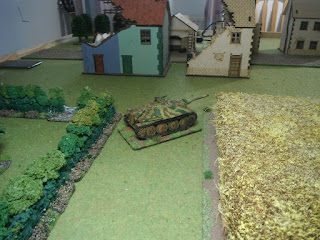 Terrain upgrade.
I mentioned previously that I find myself in a position where I am able to spend a bit of extra cash on my hobby for the first time in years, (given the usual domestic demands of mortgage and kids etc), thanks to a transfer out of an early pension scheme. I'm not getting any younger, I'm 58, and having 'lost' a big slice of my fifties to depression from which I am slowly recovering, I'm determined to waste no more time and to start enjoying my life again. I'm mobile again and the freedom of being back behind the wheel of a car is amazing.

Anyway, the upshot of all of this is that I have been able to invest in some better quality terrain and scenery. On order I have new roads, wider roads for towns/villages, some lovely river sections, and some taller trees from Simon at S&A scenics. Simon is making me some bespoke trees in the same style as his 'size 4' in order to raise the scale slightly, they will mix nicely. I also have resin craters and rubble mounds etc to dress things up a bit. I have plans to re texture the entire board surface at some point too.

Pics below from the eBay purchase, they should be with me early this coming week, but I think you can see the quality of the finish on both the roads and rivers, the wooden bridge is also included and all are made to order. I particularly like the roundabout on the crossroads section. I will post a full review once I have them, plus links to the sellers sites. 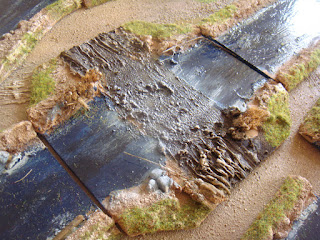 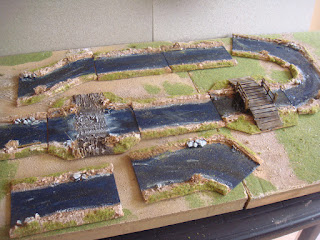 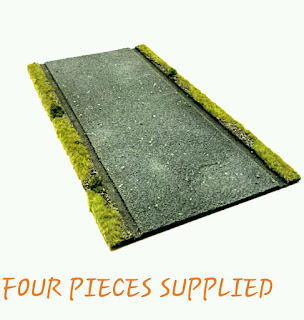 Buildings.
Decided I also required more MDF buildings, and after a lot of searching went with those made by 'Daves Wargames' via ebay. They are slightly cheaper than the two huge buildings I currently have and MUCH easier to put together in no time. Of note is the fact that the kits all arrive pre punched from the sheets, that saves an awful lot of time too. I have another three to put together at which stage all will be painted and dressed up a bit with period detail. 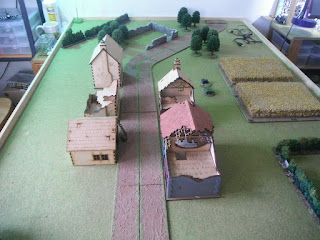 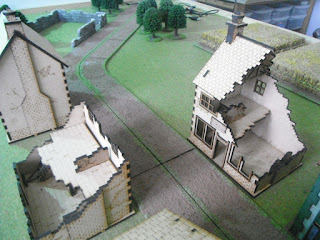 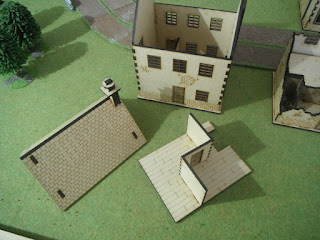 And as you can see from the pics above the table is set for a game of Bolt Action, this time German v Russians so I have tried to create a more open board, no hedgerow along the roads, but with smaller pockets of cover to exploit. I was reading a thread re Tank Riders on the BA forum where it was pointed out that as the rules stand a single pistol shot from say a medic's sidearm could force an entire SMG armed TR squad to jump off immediately! Have to get mighty close though, but that's BA for you!
Posted by 'Lee. at 01:19