I had been looking around for a means of re creating that classic late war Panzer foliage covered look, but had not been able to find a suitable product for the branches. Yesterday I went hunting in the garden for suitable small twigs, gave them a coat of super glue and rolled them in Noch 'leaf'. After a couple of coats building up the density slightly this is what I achieved, I'm quite pleased that I found a simple quick solution to this.

I don't want to glue them on, they can just there for now. I might add a touch more contrast to the leaf, not sure yet, possibly a few browns would improve it. I have read that the Panzer crews did not like netting, but rather were issued with 'D' rings to weld onto the body into which the branches were pushed. When I get to my M10 I will be experimenting with surgical gauze for the netting as often seen on them.

Sturmgeschutz with added foliage, commander watching the skies as so often seen in the newsreels. 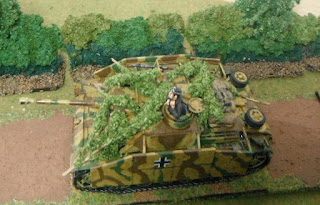 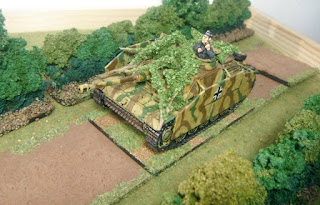 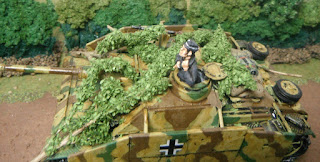