It's unseasonably cold and damp for this time of year, and having been up early to run my daughter to work followed by the usual dog walk on the beach I plan another run through of Bolt Action today.  I'm just sitting catching up last night's Match of The Day (poor old Villa), while sticking another MDF building together for the game, but the table is basically set up ready as seen below. I will go through the standard Bolt Action procedure so dice for scenario, dice for attacker/defender, place objectives, deployment, first wave plus reserves etc. game will be German v Russian and I will write it up in full for the blog.

Tank riders will be used for the first time and I have managed to squeeze five of them onto the deck of my T34/76, including one I made up from plastic bits to create the guy pointing and grasping a panzerfaust. They of course represent an eleven man squad armed to the teeth with SMG's so that's a LOT of firepower combined with mobility. From reading the BA forum it seems TR's will be lucky to get beyond the first move without the riders being forced to dismount, but a run order or movement by road could potentially push them well forward towards an objective. It's a typical BA dilemma, do you push them forward as part of the first wave, or hold them as reserves to exploit a situation that might arise. One bit of advice was to hold them back for a flank attack, but that's risky as they may never actually get on if the dice go against them.  From the German perspective opening up on the tank (you can't target the riders specifically), will force a dismount, but you are then faced with eleven angry riders getting 3 shots a piece for the SMG's. Should be an interesting game. 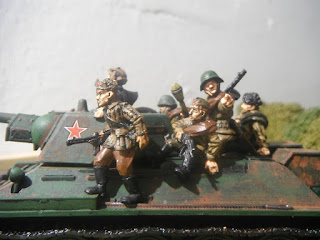