First dice out is green the Sherman opens fire again with it's MG's but this turn it's hit by the panzerschreck team, just equaling the armour rating of 9 ( penetration 6, die roll 3), for a 'superficial damage' result .....again the crew got lucky! The infantry firefight continues with heavy loss on both sides, but the Americans have two infantry squads left on the table to the Germans one. There's little in the way of tactics in this scenario, both sides have just 6 turns to reach the centre of the table, grab the objective and race back to own table edge to win.

The effectiveness of pinning has become clear to me and the little markers make it easy to keep track as pins are constantly changing, so for example when a squad or team passes an order test, 1 pin is removed from the unit. I'm finding that once a unit has taken 3 or 4 pins it's hard to get it to follow orders. The half track cleared it's pin and fired it's MG into the infantry in the road ahead. Mortar fire was not proving very effective so far as the targets were constantly moving so that they had to re range in each time, but did score a couple of hits at least. The little US recce jeep proved it's worth, firing its 30cal MG on 3 consecutive turns from the cover of the hedgerow, scoring pins and casualties each time.

The value of smaller squads and teams becomes apparent here, for example it struck me that 2 x 10 man squads firing can only put 2 pins max on the target, while 3 x 6 man squads could in theory put down 3 pins on the same target. Every shot counts, the platoon commander fired his SMG for just 2 shots, then fell as a hail of bullets were returned ( no plus 2 on morale throws if within 6" now). Turn 5 ends with the Americans back in control of the secret documents, a lucky dice and a 'run' order could see them win the game in turn 6, the only unit that can really stop them are the veteran grenadiers, but they end the turn heavily pinned and on a 'down' order for self preservation, will they pass the order test to get them back up again?


Turn 6.
I was reading through the latest posts on the Warlord Bolt Action forum this morning and thought this sentence summed up the game pretty well, "Remember what Bolt Action is trying to represent as a game - 'comic-book' infantry fast play. "  That's certainly the case here and I'm loving it!

First dice out is grey, there is only one order, it must go to the battered veteran squad, 'advance' but it has no less than 6 pins and it's NCO has been killed, requires an order test, vets pass on 10 or less (2D6). They need to roll 3 or less to pass, (10 minus 6 pins minus 1 for loss of NCO), and of course they fail. They take a 'down' order dice and it's basically game over, as there is now nothing to prevent the American infantry from escaping back to table edge, the MG42 team also being 'down' for the turn. On the first green dice I ran the squad back down to within 3" of the table edge, game won effectively. I took my eye off the ball for a while and overlooked the fact that the sherman was still vulnerable, and in one of the final orders of the game the panzerschreck team scored 'massive damage' on the tank and it ended the game in flames sadly.

So a win for the Yanks, but only just. An odd scenario I thought as its a race against time so you have to move fast and throw everything into the centre, tactics don't play much of a part as it's a game of attrition. Would be interesting to play it again sometime with slightly adjusted armies maybe more smaller squads ( the advantage of more dice in the bag is another consideration of BA gameplay), possibly an extra MG42 for the Germans as allowed in the lists, replacing the mortar which is not best deployed in such a fast moving game as this. I only missed a couple of things, overlooked a couple of medic save rolls, and forgot once or twice to offer the opportunity to a unit under fire to go 'down' as 'target reacts'. But overall I feel I'm getting a good grip of the rules now and the game flowed really well with very little checking of the book, just referencing my wall chart. I really enjoyed moving the individual soldiers around the table, very tactile and 'old school' and found no issues with measuring movement as it's very forgiving in BA.

Conclusions.
The game has certainly left me wanting more, but for the next week or so I'm going to be stripping the table back to finish off those hedges and generally work on improving the terrain. As some scenarios feature 'air strikes' in the form of a ground attack aircraft coming in, I of course had to replace my FoW Typhoon with a larger 1/72nd Airfix kit, first one for over thirty years, felt odd opening the box up, a real flashback in time. Anyway, wasted no time in getting it built, a very simple kit that goes together perfectly, it's already undercoated ready for it's paint job. I reckon if it hovers about 12" above the table on thin brass rod it should look about right.

This week I will be  placing my first order for 30mm AWI figures from Graham at Crann Tara, UK distributor for 'Fife & Drum Miniatures'. I'll be painting up for 'Sharpe Practice' rules. I dug out a couple of snaps from 2014 of Fife & Drum examples I painted up, I think you can see the fine scale quality of these figures, slim with long muskets, and approx 30mm tall. 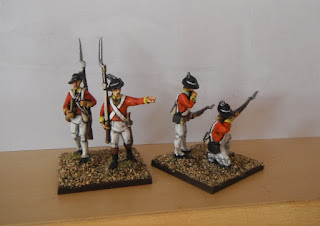 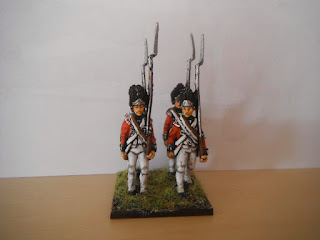 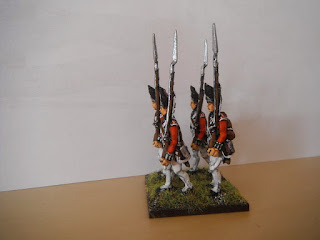