More painting and the Mulberry section.

Last night I had an enjoyable painting session and finished off the German HQ figures. I have been finding it hard to find the time recently to get in a good long session with the paintbrush, but with the German force now close to completion (for the time being), I'm trying to get it done so that I can refocus back on my US forces. I was pleased with the finished face of the observer figure, only to realise that you can't actually see it when he's on the base! Oh well.

I have just the howitzer model to build and paint now, plus the four crew, you get some really nice extras in this kit, ammo boxes etc.

On the US side I'll be going with three full strength infantry squads, support teams, HQ teams, recce jeep and two Sherman M4's, lists says only one of course, but I'm currently learning the game solo and my experience with Shermans has not been good so far when up against the StuG. I'm going to add weathering next. I'm having to think about basing the tank models too as the tracks are snagging on the terrain mat and it's annoying me.

I'm going to experiment with cammo netting for the Stug next, surgical gauze apparently is the way to go, that and green tea leaves! Does give that authentic late war look though to German AFV's. 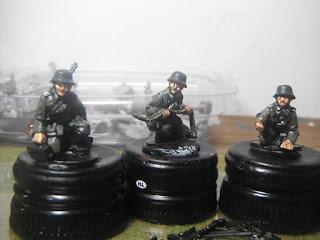 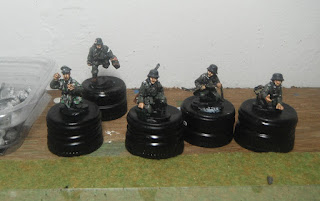 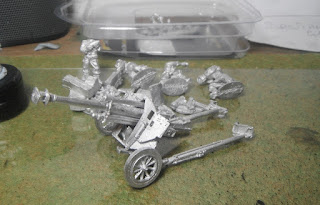 This is the Mulberry Harbour section that broke free and sank at Greatstone before it could be towed across the channel, interesting to note that Steve the Wargamer also knows of another section along the South Coast, I wonder just how many were abandoned? Now days it's used by locals to fish from and I think the coastguard moors up there for his lunch.

Pics, Greatstone on Sea, Romney Marsh, Kent,we walked a friends dog there on Tuesday and not a sole was to be seen! 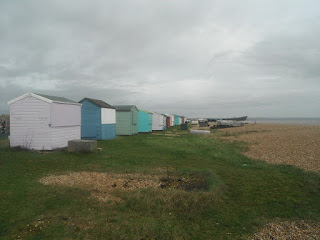 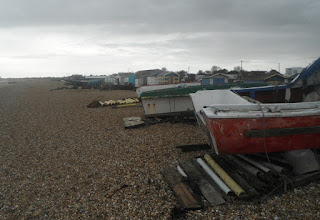