I had been working away on this huge model for some time, having had some issues with the fit of the tracks/wheels, but after a lot of filing of the resin decided I could not get it much better than this. It's hard to see hopefully, but the track sections are not quite a flush fit to the hull, resulting in the slight gap you see between front mud flaps and hull, something I will need to address in due course, although once on the table I'm sure it won't notice much, She's quite heavily weathered and awaiting some cammo branches etc. The model is the 'Wittman Tiger' by Warlord. On the subject of foliage, I read recently that the German Panzer crews were not so keen on netting, preferring to weld 'D' rings directly onto the hull, (these were issued for this purpose), so I'll go with that I think. It bothers me when I see model tanks covered with netting across the hatches, if you had to get in a hurry the last thing you would want was to be snagged on netting.

The turret command figure is the Wittman model, and the model in classic propaganda pose, sitting on the turret will grace the panzer when on the display shelf.

Where next?
I just don't know what to follow this project with! When I started again I swore I would only do new stuff, periods or campaigns that I have not covered before, and even though the AWI is calling me back I have a strong urge to do something fresh, for example I have never in thirty odd years done 'ancients'. But my starting point must now be rules, Just as Flames of war and Bolt Action have opened up a whole new era for me, I'm searching for that spark of inspiration to move forward. Colonial period is also tempting and would be new to me. I have a few ideas bouncing around my brain anyway, time will tell. 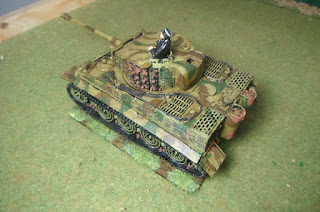 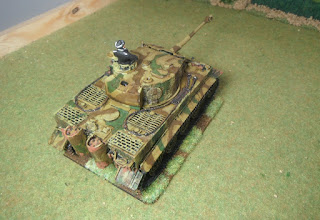 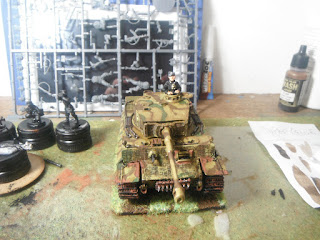