Turn 3.
So we begin turn 3 with both sides waiting to see who gets the first activation, and this time it swings the other way with 3 grey dice being drawn first, giving the Germans a real chance to stop the US infantry carrying off the documents. They opened up with everything available onto the Americans as they attempted to withdraw across the road to safety, putting  another 3 pins on them for a total of 6 and reducing them to just 3 men, I honestly thought it was game over for the Germans before those dice came out the cup, as it seemed inevitable the Americans would carry off the objective, but concentrated firepower stopped them and they failed the required morale test. They dropped the objective as they fled, which can now only be retrieved by another infantry unit, (my interpretation of this rule means that HQ teams can't do it, but I need to check, as I can't see why not?).

The Panzerschreck team moved through the hedge on an 'advance' order and let off a shot at the Sherman's front armour but failed to hit it, the tank having already fired it's MG's at infantry across the road and taken an AP shot at the half track which hit it, but failed to destroy it causing only 'superficial damage' , bit of smoke rising and crew a bit stunned for this turn only, it also takes a pin and a 'down' order dice to show it's immobilised for the current turn. But this gives the third US infantry squad the chance to move through the hedge and dash back towards the objective (red blob!).

The German Grenadiers now began to emerge from the orchard, directly opposite where the objective marker lay, and they take numerous pins and casualties as the Americans pour everything into them, even the commander advances and lets off his SMG, adding another pin and killing one man. The sniper on the first floor of the building puts a pin and kills one member of the MG42 team, this team having done much damage to the US infantry.

Turn 4.
It's vital for the Americans that the first dice out is green, as the Sherman is vulnerable, the panzerschreck is pointing directly at it's front armour and the crew know that the penetration capability of that weapon can tear clean through. If the first dice is green the Sherman could open up with it's machine guns, giving two 4 shot chances to take out the anti tank weapon before it can shoot, so it's tense! hand in the cup, give the dice a shake up and .............

...It's grey. The tank crew brace themselves, the panzerschreck fires but misses again narrowly (a throw of 1!), phew, next dice out is green and the Sherman reverses slightly to clear the road and opens up with it's MG's to prevent German infantry from moving onto the objective to retrieve it, adding another pin. As pins accrue during a game it becomes more difficult to get troops to follow orders, requiring an 'order test' to activate any unit with pin markers, each pin reducing the score to pass by 1. So a regular infantry squad would have a morale of 9 and three pins would require a 6 or less to pass  (2 D6), in addition, loss of the NCO also reduces the score by 1.

Now a German infantry squad dashes onto the objective, picking up the documents, but takes heavy fire and more pins, reducing it to half strength for the turn and fail a morale test. Again the objective is dropped on the ground, it's a poison chalice as units know they will take withering fire if they grab it. The half track takes an order test for its single pin and fails it, so it gets another 'down' order for turn 4. With 2 squads already lost in the fierce combat only the German veteran squad is left to win the scenario, armed with assault rifles they burst forward from the orchard and the Americans open up with everything! They take pins and casualties from fire from infantry, MG42 and the US sniper who draws a bead on the NCO and down he goes, leaving them without a commander next turn in addition to 3 pins. (Snipers ignore all cover modifiers etc as it is assumed they will wait until a head pops up or they have a clear shot, in addition to being able to select the target figure so do not require the 'exceptional damage' double throw to pick out officers etc). 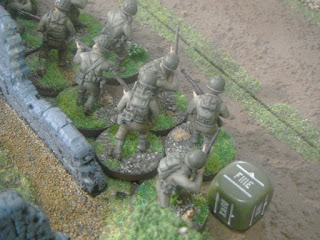 Still all to play for entering turn 5. I should point out that the scenario does allow for reserves to enter on the designated enemy flank up to 24" at this stage, but I threw everything in on turns 1 & 2 as the objective was close to the centre of the table.

Turns 5 & 6 to follow, a dice roll then decides if there is to be a final seventh turn.