Before clearing off the table for another game I took a  few shots of the Germans laid out. They represent in Bolt Action terms a 'reinforced infantry platoon' that gives me lots of options as to points selection. For example, for a small 500 points game I might just field a couple of veteran squads riding in half tracks, and select additional teams from MMG's, medium mortar, sniper team and A/T Panzershreck team.

A few more notes on the rules, where troops arrive in transports each transport gets it's own order dice in addition to the troops inside, and so long as they are on board can fire the machine guns where fitted. This gives an opportunity to move in close and put down suppressing fire before dismounting and assaulting.

The command (HQ) teams you can see are as follows:

Platoon commander (leutnant) gives plus 1 to morale throws. Also two men with SMG's to support him (ie, take the first hits if required!) There is an 'exceptional damage' rule in BA that works quite well in that when you roll to wound/damage (after you have rolled for hits /pin), if a six is rolled you get to re roll it and if another six is rolled it means the firer gets to select the casualty rather than the target, so you get to select the NCO and his removal adds another modifier on the morale throw. Works the same when firing at 'small teams' (less than three figures), you can select the gunner model to kill if you score exceptional damage, but small teams attract a further modifier on the 'hit' rolls. A small team 'down' in soft cover can be very hard to get at! The Germans get a special rule that allows them to replace fallen NCO's from the ranks to represent initiative and training on a D6 roll.

One more thing about firing, when the required score is 7 or greater (on a D6)  it's a virtually impossible shot, but you DO still get a chance by rolling a 6 followed by another 6. I have done it a couple of times and every shot counts in this game.

Buildings, oddly enough you can't fire even HE shells at the buildings themselves, only target those inside it and with a hard cover modifier it's hard to dislodge troops this way. Been a bit of debate around this but thems the rules. HE hitting troops in the open can be devastating and can easily knock out an entire squad bearing mind that if a unit loses half it's men in a turn it has to take a morale check, there is no routing off board in BA, when a unit's gone it's gone.

Mortars are useful once you get them ranged in, it's best to select a stationary target because you need to range in on a target by rolling an initial 6 first turn, then it drops by one each turn so a 5 or 6 next turn etc. So long as the target remains in position the mortar is ranged in and can drop it's shells on the target. The mortar team includes a 'spotter' figure but he shares the mortars order dice so that you get to activate either the spotter or mortar. Once you have him in  a position where he can see a target the mortar can attempt to range in indirectly using his LOS so you can hide mortars in a safe spot, range in and fire away.

Panzerfausts are one shot 'shaped charge' weapons with a range of 12" and a penetration of 6. Once fired the figure can only fire his rifle after that, they will tear through the side of a Sherman with impunity. 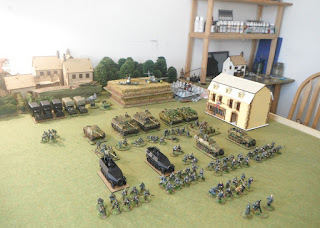 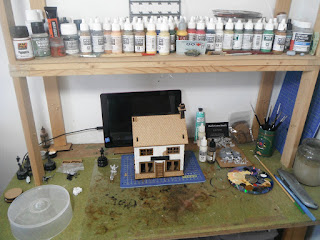 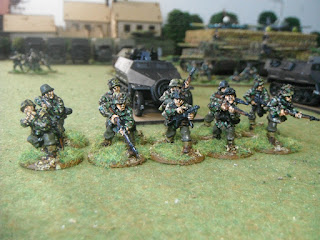 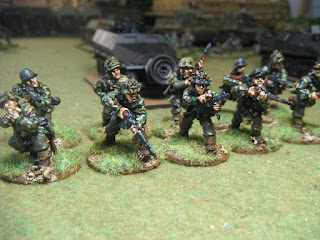 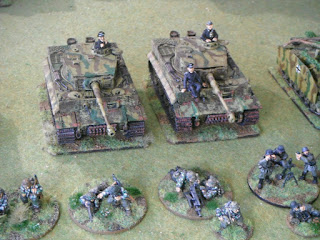 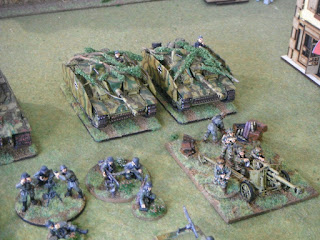