Really enjoyed painting this squad, will get the bases finished later today hopefully once I have cut the grass, never a favourite job of mine. Again went for generic cammo pattern using the Vallejo 'Splinter' 4 colour set followed by a thin wash of sepia ink. Overall this squad sits well alongside the other three in the platoon. As usual the Warlord castings have superb character faces that reward a careful paint job. 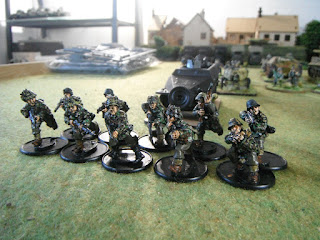 Next will be the six figures to complete an additional 'inexperienced' squad. These six figures have been selected from the 'Last Levy' box to represent a late war mixed squad of Hitler Youth, old men and the odd regular. Some of the figures in the set represent young children, and I decided against using them, instead selecting a mix of uniforms and civilian clothing with the more mature heads. The commander is the brilliant obese party official in brown jacket, I can't wait to paint that face! Weapons for the squad are mixed, but with so many panzerfausts available you would not want them anywhere near a Sherman. 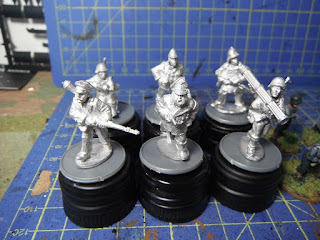 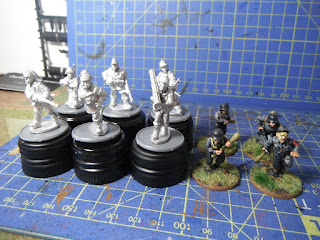 Recently I saw some great photos of the Warlord anti tank trap set so ordered one. I hope to order some MDF bases this week to make them up. I still see plenty of these concrete blocks all along the coast here. I'm also going to order MDF bases to make up individual back yards for each building with fence, walls, even the odd outside toilet (anyone make outside loos in MDF?).  Again it will add depth and more cover to the game and generally dress up the table. 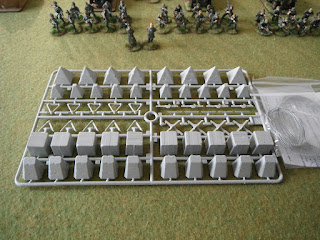 Finally, it's a beautiful day here, lots of people already on the beach, fishermen being towed by tractor down to the incoming tide, Tom and his donkeys will be giving the traditional rides along the sand. I watched this wonderful film yesterday following one US war correspondent's journey through London, onto Plymouth, boarding the landing craft to Omaha, into Normandy, on to Paris, and on to Germany. One of the best I have seen and filmed in colour. Made me realise just how lucky those of my generation are not to have lived through such a war. Not been able to get it out of my head. If you have never watched this before it's a gripping film, delivered as a lecture it's pretty moving at times, recommended viewing. I'm glad Bolt Action is just a game. Have a peaceful Sunday.