Before I post the battle report I thought I would grab a shot of all the US 'Tank War' vehicles together as I have been working this week on the seven Sherman tanks that I now have, six M4's and a Firefly. All are genuine Warlord kits, the Firefly is a resin and metal kit, the rest plastic. Together they look pretty impressive, and it's been in my mind for months now to recreate my old 'Flames of War' armour collection in 28mm scale. To this end I have another Firefly and another M10 tank destroyer (both resin and metal Warlord kits) on order and that will complete my US armour.

You can see there has been a fair bit of additional work to the kits with added stowage, metal crew and cammo netting etc. I am still considering a final drybrush to bring all of the tanks together tonally.

On the painting table is an M3 half track to tow the 3" anti tank gun, several 'character' figures including the first of the French Resistance fighters, a butcher and cafe owner. For the Germans a Marder tank destroyer (resin and metal) and command armoured car (resin and metal) will complete their 'Tank War' force. I am getting close to be able to take a break from this project soon. I also have some 20mm plastic Russian Priests that I want to paint for 'Conrad Kinch' having had them here for ages, they are finally undercoated and will get a paint job this week. 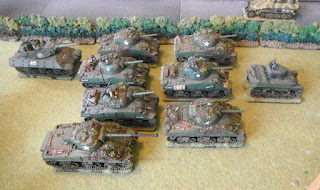 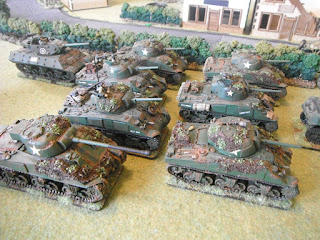