At this stage I decided to put down some notes on how the rules play in order to help me retain it in my head, more useful than a full game write up, for me at least.

The battle was over by turn five with the Soviets being driven back right across the front. Only one squad managed to get forward enough to occupy a building where on turn five they did fight off an assault, but with the T34 burning in the alley beside them and no support they had no chance of reaching an objective as the way was covered by a German MG42 deployed in MMG mode.

The assault rules in BA are simple and brutal, no other way of describing it, both sides lose all pin markers (pins represent suppression), as the adrenaline kicks in and men fight desperately for their lives, so no 'to hit' throw, just the throw to 'damage' which for regulars is a straight 4 plus throw. In a normal open fight situation attackers fight first, casualties are removed then defenders fight back. Assaults can only be made on a 'run' order which gives infantry a 12" 'charge' move effectively.

There is an opportunity for the defenders to open fire if they have not already taken an order that turn, and subject to the attack coming in from over 6" away (surprise attack if less than 6"). Where an assault is made against a defended obstacle (ie wall of building etc), both sides fight simultaneously, as was the case here, the Germans losing four men and the Russians two men resulting in the entire German squad being lost! Where assaults result in a draw you simply fight a second round, or even third round straight off until one side loses, I said it was simple, but somehow it works!

A few notes about 'pin markers and pinning', Having played a few run through games now I'm aware of the importance of using machine guns to suppress the enemy, even where no casualties are caused the high rate of fire of machine guns giving a high chance of scoring a pin. If we look at the German MG42 ('Hitler's Buzzsaw) for example it can be carried as part of an infantry squad where it gets three shots for the gunner and loader, or deployed as a fixed team in MMG mode where it gets four shots and has an additional loader. In order to represent the higher standard of training and weapon quality however the German's get to add 1 shot/dice which gives them powerful firepower every burst. With a five dice throw you are likely to get at least the pin (only 1 pin per turn however many hits), and once you put two or three pins on a regular infantry unit it's hard to get them to follow orders without rallying off the pins). Of course playing Russians means you do get to re roll failed morale checks (under the  'no going back' special rule) and the Commissar will likely shoot anybody who fails to follow orders.

Medics are fun, keep your medic within 6" of your units and you get to make a save roll (6) to save a casualty. There was a funny post on the BA forum re medics and assistants recently where it was suggested that a triangle of 3 medics would produce endless save opportunities, until pointed out that you can only take a single medic, but he or she can have assistants such as stretcher bearers who do not make save rolls, but may carry sidearms. This then led to a debate a round medics using pistols to defend themselves. Personally I play no medic sidearms unless used in self defence, or it makes them fair game as a target!

I had to think about the sniper rules and look them up again, but again very clear and straightforward rules, if your sniper shoots HE picks the target and ignores all cover modifiers as he will wait until a head pops up before he takes his shot. IN my case  I ordered the German sniper  deployed in a building to try to shoot the NCO of a reduced and pinned Russian infantry squad in soft cover, so a sniper will only really miss on a throw of one. One shot only of course, he put a third pin on them but missed his target. With BA being a one to one scale game you do get drawn into these man on man situations which is quite fun, I imagined that bullet whistling past the Russian NCO's ear and the entire squad throwing themselves down.

The T34 had a tough game, surviving two panzerfaust shots and the first shot from the Tiger, it was hit on turn 4 by the Tigers second shot, and with the Tiger classed as a super heavy anti tank gun (penetration 7) it scored massive damage and the T34 immediately went up in flames. It did get off one shot against the Tiger, but failed to penetrate it. Again even the Tigers hull mounted MG can pin and cause casualties and can select a different target to it's main gun, against enemy infantry it's lethal.

If I am honest I missed playing the Americans with their special 'fire and manouevre' rule that allows them to move and fire with no penalty for moving, this entire game was sold to me as 'Saving Private Ryan on the tabletop' and no doubt that's the campaign I enjoy playing most. The Russian tanks are better against the big Panzers, but still vulnerable.

A few more pics to be going on with, on Monday being Bank Holiday eldest daughter was over so as usual I took my Grandaughter Crystal upstairs as she likes to see 'Grandads room'. With the new houses on the table her face lit up and she spent a supervised half hour moving all the figures around, hiding them in the buildings and generally enjoying herself, after which I abandoned the game! Still, I love watching her playing with them and her Dad as usual brought me a lovely selection of beers from the wholesale place he uses, have to say I'm coming round more to the lighter 'golden' ales, the 'Firecatcher' has an amazing depth of flavour for a 3.5 ABV beer, one of the best I have tasted. 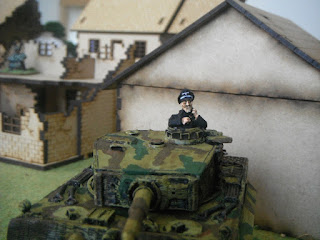 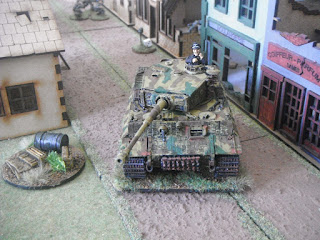 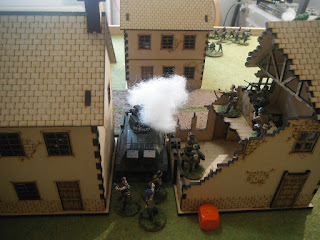