I recently wrote here regarding the clever marketing campaign mounted by Warlord Games to promote and sell 'Bolt Action' and the high cost of related products. Now, I may be somewhat out of touch on the current average price of 28mm plastic and metal figures but I'm sure that £3.25 for a single metal command figure must be right up there! The metal Warlord figures come in handy 'squad' sets of 10 men, but average £16.00 for the set, so £1.60 per figure. The plastic 'multi part' figures also come in at around £1.00 per figure, and for that you do of course need to stick them together.

All in all I know I could have done this far cheaper with metal 20mm figures and AFV's etc and seriously considered starting again at one point, but even I have to admit that I have now fallen for this game and it's related merchandise to the point of no return. The more figures I paint ( and I'm expanding both armies with metal figures from Warlord now), the more I want to keep going in this scale.

So this weeks progress has been to work up the Sherman  to a more convincing shade of green, add another six man German infantry squad and a two man Panzershreck team. The anti tank team are both Warlord castings (and I still have a sniper team and a flamethrower team to paint), and the squad commander is a lovely casting picked up on ebay for £1.00. All of the figures, both plastic and metal have very realistic characterful faces that I really enjoy painting. Like the Bazooka, the Panzershreck can punch through a tanks side armour with little problem, and in Bolt Action a 6" move with a 24" range means tanks have to be extremely aware of where on the field they are.

I have a US mortar team to do next, again Warlord metals, followed by some US Airborne squads. I could only find more plastic US infantry so went with the metal option and I have to say they are amazing castings, and should be at £1.60 per figure. The StuG is now assembled and waiting for it's job.

I'm happy for now with the terrain slightly underscale but looking very acceptable to me even with the large tank model on the table. Doubling up the main roads does seem to look better too, with single narrow track running off. Still adding more terrain features. 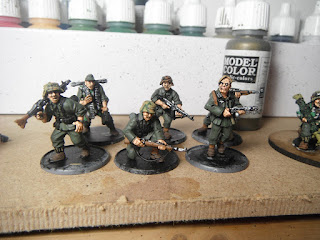 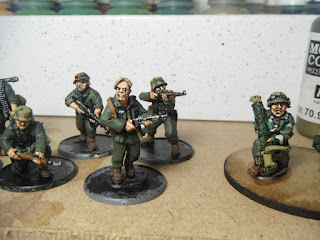 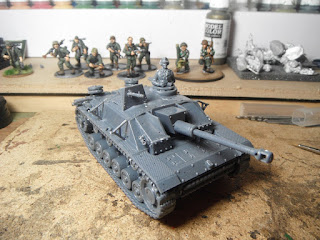 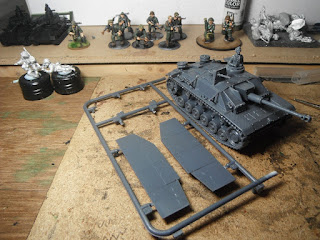 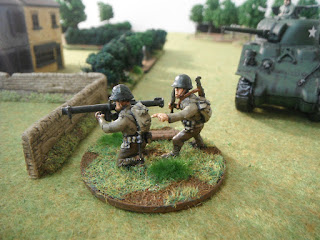